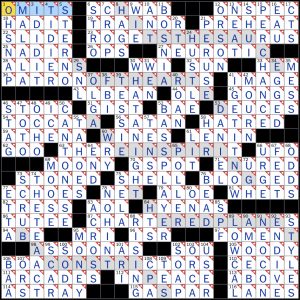 63A: THERE IN SPIRIT [Present without being present]
– Common core: AWE INSPIRING [Truly magnificent]

106A: BOA CONSTRICTORS [You wouldn’t want them to have a crush on you]
– Common core: BACON STRIPS [Breakfast side dish]

I don’t know that I’ve seen a theme like this, and I enjoyed it! Each themer shares a long letter string with the shaded, diagonal entry that runs through it. I appreciate that this puzzle scratched the cryptic itch in my brain – I love finding phrases that are related in unexpected ways like this. Hilariously, I didn’t even see the set of Diagonals clues at the end of the clue bank (in the on-paper version) until I went to review this puzzle! Hopefully, you saw them (there or in the Notes section). But how cool is it to have squares in the grid that are triple-checked – no excuse for not being able to eventually suss those out!

Most of the theme entries / common cores were fun and vibrant, many with humorous or intriguing clues (my favorite themer clue was certainly the one for BOA CONSTRICTOR), though I’ll admit I got a bit squeamish at HITS THE SAUCE, knowing so many folks in my life who struggle with alcohol dependency. I at least appreciate that that entry didn’t get a winky/pun-ny clue.

Something I appreciated about this puzzle were the bits of fill that could have been clued in myriad ways, but were clued in ways that acknowledged people, experiences, traditions, or realities of folks outside the cis straight white male sphere. It’s not that cluing this way is better (or that experiences outside that sphere are), but making more people feel seen and their experiences feel valid by being referenced in THE crossword of note does matter. Some examples from this puzzle:

– Cluing FBI via [Govt. agency that Jimmy Woo works for on “WandaVision”] and IMAGE via [N.A.A.C.P. ___ Awards] – both matter-of-factly reference non-white people/culture in a way that says, “this is important/culturally-relevant knowledge, too.”
– Similarly [Sit shiva, e.g.] for MOURN clues the fill in a way that gives a nod to Jewish traditions. The clue doesn’t have to do that, but I’m glad it does.
– Love seeing [She/___] for HER as a common pronoun cluing method these days. Cluing HER like this might invite the conversation about pronouns to someone who doesn’t understand why they’re important or doesn’t have to think about it on a daily basis. It’s also a great mirror for folks for whom pronouns are a daily, fundamentally important identifier.

That’s all from me for now – let me know in the comments section what you enjoyed about the puzzle!

A Meta with two answers! Hoo boy. Let’s get to it.

THEME: ???? Theme clues are all multiple choice though…. 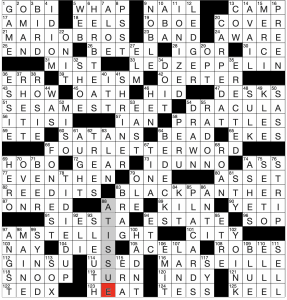 Well, I’m gonna try solving the meta on the fly right now since I just finished solving the grid right now (Sunday morning) and I should probably get a post up soon. I did notice a coupla things, so here’s to hoping I have an inkling of an idea.

The first thing I noticed after entering BEER for Heineken product was I entered AMSTEL LIGHT shortly after. The reason I noticed that is because I thought to myself “Could be AMSTEL LIGHT too!” as the answer for Heineken product, since Heineken makes AMSTEL. Then I remembered the central clue: [What is another term for a bit of strong language (seven of which in the puzzle will help you solve one of the meta answers)? A) Figure of speech | B) Five-dollar word | C) Four-letter word | D) Four-word phrase].

And BEER is certainly a four letter word. Let’s see if that can get us going.

LED ZEPPELIN is a BAND. (23-Across) Oh yeah, this is definitely going somewhere.

Now what? First letters don’t seem to do much. Very strange that the clues themselves are worded like questions. Almost has a Jeopardy! feel to it. Makes it extremely easy to fill in the correct answer. Also, what to do with the incorrect answers if anything?

I’m also now noticing SLEUTH and INDY are in there… and that sounds like Dr. John Watson and Indiana Jones, two of the wrong answers for one of the questions.

What if we line up the four letter words above and look at the corresponding letters to where the answer for each of the initial multiple choice words were found? Let’s give it a shot.

GAME (Mario Bros was the 3rd choice, so let’s highlight the 3rd letter).

MASTERY! Hey that’s something! So… I’m guessing that’s one of the meta answers.

Before I move on to the other, I want to give a shout out to the mention of the obscure song Big-ASS Rock from the (fantastic) musical The Full Monty. A lot of solvers are unlikely to know it, but here’s to hoping a few will now give it a listen. It’s a comical song about three down-on-their-luck friends contemplating suicide, and it includes one of my all-time favorite lyrics “I’ll buy you a beer with a Drano chaser…”

Alright, I’ve stalled long enough. No idea where to start in finding the other meta answer.

I’m going to post what I have and perhaps update it after I let it marinate for a few moments.

Wait a second… maybe it’s not a completely different method to find the second answer. That doesn’t sound like it would lend itself to a tight idea, and the WaPo is always tight. Instead let’s try the same exact thing that we just did to get MASTERY but with the original answers themselves:

Look at that! RESULTS!

RESULTS and MASTERY … two outcomes of some tests.

That was awesome. And so very extremely satisfying. An excellent *click*

As always, extremely impressive concept and execution by Evan.

THEME: Both parts of a two-word phrase can follow the word BACK. 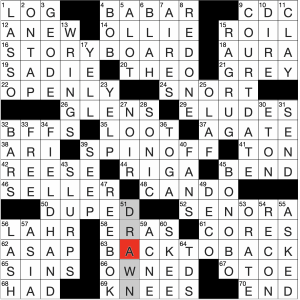 As far as a “words that can precede/follow” theme, this one is pretty excellent. Mostly because the revealer gives it an extra kick, in that the words that can follow BACK are indeed BACK TO BACK. Nice!

I’m not so familiar with Backcourt and Backfield. Sports terms? Unsure.

My favorite misreading of a clue:

Oh wait… just now noticing I missed a themer! It’s an entry that I filled in without looking at the clue.

SPIN OFF. Backspin. Back off!

Theme: Every themed answer repeats it’s “SEE” sound to “say again,” with the S in “say” hinting that it will be an S-driven sound. 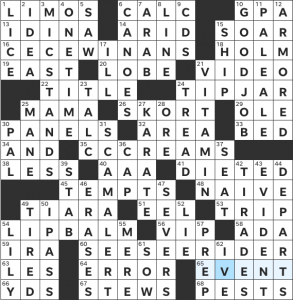 This was a fun theme. I appreciated that the S in the puzzle’s title alluded to the sound in the theme answers. It was also clever that each once used a different variation to elicit that sound, especially since it was at the start of each answer. I know this is to avoid using the same word over and over, but I thought it executed nicely.

A lot of long answers in this grid, particularly on the right side of the puzzle. I thought that the southeast corner in particular had some good ones, with 42d [“Bitter rants”] TIRADES, 43d [“Plain to see”] EVIDENT, and 44d [“Hits the road”] DEPARTS making for a nice sequence of seven-letter answers. SCAM ALERT was also a solid nine-letter answer clued as 31d [“Fraud warning”], and I thought that MIC STANDS was also clued pretty accurately as 3d [“Props for emcees”].

Overall, 10d [“‘Nice work!’”] GOOD JOB on this grid! I enjoyed a lot of the longer answers and the theme was well-composed.

Theme: Certain astrological signs are given a horoscope reading using an idiomatic expression related to that sign. 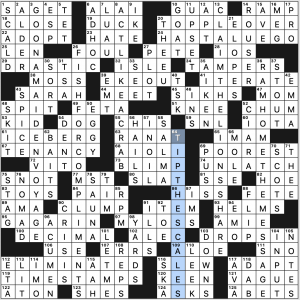 Pretty nice, yeah? Not sure about RAM HOME THE MESSAGE. “Ram home the point” seems more common to me.  Also, I can’t expect that there would really be twelve full-length entries, but it seems odd to only have six horoscopes. Maybe there will be a Part II next Sunday? Let’s see…what’s missing, and what are some potential theme answers.

Oh, and why are the entries in the vertical direction? My guess is that since the title is “Horoscope Column,” and columns are vertical…there you are.

A full load of theme material means less long fill, but we still get the likes of HASTA LUEGO, TOPPLE OVER, and TIME STAMPS. Not super sparkly, but plenty solid. 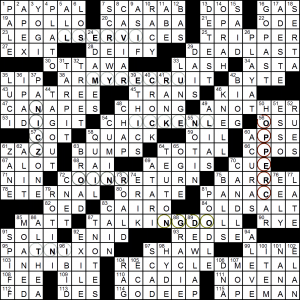 The theme in today’s puzzle will most likely be an after-solve solve for most people as it is quite buried. “Scrapper’s delight” is a clever title, but we get a second, more revealing, revealer at the end: (RE)CYCLED METAL. I added circles to help pinpoint where in the answers to look; without those it is quite easy to miss the concealed words. Amidst mostly fairly prosaic two-part answers, there are nine metals anagrammed between the parts. I appreciated that all the metals chosen are elemental.

An outlier in terms of familiarity in the theme answers was PANICZONE, concealing ZINC. The song did not chart and the album it’s from isn’t as well known as the follow up. That said it was nice to have two thematic references to Hip Hop music in a puzzle.