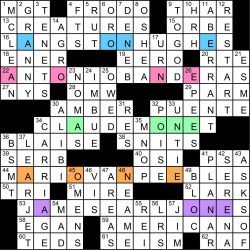 Good day everyone! The chill is in the air for a good portion of the country, so here is hoping everyone is staying warm. (Geez, wasn’t I just talking about hoping everybody was staying cool?)

We have some first-class men included in today’s puzzle, and they’re so highly regarded that the letters A-ONE are featured, in that order, in their names. The circles highlight that feature of all of the theme entries.

Along with the theme, which highlighted great entertainers of color, we also have PUENTE representing on the music end (32A: [Bandleader Tito, aka “The King of Latin Music”]). Liked a lot of the long downs in the corners, with with LEAR JET (37D: [Executive’s aircraft]) and RESTART being my favorites, as the latter reminds me now of the issues I’ve been having with starting my laptop/awakening it from sleep mode (12D: [Problem-solving PC command]). Maybe I should cut it off once in a while instead of running it days at a time! It’s been a little while since seeing our old architect friend, EERO, in a grid (19A: [Architect Saarinen]). Can the patriarch, Eliel Saarinen, get some love sometime soon? Because of ESPN sportscaster Chris Berman giving former Major League Baseball player Scott Podsednik the nickname of “The Scott Podsednik Adventure” years ago, that allowed to, after finding out where it came from, read more about, and then watch, The Poseidon Adventure, directed by Ronald NEAME (48D: [Director of “The Prime of Miss Jean Brodie”]). Great cast, OK movie. Maybe I’m a rough critic.

“Sports will make you smarter” moment of the day: MCLEAN (1D: [“American Pie” singer Don]) – For the second straight week, the focus is on a hockey goaltender, which is fitting because the NHL regular season started last week. Former NHL goaltender Kirk McLean was one of the last goaltenders who played the “stand-up” style of goaltending, as opposed to the widely-used (and, most likely, universally-used) butterfly style, where goaltenders drop to their knees to make saves. McLean was a finalist for the Vezina Trophy, the award given to the league’s top goaltender, on two occasions (1989, 1992) and, in 1994, was the goaltender for the Vancouver Canucks on their run to the Stanley Cup Final. In that series, they took the favored New York Rangers to a seventh game before losing to the Blueshirts at Madison Square Garden, giving the Rangers their first Stanley Cup victory since 1940. 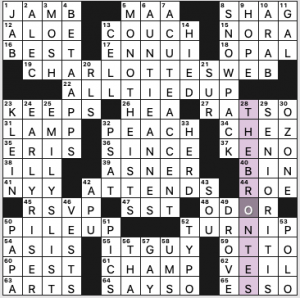 This one’s for the English majors. The puzzle has left/right symmetry, and three of the four themers are Downs abutting other entries of equal length. The theme clues are marked, but it’s maybe asking a lot of newbies to find themers that don’t jump out at you in the grid. We get 28d. [Literary trio found in the answers to this puzzle’s starred clues], THE BRONTËS, and a possessive for each of the sisters:

I don’t know that there’s a thematic rationale for the ‘S bit. Perhaps nothing more than that they offer a way to include just the first names, and not non-Brontë surnames.

Tech terms not in my vocab: 40a. [Small interval for grouping data, to a coder], BIN, and 4d. [Downloads in the testing phase], BETA APPS.

3.75 stars from me. The less familiar (to a beginning solver) fill knocks this down some.

Theme: The SEVEN SEAS (66a, [Global group, and a hint to the starts of the starred answers]). While there are more than seven seas in the world, here are seven that fit within the confines of a crossword puzzle and whose names also start familiar phrases. 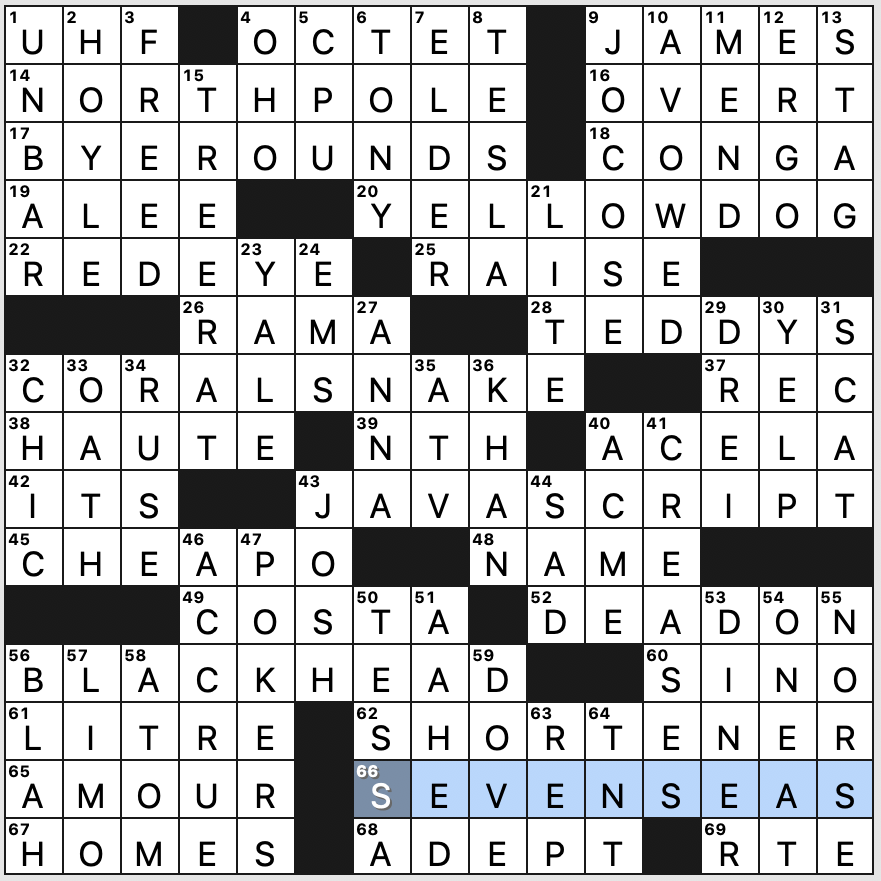 I definitely needed the revealer because I couldn’t make any connection between the entries otherwise. Had a nice aha moment once I got it.

It’s unusual to have non-theme answers that are longer than theme answers in the same direction (BYE ROUNDS and SHORTENER), but the asterisks make it clear which entries are thematic.

BYE ROUNDS is a nice entry and has a deceptive clue [Inactive periods for seeds]. I was totally thinking botany, and when I couldn’t parse the beginning BYER___, I needed several more crosses for the penny to drop. A good time.

TREE RAT and CHEAPO are other fun entries, and JOCOSE [Humorously playful] is one for the word nerd. I wanted JOCULAR but it didn’t fit. 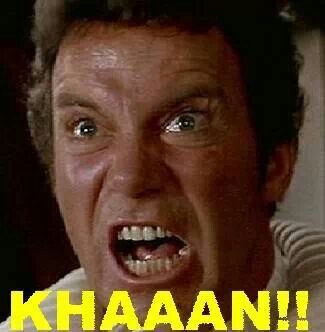 Eight theme entries, even though some of them are on the short side, still put a strain on the fill, so we get things like plural TEDDYS (first names, not articles of clothing), and partial ONE AT. But overall, this makes for a fine debut, so congrats to our newest constructor. 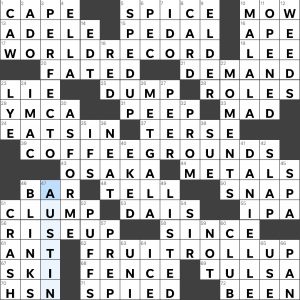 Theme: The word “cup” can be added to the end of the first word of each themer to form a new phrase.

A descriptive title explains today’s theme and when you “Add a Cup” to the themers, it makes the international soccer (football) competition WORLDCUPRECORD, and depending where you live globally you might be drinking from a COFFEECUPGROUNDS while watching the matches, or even eating sweet treat such as a FRUITCUPROLLUP. These are great themers and the theme transformations are excellent too, not to mention the fun clues.

Feels weird to say that this puzzle took me back but it really did. So much in this puz was delightfully nostalgic, drawing on knowledge and bringing up memories from childhood through college years. It really spoke to me and I had a great flow when solving it. I haven’t thought of many of these references in a long time, so it was equally impressive that their clues hit on just the right triggers for me when filling it in. What a joy! Can’t wait to hopefully see more collabs from Brooke and Mark! 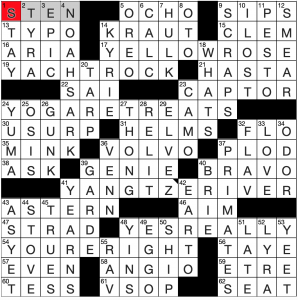 The title kinda gives away what is going on. All the themers have the initials YR:

Nicely done. My Across Lite still doesn’t like the Jonesin’ file when I start the puzzle and doesn’t get the timer going, so no idea how long this took me. But it wasn’t too long. A lot smoother than a normal Jonesin’ mainly because there isn’t too much obscure pop trivia in this one. Fun stuff, Matt! 4.4 stars from me. 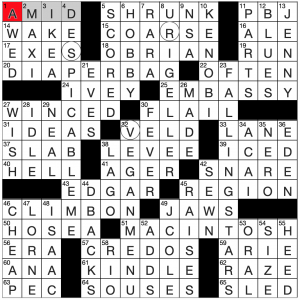 Sorry for the delay; I solved the wrong puzzle! Here are the theme entries for Tuesday’s puzzle!

We have the stars Spica, Rigel and Vega starting in the circles of a few down answers, so they are literally “falling” down the grid. I like it, even though I had to make sure Spica was the correct star name! Not as familiar with that one, and I didn’t want to insert a tasteless word in the review! Nice puzzle, David! 4.4 stars from me.

THEME: People who are involved with courses 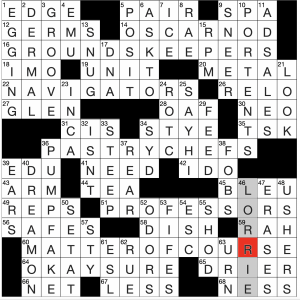 The featured editor today is Amanda Rafkin! And a fine job with this puzzle. Interesting theme that feels both loose and tight at the same time. And some great fill: OKAY, SURE. PUMP FAKE, OSCAR NOD are faves there.

The unfamiliar LORRIE crossing DRIER was difficult for me as I am never sure if it’s an I or a Y in DRYER, and spelling a name LORRYE looks strange for sure, but I’ve seen a host of stranger name spellings as a teacher for 15 years. So I convinced myself LORRYE was correct, but quickly changed it when the happy pencil didn’t appear.