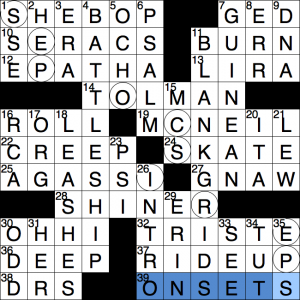 hello and welcome to episode #698 of matt gaffney’s weekly crossword contest, “Things Are Looking Up”. for this week 3 puzzle of TENTH MONTH, the instructions ask us for a 10-letter word. okay. what are the theme answers? it would appear that the two 10-letter down answers in this small (11×11) grid are thematic:

so that’s intriguing, for sure. matt has previously done a battleship meta; it still stands out as one of the highlights of MGWCC even though it was over a decade ago. but what about this one? we have an 11×11 grid with … let’s count ’em, 21 black squares. oho! since 11×11 = 121, there are 100 white squares, just enough to fill a 10×10 grid. so these two clues in combination are telling us to take a BLANK GRID that’s 10×10 and put in no black squares, instead using all 100 letters from this solved grid:

i must confess that after making this 10×10 grid and with the firm idea that i was on the right track, it nevertheless took me an embarrassingly long time to find the answer. the title says we should be “looking up”, i.e. looking for a 10-letter word reading from bottom to top in this grid. have you seen it yet? i scanned the whole grid several times before finding… ELAND in the second column from the right.

okay, ELAND isn’t the answer. it’s right there in the first column: PERISCOPES, quite a fitting answer considering that’s what they use on a submarine for “looking up”.

this is a neat meta with some head-scratching aspects. on the one hand, i very much admire the straightforward audacity of the mechanism, and the click was very strong once i grokked what the two theme clues were telling me. so that was satisfying. the fill felt a bit ragged, with SERACS, EPATHA, and TOLMAN in particular all in the top section of the grid, when the meta mechanism only constrains ten scattered squares in the puzzle in addition to the two overt theme answers. the bottom of the grid had smoother fill despite an equal concentration of constrained areas.

but the part i’m still scratching my head about a little bit was the connection to BATTLESHIP. it’s interesting because nothing about BATTLESHIP other than the grid size was essential to the mechanism—which is fine and good, because (as i mentioned above) matt’s already done a quite memorable meta based on the battleship gameplay mechanics. but then the final answer seemed to tie in to battleship rather than to the idea of the meta mechanic itself, which is squidging the white squares in a 11×11 grid down into a 10×10 grid with no black squares. to put it another way, if the two theme answers had been BLANK GRIDS and ONE HUNDRED, clued as something like {Number of white squares in this grid}, the puzzle would have worked the same way and there would have been no particular reason for the answer to be PERISCOPES. so i’m still a little iffy on the raison d’être of the meta answer.

well, that’s all from me this week. how’d you like this one?