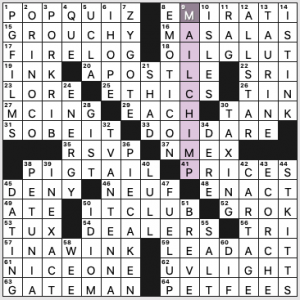 Pretty diagonal through the middle of the grid, no? I’m generally not wild about themelesses that are densely populated by 7s and indeed, only a few of the 7s (POP QUIZ, GROUCHY, PETUNIA, PIGTAIL, ST. KITTS) call to me. Stuff like GATEMAN and a single, solitary PORK RIB? Meh.

3.75 stars from me, but a lower score for the editing with that ZYGOTE issue. 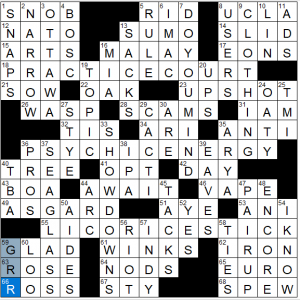 THEME: Center Ice: -ICE- is in the center of each themer

Easily accessible theme, and I like that the symmetric themers break up ICE in the same way, and the odd one out that uses the word break is the central entry. It works, and works around the difficulty of finding a two-word phrase where the first ends in -I.

I quite liked most of the downs that cross multiple themers: SEAGLASS, SHOWDOWNS, and DO YOU MIND. Not much else in the fill that stood out to me, but nothing that raised an eyebrow, either, which affects my solving enjoyment more. 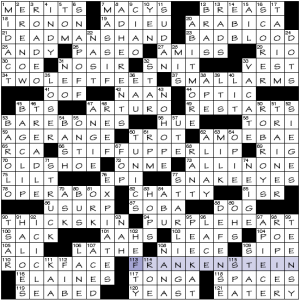 Not sure what to say. On the one hand, many of these are stretches as items that could conceivably comprise Frankenstein’s Monster. On the other hand, a defining characteristic of the story and mythos is that the creature is a ramshackle affair. So is this crossword’s theme a metacommentary? Or am I just giving the constructor the benefit of the doubt, letting him have it both ways? 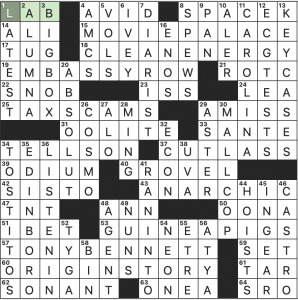 I have seen Jamey Smith’s byline a few times now. This was a fairly quick solve, but still a nice set of interesting entries. Gonna be a quick review today, as we are out of town for a short but well needed break! I am just happy I made no errors! (And you’ll have to trust me, as Black Ink doesn’t SHOW error marks!) 4.3 stars for this one.

I will stop there, but I could go on! Enjoy some James Taylor! This is a nice acoustic version. 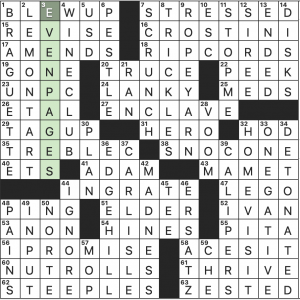 I AM getting used to Greg Johnson’s puzzles, finally! This one had me totally flummoxed at first, but it finally fell. The NW corner was the part that gave me the most fits, but after actually THINKING for a moment, it all worked. As mentioned in my LAT write-up, the solve was done in Black Ink, which doesn’t show error marks, but you’ll have to trust me when I say I had none! Again, a very nice puzzle from Greg, which comes as no surprise! 4.6 stars from me.