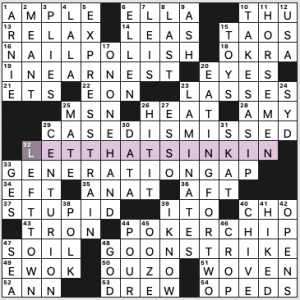 Quick and breezy! A shame—it would have been nice to have to spend more time piecing together Robyn’s puzzle.

Fave fill: NAIL POLISH (followed by the “ladies’ fingers” clue for OKRA), CASE DISMISSED, “LET THAT SINK IN,” GO ON STRIKE, EXPRESS TRAIN, LEFT TOWN, EATING FOR TWO. LEAS, EFT, ANAT, and ESSO were on the “meh” side, but overall I did like the puzzle.

A little bird told me that Judge Vic’s co-constructors are two sisters. Checking the database, they had their debut back in July in the Inkubator.

This one is a breezy, clean solve with a simple theme: Six-letter words preceding nine-letter words which are actually the first words plus a three-letter prefix. If you’re keeping score, they each add up to 15-letter grid-spanning entries. 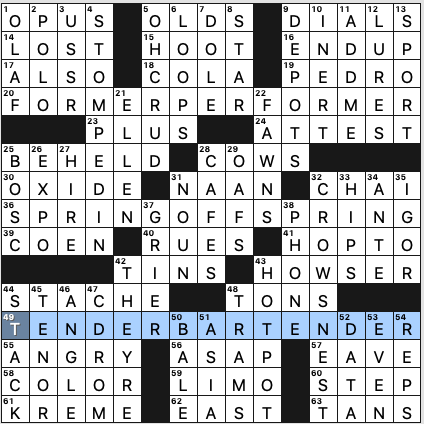 Cute and tidy. I happened to just see the latest James Bond film the other night (first time in a theater in gods-know-when), and I can’t help repeating each of these entries in Bondian fashion.  “TENDER. BAR TENDER.”

Surely, a fourth grid-spanning entry could have been found, but three makes for plenty of theme material, and a fourth might have gummed up the works.

As it is, the fill is clean with nice entries CROW’S NEST, “OH CRUD,” and HOT POT. I’m okay with STOMPED IN [Entered loudly], but I really wanted it to be STORMED IN.

Whoa. Just noticed there are no three-letter entries in the entire grid. Don’t know if I’ve ever seen that before. A nice little feat that. 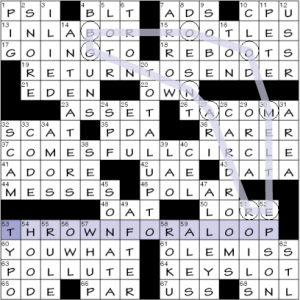 What goes around comes around, as they say.

Traveling clockwise from the first circled letter reveals BOOMERANG as the name and shape of the object in question.

Can’t say I’ve seen this theme before, and it works well.

Time for my customary tour around the grid.

Theme: Each themed answer is comprised of two words that begin with RE and DO respectively and the key is the first two letters of each word. Together, we get some “fresh starts” with REDO. 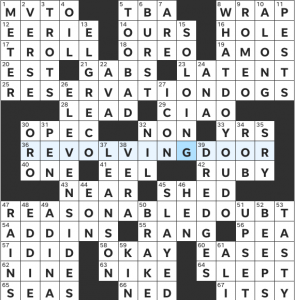 This was a tricky theme, but I thought that the theme answers were awesome. Both RESERVATION DOGS and REASONABLE DOUBT were excellent grid-spanners. I also appreciated the complexity of the title of the puzzle. The fact that “Starts” is plural is key to decoding and looking at the first bits of each word in the answer. I’d say that this theme is more difficult than usual for the USA Today puzzles, which is a good thing, I think, for a puzzle running at the end of the week.

I love the shape of this grid so much. In these early days of my constructing adventures, I’m always really nervous about having too many black squares together, so I was stoked to see the two bracket-shapes cordoning off the center segment of the grid. I almost expected to see a secret code in the letters descending diagonally from each corner. But can we also talk about EERIE TROLL appearing together in the top corner? One could even say that the pairing is [“Strange in a scary way”], per EERIE’s 12a clue. It’s ~spooky season~, y’all.

Happy Robyn Day to all who celebrate!!! A Times themeless and a New Yorker themeless! This puzzle rocked, with the caveat that there were a few pieces of fill that I think are too obscure / tricky for an easy puzzle. I wasn’t a fan of EWERS (35A: Widemouthed pitchers), MORES (41A: Social conventions), ROW A (2D: It’s nearest to the front of the stage), AS MAD (5D: Comparable to a hatter or a wet hen). I’ve solved enough puzzles that I could drop those terms in, but I don’t know that they’re super in the lexicon. 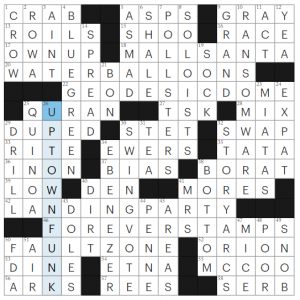 Robyn is associated with breezy, whimsical, conversational puzzles, so I wanted to take a look at a few of the things that contributed to this fun solve:

There were long entries that were super vivid in a fun way, like MALL SANTA, WATER BALLOONS, BLUE GREEN and UPTOWN FUNK. There were gently punny clues, like [They make a big splash] for WATER BALLOONS and [Hunter who sports an astronomically large belt] for ORION. And one of my favorite things, Robyn is great at taking words that can be a little downer-y and transform them into something fun. Obviously nothing is wrong with the entries DIRT (Crushed Oreos, whimsically, in some desserts) or POOR (“Give me your tired, your ___…”), but it’s nice how her clues bring to mind dessert and poetry.

Closing on an irrelevant story: Whenever I see something about corn / scarecrows (CROW: Unwelcome visitor in a cornfield), I remember part of a Laura Ingalls Wilder book where their cornfield is attacked by blackbirds. They will starve without the corn, so they have to run around the field with pots and pans, scaring the birds away. Eventually, Pa shoots some of them, and Ma cooks them into a pie. The description of the pie (you can read it here!) was so lush and detailed that it has been ingrained in my head for seventeen years and every now and then I am like “Damn I wish I could eat Ma’s blackbird pie.”

Another great puzzle from the Inkubator this week celebrating one of my favorite organizations. 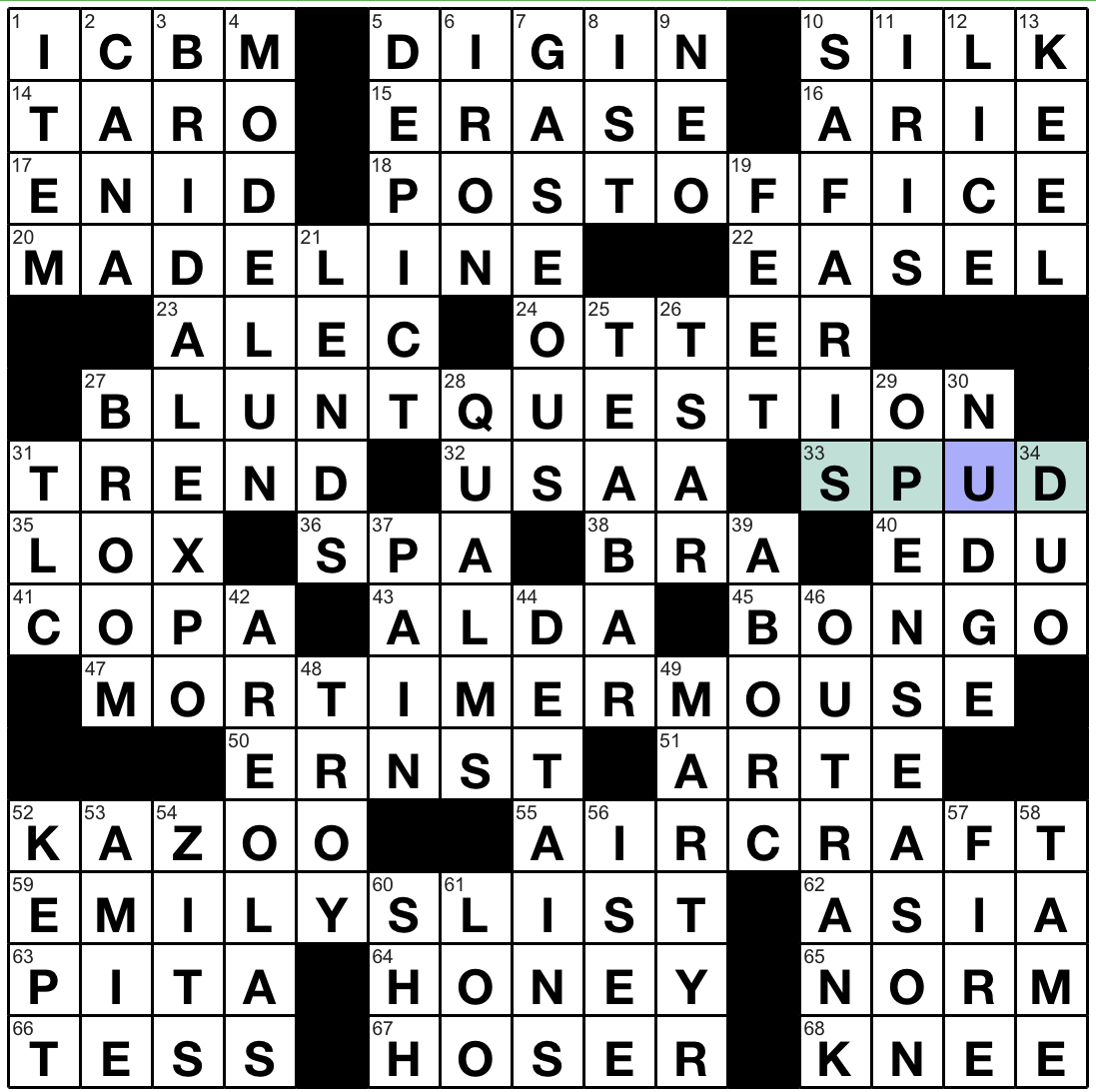 EMILY’S LIST theme today that put famous Emilys at the start of the themed entries. MORTIMER was definitely the most difficult of the three, but all worked really well with the theme and while Dickinson feels missing in any list of Emilys, I can’t think of any way to throw that name into a different phrase.

Solid construction throughout. Fun fill and cluing all around, if a little violent in the SE. Clean across the grid, with a nice mix of types of cluing which kept the puzzle moving. Loved the clues for AREOLAS [Nipple rings?], BRIDAL EXPO [Event for those otherwise engaged?], and TESS [Plus-size model Holliday].