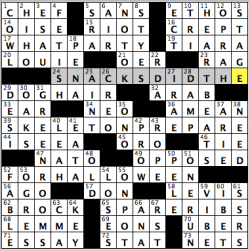 Hello everybody! Here is hoping you are all doing well and, depending on where in the country you are from, staying safe from some nasty weather systems that are wreaking havoc in different parts of the US at the same time! Sheesh!

Many hope that the weather will clear from Fright Night on Sunday, and we have a funny riddle and answer that is Halloween related that’s the theme of the puzzle. Here is hoping you don’t have a bone to pick with this joke…

I usually am not the best at puzzles in which quotes/riddles/phrases are the theme, and this was another one of those instances of having to use a lot of the crosses to parse what the riddle was. (The answer to it ended up being straightforward once I made out most of the question.) Also did not help my solving cause when I automatically put in “Cera” instead of PEÑA (18D: [“The Martian” actor Michael]). Despite those difficulties, and little extra crosswordese/partials to fill, there were a lot of bright spots, highlighted by the paralleling entries of HEARTBEATS (11D: [Per a Poe short story, under-the-floorboard sounds from a murder victim]) and GREEN ROOMS (31D: [Schmoozing places for talk-show guests]). There are a few in the crossword world who have experienced being in a green room, probably when going on Jeopardy! One of my green room experiences happened 20 years ago when on a sports trivia show and, during one of the show tapings, I personally got to meet and get an autograph from…

“Sports will make you smarter” moment of the day: BROCK (62A: [Base-stealing legend Lou]) – …the man who stole 938 career bases, a Major League record before Rickey Henderson broke the mark in 1991. Brock most certainly is a base-stealing legend, but he would not have been able to get on base all of those times without being a good hitter, as Brock also amassed 3,023 career hits and 900 career runs batted in. And to think, he started his career with the Chicago Cubs and was traded to their longtime rival, and then he blossomed into an all-time great in St. Louis. 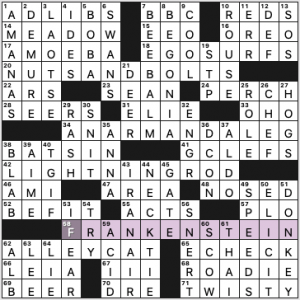 What a fun theme, especially for Halloween week! 58a. [Doctor whose shopping list might include 20-, 34- and 42-Across?] clues FRANKENSTEIN, and the components he gathers are:

Mind you, this is not his complete shopping list. He probably picked up bread and milk, too.

I like the floral zone with BEE BALM and BEGONIA beside each other. I did not know that the former is a 7d. [Flowering plant also known as horsemint]. How many animals have their own mints? There was one in the Monday Spelling Bee puzzle. Bring me the axolotlmint, please.

Toughest entry for newer Tuesday solvers: the rarely seen abbreviation ENGR. This answer makes me a little bit engry! If you don’t know what this is supposed to be and you don’t know what letter belongs at the start of G CLEFS, you’re in trouble here. Also the non-Canadian [Edmonton’s prov.], ALB. It’s AB or the old-timey Alta.; come on, now! Don’t know why it’s not ALL/LEER or ALT/TIER.

Been a while since I eyeballed the male vs. female balance in a puzzle. Here we find 13 men or male characters—SEAN Connery, ELIE Wiesel, Mahmoud Abbas, DRE, LAO TSE, BOBA Fett, CHEF Boyardee, erstwhile actor ALDO Ray, Shrek and DONKEY, Hägar and SNERT, Spike LEE—and just 2 real women and 1 fictional one, Princess LEIA, ANNA Kournikova, and Gypsy Rose LEE sharing a clue with Spike. We can do better for ANNA than a tennis player who never won a Grand Slam singles event. Sometimes it’s tiring.

Fun clue: 64d. [“Tuesday is the hardest crossword of the week,” e.g.], LIE. Provided you can wrangle ALB and ENGR!

3.25 stars from me. Really liked the theme, but the rest of the puzzle didn’t quite rise to the same level.

Looks like it’s Halloween-themed puzzles for the remainder of this week. We’re starting off today with phrases with hidden BATs (60d, [Fly-by-night creature found in the four longest Across answers]). 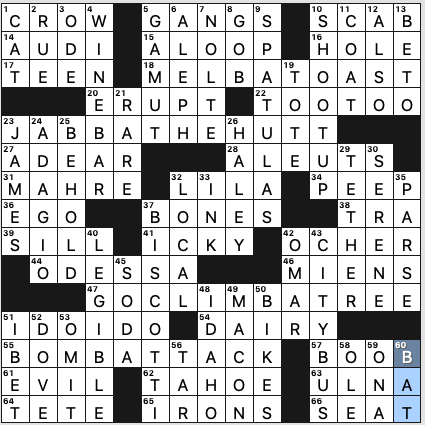 Missing: Boba tea, Zorba the Greek, take a stab at. At seven letters, BOBA TEA, would have made a fitting, central entry.

Pretty straightforward. I was hoping for something more—maybe some grid art or some additional rationale as to why the BATs are hidden. Or other hidden Halloween critters perhaps. CAT and CROW both make an appearance in the NW but aren’t part of the theme.

In the fill, top entries are BISCOTTI, WINE BAR, CITY BUS, and “BEHOLD!”

Not so keen on the proper name crossings: JAMES / MAHRE ([23d. “The Turn of the Screw” author Henry] and [31a. Slalom gold medalist Phil]) as well as HALEY / LILA ([26d. Tin Man portrayer Jack] and [32a. Marion’s sister in “Psycho”]). The M and the L are the most obvious choices respectively, but I wouldn’t be surprised if some solvers were caught out.

Another excellent puzzle from Enrique today! A fun grid, great clues and entries, and a fantastic theme. 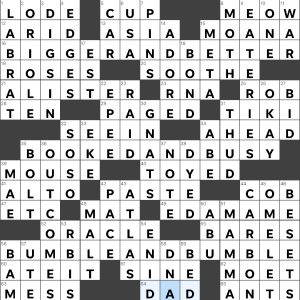 Theme: The themers are two word phases joined with “and” that both begin with the letter “b”

The title is just perfect for this theme today, modeling the format of the themer with an example that is iconic but not one of the themers today (“bed and breakfast” or “b and b”). BIGGERANDBETTER started to fill in with my crossing but once I got about half or so entered, I jumped back up and completed it. BOOKEDANDBUSY is less familiar to me, especially since I didn’t get the reference to Rickey Thompson who is a comedian of Instagram fame. BUMBLEANDBUMBLE fits the patterns yet strays a bit since it uses the same word twice but is still a fun themer and great to see in a grid.

Stumpers: ATEIT (clue just wasn’t clicking for me today), UTE (didn’t know and crossed with ATEIT, which gave me little help), TOYED (needed crossings), SEEIN (“let in” was my first instinct), and SOSO (again, the clue just didn’t get me there)

This puzzle ended up taking me longer than usual, which is odd since I started out with a strong flow and filled a good portion of it in quickly. I found the bottom half (acrosses and downs) a bit trickier for me. The first “t” tripped me up and I almost ATEIT but I was still able to complete it in a decent time for myself.

THEME: AL is added into a repeated word. Wackiness abounds. 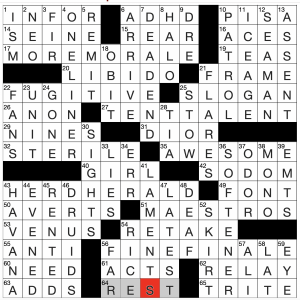 Pretty good! I like that the grid isn’t over-crowded with theme in this one. Plenty of breathing room for an open grid with some nice, longer fill.

I thought, based on the title, that I would be adding -AL to common phrases, but instead it’s a repeated word, which made it rather fun and interesting as the solver can infer a little more. That being said, the phrase MORE, MORE! is a standalone as a base phrase I think, so it was a little deceiving to uncover that one first for me since I still assumed the base “phrases” were in-language.

Thanks for this one, Keith! Look forward to more from you! 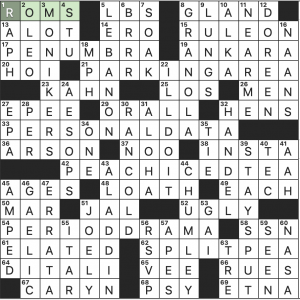 We have a little more obscure trivia than there has been recently. Back to the old Jonesin’! Also, the theme is making me hungry:

Well done. Do you want some split pea soup as well? It is starting to get a little cool here, so that doesn’t sound too bad! Great theme in that I didn’t see it coming, although I did notice they all started with a P. Even then there is still enough of an “a-ha!” moment to close out the solve smoothly. 4.4 stars from me today.

About that obscure stuff: 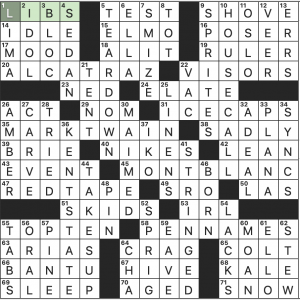 We have TWO new Daniels to add to the constructor database today! Congrats to the possible debut, and a nice theme to boot. See what you think:

As a pen buff, I found this a clever theme. ALCATRAZ is a “pen” as in a prison, Twain is literally a pen name, and MONT BLANC is a literal pen. One I cannot afford! And I have spent too much on pens, believe me! If this is in fact a debut, it is a fine one! 4.6 stars from me.