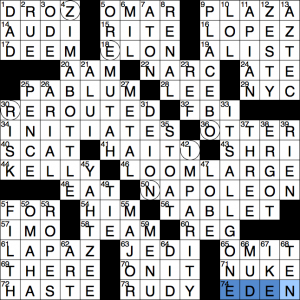 hello and welcome to episode #699 of matt gaffney’s weekly crossword contest, “Nothing Will Change”. for this week 4 puzzle (but aimed at week 3 difficulty) of TENTH MONTH, the instructions are: This week’s six-letter contest answer describes what you must often do to solve a meta. okay. what are the theme answers? there are no especially long answers in the grid, with a handful of 8/9/10-letter entries. but there is one clue that tells us about the theme, the last down entry: {Factor by which six clue numbers must increase} TEN. well, that’s certainly apt for tenth month. what does it mean? it means we should be looking at the clue numbers, and multiplying them by ten, and seeing if the result bears any relationship to the clue or the answer. and indeed, there are six clues for which the first word or words are closely associated with the clue number x10:

taking the first letters of these entries in numerical order (equivalently, top-to-bottom order in the grid) gives ZERO IN, which is an absolutely ? answer for this meta mechanism—you’re literally putting a zero in the clue number to multiply it by ten! damn, that’s good.

overall, this was a very satisfying meta—not too difficult, as the clue for TEN basically told you exactly what to look for. the six theme clues were a mixed bag; some were very tight and satisfying, but there was one real clunker (IMPARITY) and some other slight inelegances. the final answer is so satisfying, though, that the overwhelming impression in retrospect is positive, so i’ll give this 4.5 stars.