Hello! The Washington Post puzzle for this weekend is actually a two-page puzzle suite with a meta solution. Jim Q has devoted a separate post to the WaPo write-up. It can be found here.

Happy Halloween, everyone! I hope you all have wonderfully fun, spooky plans for the day… or that you’re at least looking forward to tomorrow’s discounted candy aisles like I am. :) 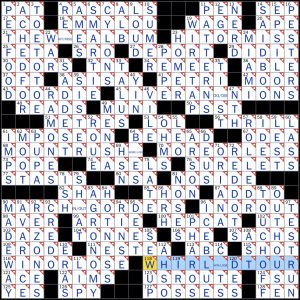 This puzzle was fun for me, though I’ll admit it took me a bit to figure out what was happening. How cool that there are five triads of entries per themer: one that is of the form of a common “A OR B” phrase and the other two that each use one of these choices in the same box, depending on if you’re looking at the across or down clue. It was a nice touch to have the OR phrase and the related across entry in the same row. Pretty ambitious! And, the constructor pulls it off well, I think.

What lovely theme density. I’ll admit that I’m sometimes hit or miss on this constructor’s puzzles, but count me as a big fan of this puzzle – both as a solver and as a constructor who doesn’t think he could have pulled this off as well. 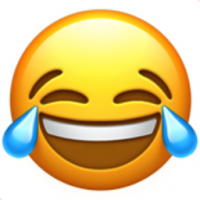 Random thoughts:
– I appreciate clues like [Living ___] WAGE that normalize/legitimize ideas (by the fact that they are “good enough” to be in a NYT puzzle) and help shift the Overton window on them.
– My students tell me that the Face with Tears of Joy emoji (in the clue for LOL at 53A) is only for “old people”… though I’ll admit that it’s my favorite and most used emoji. It is not, according to my students, the HOTNESS.
– Apparently, the Northern SPY apple might have been named after an abolitionist. Listen here for more!  (I was worried it’d been named after someone from the confederacy.)

That’s all from me for now – let me know in the comments sections what you thought about the puzzle. Happy Halloween!

I vant to solve zis puzzle!

THEME: VAMPIREs, and the things they fear. 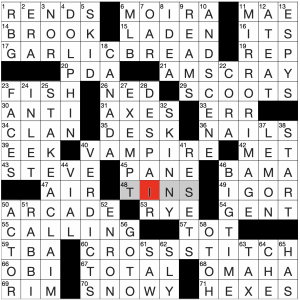 60A [What a 40-Across wouldn’t want from a tailor] CROSS STITCH.

25D [What a 40-Across wouldn’t do with an insurance agent] STAKE A CLAIM.

Well, I don’t think the CROSS STITCH or STAKing A CLAIM is gonna harm the vampire, so I can’t see why he wouldn’t want either of those. GARLIC BREAD might be an issue. Guess it depends on how heavy handed we are with the garlic. And… do MIRRORs harm vampires? Or is there simply nothing reflected back? I really don’t know much about vampires. There seems to be a different set of rules for each vampire in the various movie/book/TV series to which they belong.

I jest. This puzzle is fun and timely, of course. And there’s a bit of a crossover between this one and the WaPo Meta Puzzles(s) that I’m so close to finishing (that’s not a spoiler… go solve it!). Maybe this one will help push me in the right direction for the final step of the other.

Have a safe and happy Halloween!

Theme: Every theme answer includes an item that is the combination of an animal and a food. 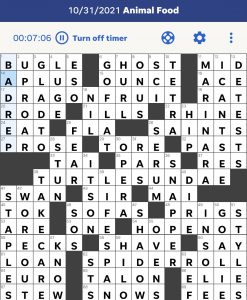 When I first saw the puzzle title, I wondered if we were going to get answers that worked in words like “kibble,” “fish feed,” etc., and this was much more fun. I have to imagine that there are a number of possibilities that could fit within this theme, but I thought that this was a nice collection. Something I often think about with themes is whether or not the clue plays a little more on the words themselves instead of the exact definition, as we saw in this puzzle. The former is more fun, but there’s less of that “aha!” when you figure it out. Getting DRAGON FRUIT was huge for me, though, since I wasn’t exactly sure what a SPIDER ROLL was and likewise don’t eat a lot of sundaes.

Some clues and answers to think about:

Anyway, this was a fun puzzle with a relatively smooth solve, save for a few hiccups here and there for me. Happy Halloween!

Theme: Familiar phrases are punnily applied to a coven of witches gathering for Halloween shenanigans. 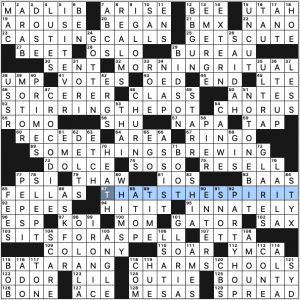 Cute. I love the consistent narrative as it progresses. I felt it fizzles at the end, though. I wish the last entry was stronger/funnier to finish with a bang, but it’s still cute.

I’m loving the fill, especially BATARANG and SORCERER which make good Halloween add-ons. Also good: CROCODILE (and GATOR), “IS IT EVER!,” NOT ONE BIT, PARTY HOP, WHIMSY, and GETS CUTE.

Hmm. ARISE and AROUSE in the same grid and very close to one another (7a and 19a)?

3.75 stars. Congrats to Garrett on the debut.