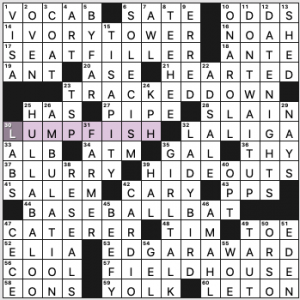 Straight to the rundown—

Fave fill: VOCAB, SEAT-FILLER, HEARTED (as in a Twitter or FB “react”), LUMPFISH (I don’t know this fish but its name is as charming as the blobfish’s), LA LIGA, EDGAR AWARD, HULLABALOO, the movie (which I’ve not had an interest in seeing) LADY BIRD, GIRL TALK, “DON’T WAIT UP,” and DATE NIGHTS.

Three more things before I turn to the Great British Bake Off:

Four stars from me. Onward into the weekend!

THEME: Common phrases that have ab workouts in them, clued as if part of a curriculum and Joe Six-Pack is the teacher. 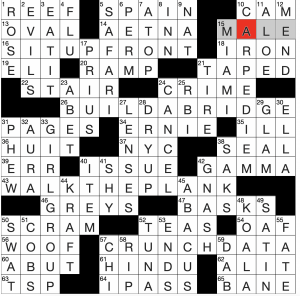 I don’t know what school this is, but rest assured Joe Six-Pack ain’t teaching at my high school where I teach. It’s Dad Bod all around (congrats on your official “new-word” status, Dad Bod!)

Fun idea! The cluing took an otherwise common theme to a unique level. At times, it reminded me of Evan Birnholz’s recurring character Captain Obvious.

I assume a BRIDGE is a core exercise? Any fitness gurus out there cringing that I have no clue? The other ones are pretty easy… SIT UP, PLANK, and CRUNCH. Regarding that last one, I dunno if I’ve heard the phrase CRUNCH DATA. I know it as CRUNCH NUMBERS.

Enjoyed this collab. Nothing much else to say! 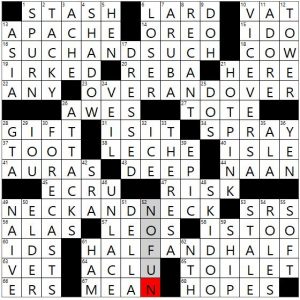 Little bit of deja vu working through the themers from Nate Cardin. The title is “Double Time”, and we’ve got repetition:

Four in-the-language phrases, and you can’t say it’s not a consistent set. VICE VERSA (10d- The other way around) and DOS (25d- Uno mas uno) are not part of the theme, but they felt like fun easter eggs to me.

With a theme like this, it can be easier for the solver to breeze through chunks of the puzzle, but I loved a ton of the fill in here. On to the notes: 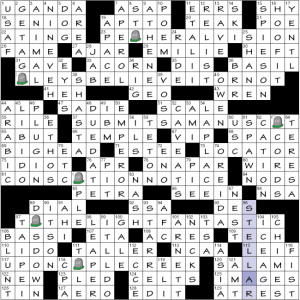 Rebus time on this eve-of eve day. The final across entry isn’t an explicit revealer, but it more or less functions as one, and also as a metacommentary on the crossword: 129a [In the graveyard] AT REST. Requiescat in pace, or ‘rest in peace’, commonly abbreviated as RIP and seen on tombstones, appears in both the theme answers and where they cross.

Cute and timely Halloween theme. There’s a bit of false promise at the outset, with the two clues invoking the holiday, but it’d be unfeasible to sustain. Nevertheless, well done.

Time to go from door-to-door. 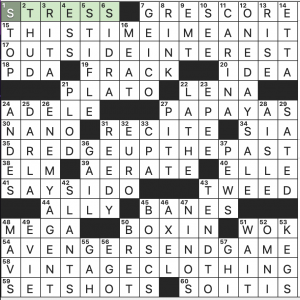 Look at all of those 15-letter entries in this grid! They all seem to be extremely lively. I will highlight most every one in the commentary below, but this was a fun puzzle. It seemed to put up a slight bit of resistance, but I was not racing like I should be doing. One of these days I will submit my OWN themeless to the LAT! Perhaps this winter I will have time to make one, but in the meantime, nice puzzle, Adrian! 4.4 stars from me.

I could go on, but I will stop there! Michigan has a big game today, so I have to go! Enjoy some Adele! 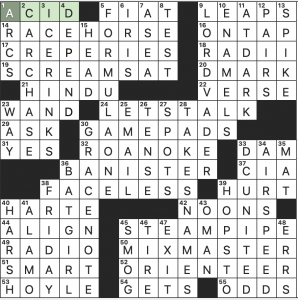 Got through this one without too many scars. I found the NW corner almost impossible to get a toehold in. The lower half was finished first; I need to start solving down there going forward! One of the live Boswords solvers mentioned that he always started the themeless puzzles in the SW corner. I need to try that! But nice puzzle today. I am keeping this short, as Michigan has a big game at noon today! 4.5 stars.