Theme: The last word in each theme answer is the name of an NFL team. 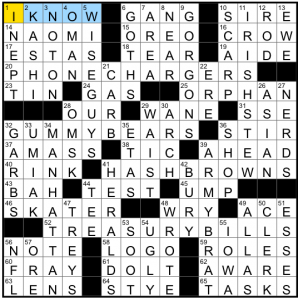 Congrats to Fiona on her NYT debut! In a fun coincidence, I turned on the Seattle football game immediately before solving this puzzle (and am now only a little annoyed that Fiona didn’t find a way to work in “Seahawks”). As an NFL fan, I was able to figure out the theme mid-solve, although knowing the ends of the phrases were teams didn’t stop me from putting in “treasury bonds” over TREASURY BILLS  for some reason. The revealer will help out folks who don’t follow sports, and the theme phrases that Fiona picked out (particularly the first three) are all fun and evocative.

I have mixed feelings on the fill today. I really like MANHATTAN and WISE GUYS, but KASHI, UMIAK, and SCARP are rough on a Monday. There were also several common words that I felt were made much trickier by their clues – In particular, I was held up on 26d [Like Russia, east of the Urals] for ASIAN and 42d [Hide in a hard-to-find spot] for BURY. Also, I keep parsing ALL A’S as a misspelling of “alas”. Overall, I felt like I was moving very slowly through the puzzle, but I ended up with an average time – I’m curious about how other people perceived this puzzle’s difficulty. 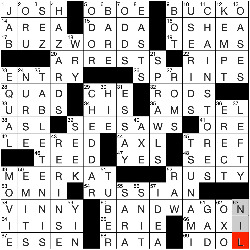 Today’s puzzle is pretty sharp. No, really. Go to the revealer in the center at 39A [Vacillates … or what you can do when you look at the starts of the answers to starred clues?] and you get SEESAWS. Not just a playground implement (of yore, anyway; seesaws appear to be a casualty of making playgrounds less lawsuit-inducing), if you split the word into two you get SEE SAWS, because the first portion of each theme entry is a word that works in combination with SAW.

I have a couple of nits to pick with the cluing. For example, 23D EQUAL is clued as [Math sign], but isn’t the sign an EQUALS SIGN, not an EQUAL? Also, other pubs have been doing better about not being heteronormative when cluing gendered entries — 15A [Mama’s mate] for DADA could have used a “perhaps.”

I hope I’m not the only one who was stumped by the theme until well after finishing. It took a minute or two to see the beginnings of the theme answers are steps in the laundry process. 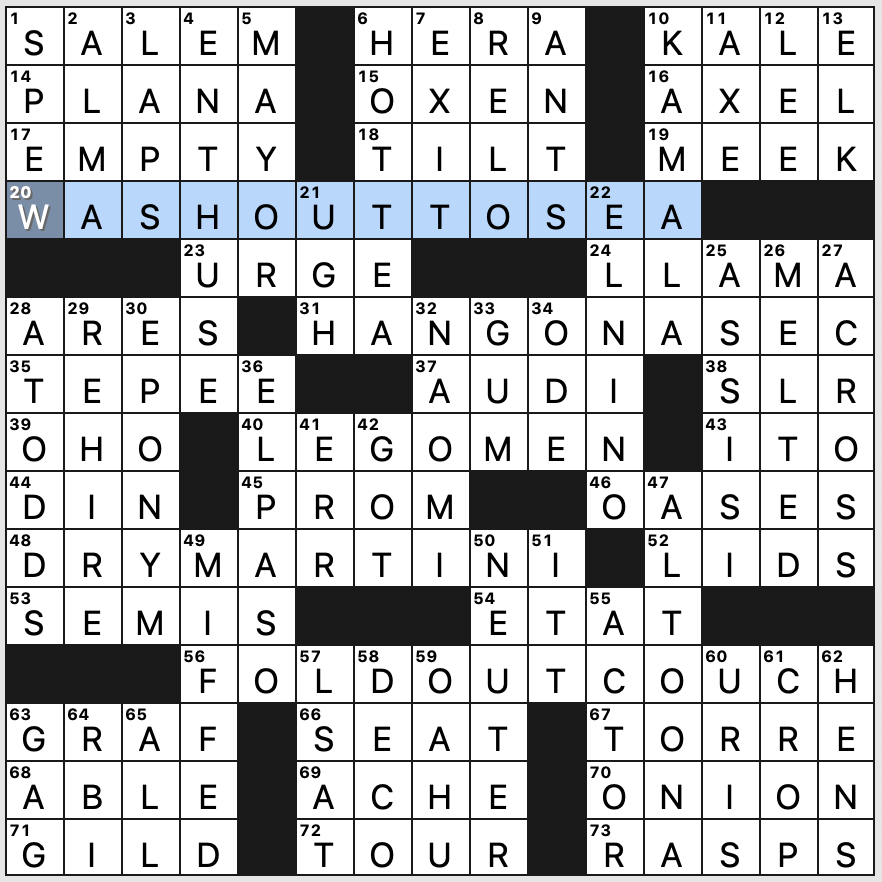 A couple things conspired to confuse me. 1) The title. I was not aware that there was a day of the week when it’s commonly accepted that most people do laundry. For us, it’s always been a weekend chore when we’re done using uniforms/work clothes for the week. I really have trouble believing that most people do laundry on Mondays. Why not just title the puzzle, “Laundry Day”? 2) LEGO MEN looks like it might be a theme answer, based on its length and central placement, but it’s a red herring. (Also, I’ve never heard that term despite being around LEGO all my life. The actual term is minifigure or minifig.)

Not everyone hangs their clothes out to dry. Further, since that’s part of the drying process, I’m thinking it shouldn’t really be there. Most people do sort their clothes prior to washing (I think), so starting the theme off with SORT makes more sense to me (if a suitable phrase exists, that is).

Moving on, I see there are no long non-theme entries (nothing longer than 7, anyway). The aforementioned LEGO MEN is the most interesting bit of fill, but again, nobody uses that term as far as I know. ALTOONA, KAMALA, EL PASO, AT ODDS, HOT TEA are nice mid-length entries.

The title really confused me on this one. 3.25 stars. 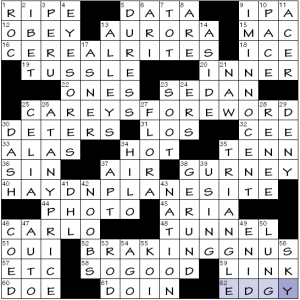 Looks like … multiple homophones? That are phrases in the original versions? Not seeing anything that unites them further.

I mean, these are pretty fun I guess, and maybe that’s all that’s necessary for an early week offering.

Quick tour, as I have an appointment this morning: 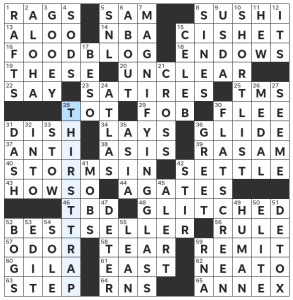 Good morning everyone, I hope you’re all recovering from Halloweekend with water, sleep, and 50% off candy from your local CVS.

Title: Three Doors Down
Theme: The last word of each theme answer, which is positioned vertically in the grid, can come before the word door
Theme answers:

This puzzle is asymmetrical, which I did not even notice until I was reviewing the grid and finding the theme answers to list above. Some fun bonus answers in FOOD BLOG, STORMS IN, and BEST SELLER. More things below: 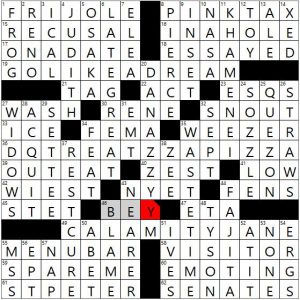 Today’s puzzle from BEQ felt tougher than my time ended up, but it wasn’t a breeze either.

The three long acrosses range from the familiar: CALAMITY JANE (49a- Buffalo Bill’s Wild West show star), to the ‘yea, I guess I’ve heard of it: DQ TREATZZA PIZZA (36a- Frozen pie-shaped dessert from a soft-serve chain), to the old crossword standby of ‘a phrase that’s close to one I know but not quite’: GO LIKE A DREAM (19a- Work better than expected). I never use or hear “go”, but do use “work like a dream.”

All those Z’s, complete with (38d- One of six in this puzzle’s grid) calling them out had the feeling of a stunt puzzle, until I got to the central down answer, DANA ZZYYM (20d- First person to have “Gender X” on their passport).

Zzyym was born intersex and received their passport this week after a six-year legal contest with the State Department. I had seen their name previously, but I’ll certainly know it better now, and I’m glad BEQ could make it work in a grid. I will note that Zzyym is the first person to have “Gender X” on an American passport; a number of other countries already offered the option. I highly encourage you to click through and read this link. 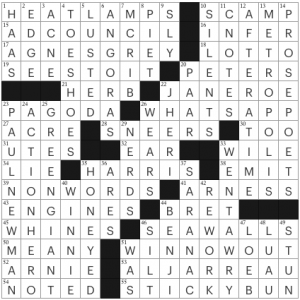 Getting to this late, so I’ll be quick. Fave fill: JANE ROE (subject of a recent New Yorker story), WHATSAPP (I use it to chat with my South African Pokémon Go friends), NON-WORDS, WINNOW OUT, STICKY BUN (terrific clue: [One with a glazed look]), PAUL NEWMAN, ACTION HERO (if you like action movies, you might enjoy this year’s The Suicide Squad starring Margot Robbie), GREEN GIANT, PROSE POETS.