Happy Halloween, everyone! Mike gave us a spooky Halloween contest full of chills and thrills this week, where we’re looking for a Halloween costume choice. This puzzle proved to be one of the most challenging WSJ puzzles in recent memory. 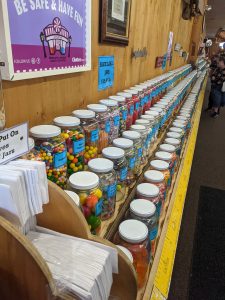 I was hoping this photo I took at Chutters in Littleton, NH (home of the world’s longest candy counter) would be meta-relevant, but it’s not

There were no obvious themers, and Mike ruled out 49a (KIELBASAS, clued as “Polish sausages (which play no part in solving the contest)”). I set a world record for dead rabbit holes on this one, here’s a sampling:

I got lost in a warren of spooky rabbit holes, so I teamed up with some solving pals for an old fashioned group solve. My most promising theory proved to be correct: ambiguously-clued entries with alternate potential answers are a classic meta mechanism, and we had plenty here. There were many clues that had alternate answers that rhymed with TRICK or TREAT:

I also had the weaker potential themers FRAUDSTER/CHEAT, HAIL/SLEET, GETS/CLICKS, and ORE/TEETH in my notes (which lead to even more rabbit holes that added a lot of solving time to the clock). The theme entries were mostly symmetric, with obvious omissions. I spent a while on the missing symmetry, especially 27a (HILDA, clued as “Sabrina the Teenage Witch” aunt), which was symmetric with NOICE. Sabrina had two aunts, so that Halloween-themed clue had two equally valid answers (ZELDA was Sabrina’s other aunt).

I kept trying to spell words with the TRICK and/or TREAT rhymes. I reasoned that Mike would prefer to give us a TREAT instead of a TRICK, so I focused on TREATs. I noticed that there weren’t enough vowels to spell a word, but I had (unfortunately) missed ODIST/KEATS until a solving buddy pointed it out. 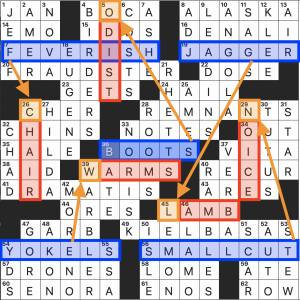 We had all of the ingredients, but were still missing the signal for step 2. My friend Austin focused on ICK/EAT rhyming themers (SICK or SEAT, MICK or MEAT), and we had it. Here they are in TRICK-rhyming grid order:

There are five rhyming pairs that start with the same letter, and the first letter of the grid entry for the TREAT rhymes spells our contest solution CLOWN.

This was an impressive tough meta by Mike. All of the potential ambiguity was resolved by the matched TRICK/TREAT rhymes, ending with a 100% click. We’ll end with my favorite clown-themed song: Rodeo Clowns, written by Jack Johnson, but made famous (to Gen-Xers of a certain age, anyway) by G. Love and Special Sauce.