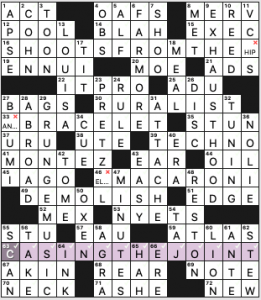 Migraine-shortened write-up today. Revealer is CASING THE JOINT, 63a. [Staking out a potential robbery site … and a hint to this puzzle’s theme]. The HIP, ANKLE, and ELBOW joints are “cased” in rebus squares. We get SHOOTS FROM THE {HIP} / V-C{HIP}S, {ANKLE} BRACELET / B{ANK LE}UMI, and {ELBOW} MACARONI / PRETZ{EL BOW}L. I have no idea what a PRETZEL BOWL is, and had to dredge BANK LEUMI out of the recesses of memory with the aid of the crossings. Would prefer more familiar rebus entries—R{ANKLE}D, say.

Did not know Maria MONTEZ; she was Dominican and died young in 1951. RURALIST is uncommon, APSE is dull, plural NYETS is questionable. Did like GRUNGE MUSIC lots. Cute to clue TOON as [Bender, e.g.] given the title (Bender is the robot in Futurama).

Theme: Groups of circled squares bent at right angles spell out synonyms of “big.” The revealer is BIG BEND (36a, [National park along the Rio Grande, represented by this puzzle’s circled words]). 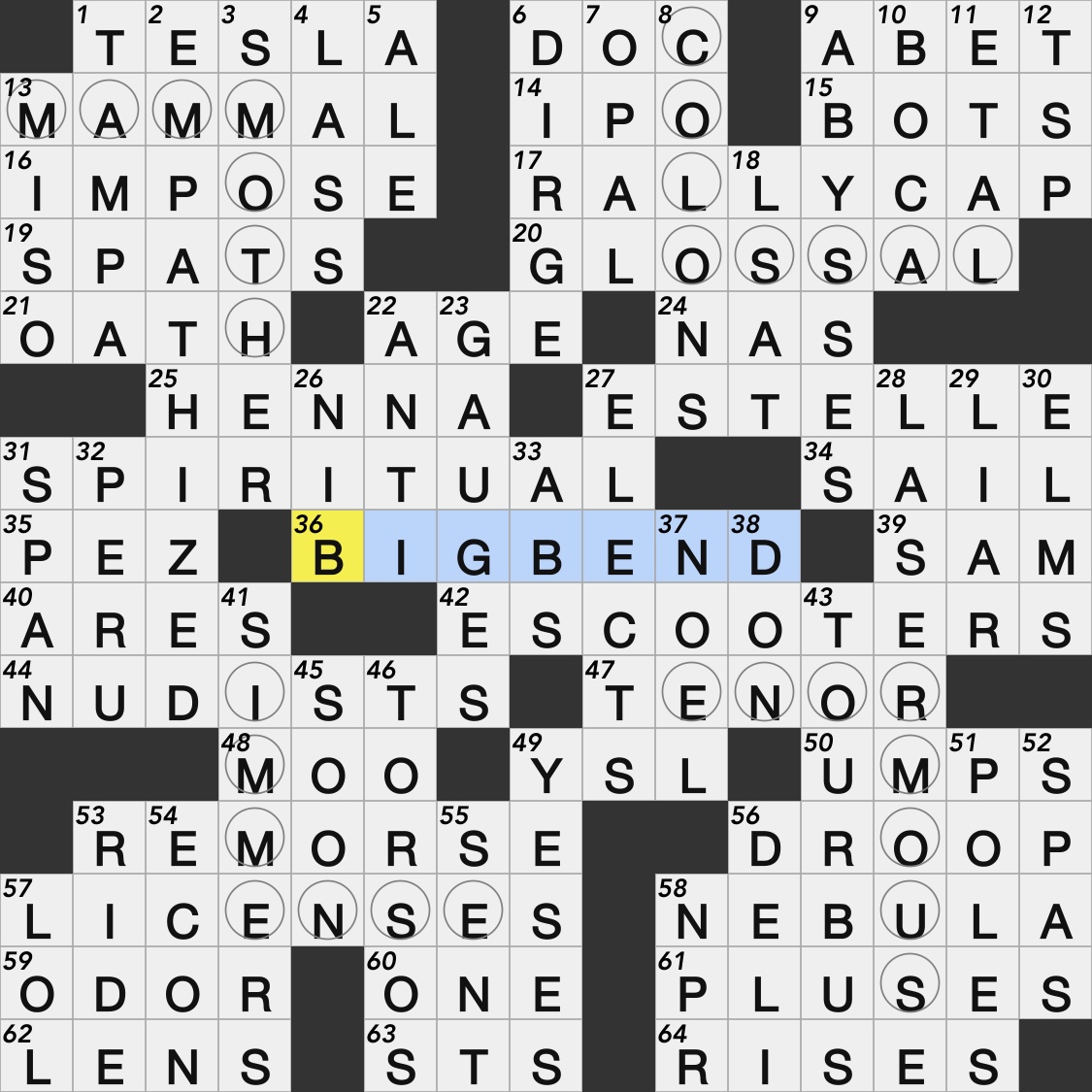 I caught on to this pretty quickly since the cluing seemed unusually straightforward for a Thursday. And when I uncovered the revealer, I was not surprised since I happen to know Evan has a particular interest in National Parks and because I lived in Texas for a time (though I never made it west to BIG BEND. Still, I enjoyed the construction and uncovering each entry, especially the final one, LASER MOUSE.

As usual, Evan fills the grid with strong entries like RALLY CAP, TOUR BUS, SPIRITUAL, NUDISTS, and ESTELLE Costanza. E-SCOOTERS was a surprise, but I don’t have a problem with it if that’s what they’re popularly called, which it seems they are. Nothing else made me pause very long and I had a smooth solve from start to finish. 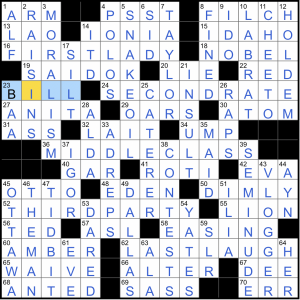 I spent FAR too long trying to figure out some sort of weird rebus thing going on with the theme clues of today’s puzzle:

It’s not a rebus, though, just some indicators as to which LADY, RATE, CLASS, PARTY, and LAUGH is selected in each of the clues, leading to the final phrases.  It’s actually kind of clever.

TAYLOR Swift also has a song called “THE MAN“, but I like this one better.

other nice pieces of fill: cafe au LAIT, ROTI (instead of NAAN like I expected – as long as we’re adding more types of Indian bread to the crossword, can I request POORI next?), MORALISM, SNAKE OIL, and SEMI-NUDE.

THEME: Phrases that are literally represented when a word in the phrase is both forward and backward. 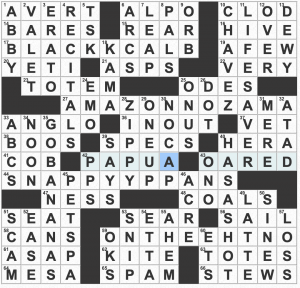 I’m a sucker for the “literally” themes. It’s these types of themes that got me hooked on crosswords to begin with, and I think Universal is a perfect venue to be publishing one like this, which is easily grokked but is likely to give new solvers a solid AHA moment.

The two nits I have with the theme, noted above, do not detract from a great solve experience here.

NO CAP and my inability to master the spelling of PAPAU New Guinea (no matter how often I see it) was a source of struggle for me. (Update: Someone just texted me to note that I still spelled it wrong. PAPUA. Arghhhh!) I hear “NO CAP!” said a lot in school (at least I did two years ago… I think it’s going the way of “Lit!” and phasing out), but I’ve never heard of Lil Tjay.

Theme: Each theme answer is a type of promise 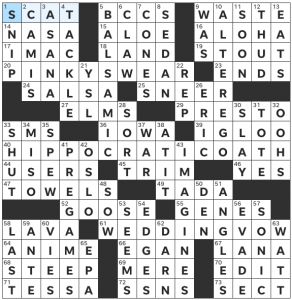 Stellar theme set from Enrique today – I like all of these answers, and HIPPOCRATIC OATH is a great grid-spanner. Every answer was exactly what I expected it to be when I read the clue, which in my opinion is a good thing because it means all the theme answers are real things that easily come to mind (and it also meant my time was super fast, so I won’t complain). Each type of promise uses a different word to mean “promise” too; that’s a nice touch.

The fill is great today too – there aren’t too many proper nouns, which should even out the difficulty levels since different people have different pop-culture knowledge.

Favorite clues: 31d [Piece of swag that might carry more swag] for TOTE, 57d [Fictional hedgehog with a “spin dash” move] for SONIC

Things I didn’t know: that NASA‘s headquarters is named after Mary W. Jackson, or that TESSA Thompson was in “Sylvie’s Love” (I do, however, know that she is in “Passing”, which is out on Netflix now and is very good). 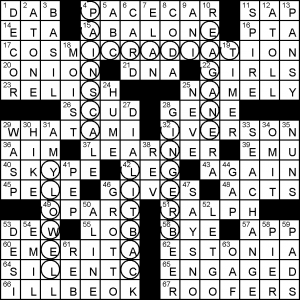 My first impression of today’s puzzle by August Miller was “boy that’s a lot of circles”. It also has left-right symmetry, so there must be something interesting going on. To be honest, except for pausing to note SEACHANGE was the revealer, I didn’t really register the theme. I turnso out this quite ambitious arrangement has “___ Sea” seas scrambled in SIX places: ADRIATIC is hidden across, and then from left to right going down, we have Yellow, Caspian, Baltic, Bering and Aegean.

Even without noticing the theme, I was having a grand old time with this puzzle. There are a number of playful answers, as well as more prosaic ones that are elevated by playfulness in the clues.

This was definitely a buckle-your-seatbelt-sharpen-your-pencil moment for me crossword-wise. BEQ warns in his constructor notes that this was a “Going Too Far” puzzle, meaning that first or last letters of many of the answers will overlap into the grey squares. For example, the first Across answer to overlap is 5a [“Old Testament prophet”] ISAIAH, the I of which is in the grey square immediately to the left of the rest of where 5a begins. I’ve noted the overlap in red on the solution here. 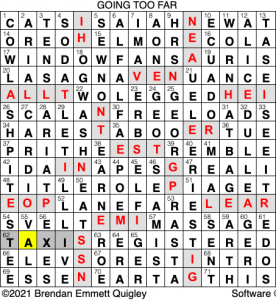 Ultimately, this spells out a quote from Nietzsche, which was “In heaven, all the interesting people are missing.”

Where I struggled – aside from this being one of my first puzzles like this – was with the amount of names included in the puzzle, ranging from 19a [“‘Trinity’ novelist Leon”] URIS to 47a [“‘Around the Horn’ host Tony”] REALI to the Jeans PIAGET and AUEL, among others. I also struggled with 24d [“59-Down prefix”] GEO and 25d [“Conductor Solti”] GEORG in which GEO was doubled right next to one another, which I found to be odd, though I’m curious what y’all think.

The highlights of this puzzle include:

12d [“___ in Borderland”] – ALICE in Borderland is a 2020 Netflix show about two characters in a violent game in Tokyo where they have to play games to survive. It’s based off of a manga of the same name, and you can check out the trailer here.

18d [“Nonsensical poppycock”] – I said “HOGWASH!” out loud when I figured this one out, confusing the heck out of my friend sitting across the table from me.

Overall, I definitely had a rough time adjusting to the style of this puzzle, but I’m definitely a better solver for having done so, which I count as a win.