Theme: Today we have phrases containing a word that ends in -ON. That word is “broken” into two words before the ON, thus ensuring crossword wackiness. 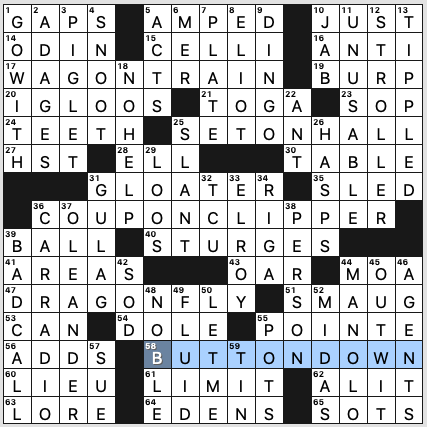 I enjoyed the wordplay here, but the cluing felt a bit tortured at times.

Fairly wide open corners in this grid, no doubt due to the 13-letter central entry. For the most part they’re quite smooth; I especially like the BAD CALL / CAR RADIO stack in the SW. The only sticking point might be that MANOLO / MOA crossing in the SE. And maybe not everyone knows SMAUG (though that sounds like crazy talk to me). 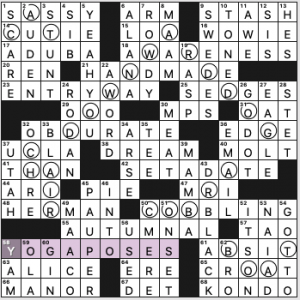 Tonight I learned that I really don’t know very much about yoga. The theme answers are five YOGA POSES  (58a. [What the five formations of circled letters in this puzzle represent]) illustrated by the circled letters. With the diagonal and bending poses snaking through the grid, each of those circled letters appears in Across, Down, and circled answers, so that’s three-pronged checking instead of the usual double-checked letters.

We have CAT in the northwest corner of the grid. Uh, this is the same shape as the DOWNWARD DOG, just smaller. Wikipedia shows me a CAT pose that is not at all an inverted “V” shape; perplexing. I did not know there was a CHAIR pose in yoga. COBRA is familiar, but I feel like the head of COBRA is the C, not the A, and would have liked the head to stretch upwards. Last, there’s a BOAT pose, but that OA makes for a wide, flat butt, doesn’t it? Rather than a V-shape? Didn’t know there was a pose called the boat.

Interesting theme idea, but the triple-checking brought about some compromises in the fill (the worst offender is 61a. [___ omen (Latin akin to “Heaven forbid”)], ABSIT?!)

Theme: Each theme answer is surrounded by the letters MOLD: 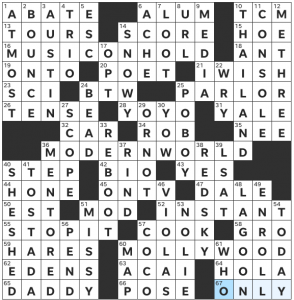 Classic USA Today theme type today executed very well. I appreciate that the M O L D is split up differently in each of the three answers. Is MUSIC ON HOLD a thing? I really wanted that answer to just be “hold music”. I didn’t know MOLLYWOOD but it fits a well-known word pattern and was easy enough to puzzle out, and it’s a fun answer besides.

So much colorful fill in the puzzle – ME THREE is definitely my favorite, followed by SHE SHED and TOSTADA. I didn’t know BOUNCE as 2d[Big Easy music], my first thought there was “zydeco”. Fun that POBOY is also in the puzzle for double Big Easy. Other answers I got entire from crosses include 62a [“___ Zero” (manga)] for EDENS and 65a [“___, Papa, and Me” (children’s book)] for DADDY – man, it’s a good thing the downs in the SW were gettable for me!

I’m really curious about the black square pattern here. One reason I think asymmetric grids can be great is when they allow for theme sets with answers of different lengths. But today, this theme set could be placed symmetrically in the grid – MUSIC ON HOLD and MODERN WORLD both have 11 letters, and MOLLYWOOD could go in the center. Another reason for asymmetry is to put in a particular extra answer as bonus content, but (with apologies to SHE SHED), there aren’t any long standout answers. And a third reason for asymmetry is if the grid is particularly difficult to fill, but given there are only three theme answers here, I doubt that is the case. So I’d be interested to know why this pattern was chosen, even if that reason was  “because the constructor felt like making a asymmetric puzzle”! USA Today continues to break the mold (haha) when it comes to crossword conventions, and I’m here for it. 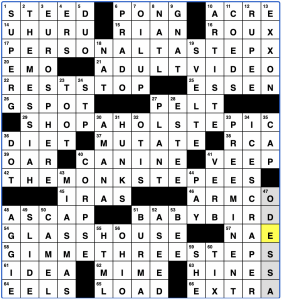 Byron Walden and I aren’t often on the same wavelength, which makes his AVCX puzzles challenging.  This week’s was no exception:

I was trying to figure out something far more complicated going on with the theme answers than just your standard “add a word to some phrases to make new phrases” theme, but with step.  The phrases in question here are PERSONAL TAX, SHOPAHOLIC, and THE MONKEES 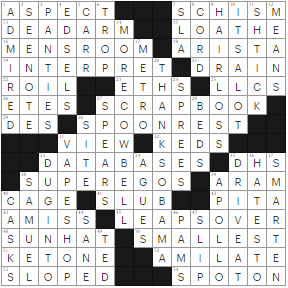 What a pretty grid from Anna today! Four corners, a stairstack (vertically too), and only four three-letter entries.

Oh, and the fill is clean as hell – a couple of iffy plurals (ETES, PAMS, LLCS) are well worth highlights like MORE COWBELL (14d- “S.N.L.” catchphrase for Christopher Walken) and THANKS OBAMA (20d- Meme in which life’s inconveniences are blamed on the forty-fourth President). I liked the parallelism of “Certain archives” for SCRAPBOOKS and DATABASES. 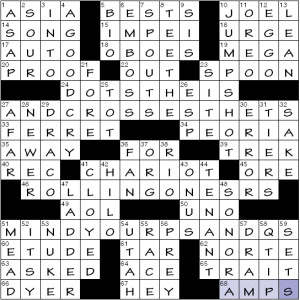 Not quite sure what makes the theme answers coherent.

Certainly they’re all idioms involving specifics of letters, but only the first (paired entry) is explicitly about writing. The second references speech, and the third derives from moveable type.

Perhaps the ‘writing’ invoked by the puzzle’s title refers to the solver’s act of filling in the grid, I don’t know. In any case, I like all of these theme entries individually. 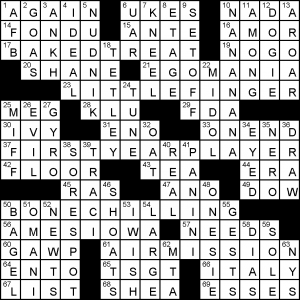 Today’s puzzle by Paul Coulter is one where my instinct of “if the theme makes no sense, solve around it” slowed me down. The puzzle’s conceit of [>word<, i.e.] actually being [—ie] falls kind of flat when you realise the initial version is meaningless. I.e. is invariably followed by something… Now if the puzzle had used “e.g.” it’s premise would make a lot more sense. In short the theme is BAKEDTREAT, [Cookie]; LITTLEFINGER, [Pinkie]; FIRSTYEARPLAYER, [Rookie]; BONECHILLING, [Eerie]; and AIRMISSION, [Sortie].