Theme: B-TO-B (57d, [Like intercompany trade, for short, and a hint to the starred answers]). Theme answers are phrases that start and end with Bs. 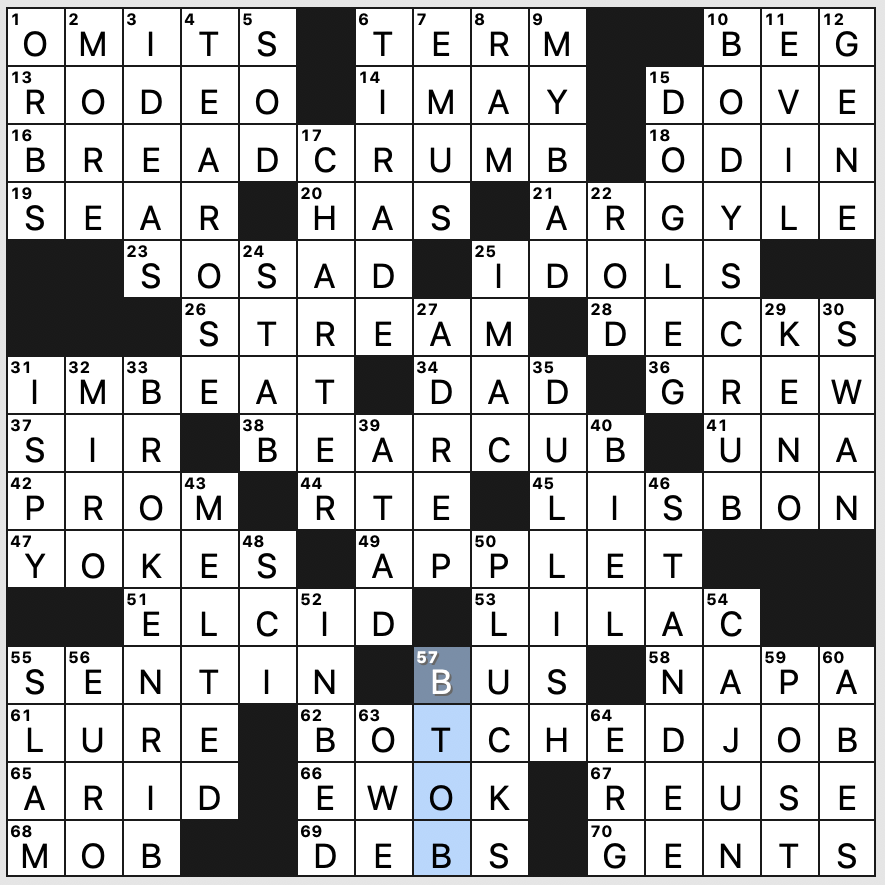 Clean and breezy. However, there have to be many additional phrases that are potential entries here (book club, biology lab, back rub, brew pub, Bausch and Lomb, etc.). I wonder if it would make sense to try to include another constraint. I’m guessing it wouldn’t. The revealer is simple and straightforward, making it just right for a Monday puzzle.

I’ll admit to having trouble trying to make sense of the title, though. My best interpretation goes like this: Take the letter B (the second letter of the alphabet), split it into two Bs, then fill in the gap with other letters to get the theme answers. Sounds a bit dodgy, but it’s the best I could come up with. Help me out if you have other ideas.

With theme answers in a pinwheel pattern, there isn’t much room for flashy long fill. But the mid-length fill is strong, as one would expect from a pro constructor like ZB: TEA ROSE, DOGLEG, ARGYLE, “MY BAD,” “SO SAD,” LISBON, “I’M BEAT,” CAJUN. I like DULLISH, too. It feels…less dull.

Theme: The first word of each theme answer is a GENRE of book 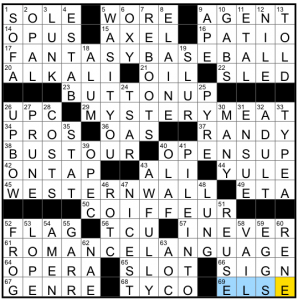 If you’re familiar with puzzles by my fellow Fiend blogger Stella, you’re probably also shocked to see her byline on a Monday (she has her own site full of super-tough themelesses; check it out here). What’s not surprising, however, is that today’s puzzle is excellent in both theme and fill. All of the theme answers are great phrases (MYSTERY MEAT is the highlight for me), although I did get tripped up by entering “fantasy football” rather than FANTASY BASEBALL. Maybe if this puzzle ran in the spring it would have been more top of mind. It is interesting to me that the 17a clue gives no indication of sport, did other people make this same mistake? It’s also interesting that the GENRE clue specifically calls out books when I think these could also genres of other media as well. Each answer effectively hides the genre meaning of its word, enough so that I had to complete the revealer to understand the theme, which led to a fun aha moment that I don’t always get on Mondays.

The fill today is AWFULLY good as well. I really like BUTTON UP and WAS IT YOU (and it’s fun that it crosses MYSTERY). COIFFEUR is a neat word too, although I have absolutely no idea how to spell it. Also, I went to Carleton College, which is in the same town as St. OLAF. Minnesota represent!

I will note, though, that there are a few abbreviations in this puzzle that are a little tricky – , I could see OAS or TCU being trouble spots, and UPC was new to me and felt especially hard due to the UPBOW crossing, I personally had ??BOW for a bit and couldn’t get the answer; thank goodness for PROS coming through. Oh, and I feel like I see “Est.” or “Estd.” much more than ESTAB, so that answer felt pretty weak to me. But overall, today was a solid Monday with an above average theme. 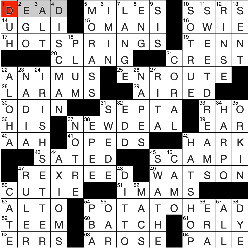 I think I spent longer figuring out the theme on the back end than I actually spent solving this puzzle. The revealer at 54A [Toy that can be either Mr. or Mrs. … and what the first part of the answers to starred clues can literally be] gives us POTATO HEAD. Whew, that’s a mouthful of a revealer clue! What it means is that the first word in each theme entry can be placed before the word POTATO to form a new phrase:

I feel like my 1:51 time belies the difficulty of the rest of the puzzle. For example, SEPTA felt like a tough entry to me; both Jessica LANGE and Jessica TANDY have won Oscars and are of the letter patter ?AN??, which meant I filled in TANDY incorrectly at first for [Oscar winner Jessica]; similarly, [Pest control biggie] at 35D led me at first to ORTHO instead of the correct ORKIN. Would’ve liked to see fully unambiguous cluing at both of those locations on a Monday.

Paul Coulter’s Universal crossword, “Where Am I?” — pannonica’s write-up 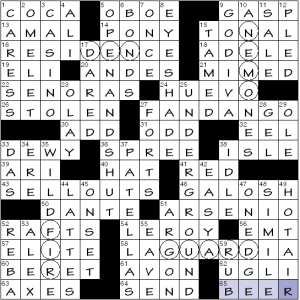 I love the conceit of the theme, but have some issues with the execution. One of the hidden words—NEMO—is a specific named individual while the other three are generic. And another is a direct cognate with its containing word: LA GUARDIA means “the guard” in Italian. So, fully half of these are acutely problematic, which shows just how difficult it is to come up with a strong theme that’s workable.

The remainder of the fill is with few exceptions very matter-of-fact, for a rote solving experience typical of early-week crosswords. The longer downs are nice fill: OPEN-AND-SHUT, UNDERGROUND, EYESHADE, and PATELLAS.

In retrospect, I perceive that the significance of the title is that the answer to “Where am I” is here, contained in where.

Theme: The theme answers are running vertically in the grid, hiding the word SAD– so the word is “sinking” in each term. 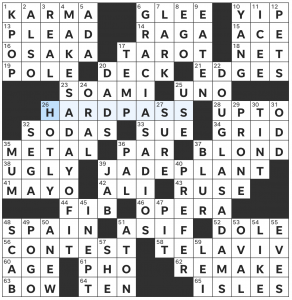 Such a clever title in this puzzle! It took me a second to realize that the grid was asymmetrical, although I feel like it should have been obvious with just the one Utah shape. Three three-letter words stacked together in a single corner (like the NE) can sometimes feel stodgy, but ensuring that all of the entries are words (rather than abbreviations or initialisms) helps. More notes below: 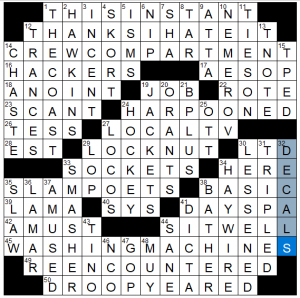 My highlights today include THANKS I HATE IT (12a- “What a unappealing post!”) and especially the answer/clue combos for HARPOONED (24a- Stuck on the ocean), WASHING MACHINES (45a- Spinning equipment), and LOCAL TV (27a- Downtown station?).

Not much in the way of out and out lowlights, though I didn’t like OTT or LOCOS, and INCENT and THE COAST felt like compromises. 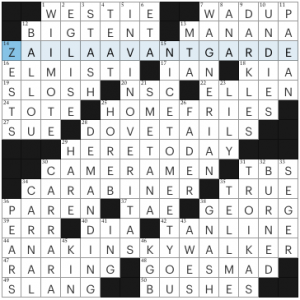 Okay, so Natan and his editors may have miscalibrated the difficulty level, because I expect a Monday New Yorker puzzle to hit in the 5:00–6:30 range, and this took me 10:48 to solve, including highlighting my wrong squares so I could piece things together correctly. I suspect the tough clues for a number of answers crossing spelling bee champ ZAILA AVANT-GARDE‘s name account for most of the low ratings for this puzzle, particularly the unusual Joycean word DARKLES, clued [“It ___, (tinct, tint) all this our funnaminal world”: “Finnegans Wake”]. I tried DANKLES first, though I guess DARKLES connects to the tinct/tint bit a little. [Mulled-wine ingredients] are ZESTS, but I tried LAILA for the speller’s first name (giving me LESTS) and later had to run the alphabet to find something you might put in mulled wine. I also flailed on [Like the classic Bugs Bunny cartoon “What’s Opera, Doc?”], trying WARNERIAN (Warner Bros!) instead of WAGNERIAN. With easier clues on ZESTS and WAGNERIAN and a definitional clue for DARKLES with “gloomy” in it to point the way, this would have been a lot easier for those of us who neglected to make a mental note of the Scripps winner’s name.

If wrestling with the name ZAILA AVANT-GARDE made you cranky, please read this new article about her. She sounds absolutely delightful! (And brilliant, and physically gifted, and curious.) Also, her dad’s last name is Spacetime.

Gorgeous grid with that center stack of five 9s, and it’s a mere 64-worder so not easy to construct. Fave fill: a BIG TENT, HOME FRIES, DOVETAILS, ANAKIN SKYWALKER, IN VINO VERITAS, NICE TO MEET YOU.

Top five clues, and it’s hard to narrow it down to five because there were so many tricky and interesting clues here:

This puzzle kicked my ass and I liked it. 4.5 stars from me, along with a wish that the crossings for ZAILA AVANT-GARDE would have been more pliable.