I’m always excited to see Adam Wagner’s byline and this puzzle brought the joy I imagined it would. He somehow managed to find six sets of movies where the letters of one movie title could be found – in order! – inside a longer movie title, both movies staring the same actor(s). There are some pretty cool finds here, and I wonder which one was the seed for this idea. Maybe LION hiding directly (and not even spaced out) inside SLUMDOG MILLIONAIRE? 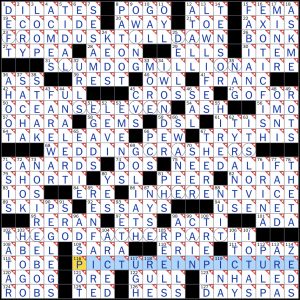 There are a lot of cool finds in these theme entries and I really appreciated having the revealer as a bonus moment to smile (though in my test solving, I questioned the use of the word “Modern” in the clue for PICTURE IN PICTURE since that ability has been around in some form for decades).  The title, “Screen Sharing” and the revealer are both such great tie-ins to the film-in-film theme.  I’m not always the most keen on trivia themes in puzzles (I tend to prefer wordplay themes), but I can imagine a lot of people will really dig the idea here!  It certainly makes for plunking in themers more quickly. 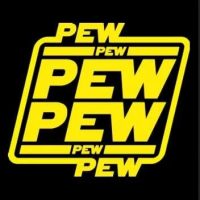 Other random thoughts:
– 64A: [Utilize a company policy for new parents, say] TAKE LEAVE – I appreciated that this clue wasn’t gendered / didn’t assume maternal leave.  Also, wouldn’t it be great if parents could TAKE LEAVE for meaningful amounts of time like they can most everywhere else in the world?!
– 66A: [When tripled, playful onomatopoeia for shooting laser beams] PEW – How could anyone fill this in and not immediately say it outloud or in their head?  So joyful!
– 6D: [Ending with “brown.” or “auburn.”] EDU – I liked the play with colors here.
– 62D: [“Clever ___ are never punished”: Voltaire] TYRANTS – This clue / quotation depressed me, for presumably obvious reasons.

What did you enjoy about this puzzle? And can you think of other film-in-film examples that would have fit this theme? Let me know in the chat. Until then, be well and, for those who celebrate it, have a happy Thanksgiving!

Theme: Every theme answer includes the word “tent,” meaning that the title literally means that “tent” is in each phrase. 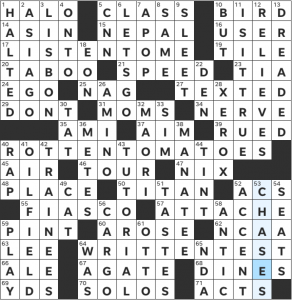 I’m definitely the type of person where if you use the word “intense” in front of me, I’ll say something like “Oh, I thought it was in a school” or “I didn’t know you liked to go camping,” so this theme was right up my alley. I appreciated that TENT was split up between two words in each of the theme answers, with ROTTEN TOMATOES easily being my favorite at a clean 14 letters.

Grid-wise, I felt that the fill on this was quite smooth, which I feel any time I come in under 5 minutes. I liked that we got some longer answers in the upper right and bottom left corners with 11d [“‘For real?’”] IS IT TRUE, 12d [“Takes over for”] RELIEVES, 41d [“Site with drilling equipment”] OIL FIELD, and 42d [“Workplace rookies”] TRAINEES.

Overall, definitely a fun, intense-ish (but can be solved outside of tents) puzzle for a Sunday.

Theme: Wordplay with sports teams’ names. Each theme entry is a familiar phrase of the form that ends in a word that is also a team name. Each phrase is of the form verb THE team name, and of course clues are crossword-wacky. 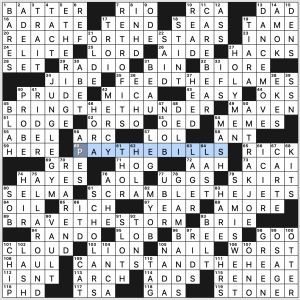 I enjoyed these for the most part. Good consistency and (mostly good) surface sense. It’s surprising there are no MLB or MLS teams here (RELEASE THE KRAKEN seems like a gimme), and of course, it would be nicer if there were more women’s teams included than just the one.

THEME: Foods (that you’d likely see at a Thanksgiving table) are both found in a single rebus square within a common phrase and at the the ends of common phrases. 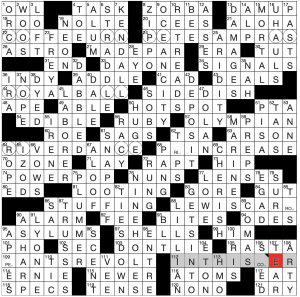 THEME #1: Answers are on the sides of theme answers

Revealer: [Thanksgiving serving, and a hint to the circled squares in this puzzle] SIDE DISH.

THEME #2: Answers are in a rebus square.

Revealer: [Thanksgiving serving, and a hint to four special squares in this puzzle] STUFFING.

Super elegant that this is neatly divided into two halves and that the order of the foods being presented within the themers mirror one another.

As I moved my way south, I was certainly wondering what the extra layer would be (I hadn’t noticed the lack of circled letters down there) as it seemed like too simple a theme for WaPo. Excellent surprise.

No real hangups for me, nor did I stumble across too many new names. I mean, I forgot Natasha LYONNE‘s name, but I really hope there’s another Russian Doll series coming out. That show was great. I may just go and rewatch it. I wasn’t overly familiar with FREYA or ZORBA, but easy enough with fair crosses.

What a fun puzzle today! 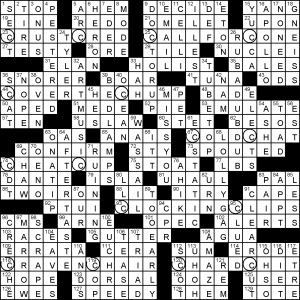 DAB’s puzzle has a simple concept, but one that really comes together. “See To It” is interpreted to mean “Add C to each of two words in a phrase and make wacky answers”. As a rule, this strains the grammar more than just altering one part of the answer. There are examples of that seen here as the theme is stretched to Sunday size. Of the eight answers, [Ice-cream shop cry], (C)ALLFOR(C)ONE is the most obviously stilted, but many require some degree of gymnastics in the clues to land, sort of.

A tree grows in Crossworld!

THEME: Phrases that have parts of a tree in them

THEME ANSWERS: (from bottom to top)

This is a lovely them, pulled off with elegance. Simple, but a nice little aha moment, especially once the solver peeps the title and can appreciate that the tree is indeed represented from the ground up.

[Boards as a group?] for LUMBER is an outstanding clue. Nice one! [Bad lighting?] is pretty good too, though there’s a lot of cutesy clues out there for the (terrible) crime of ARSON.

Thoroughly enjoyed this one from top to bottom. I suppose I solved it backwards in a sense.

4 stars. That’s a lot of Paul Coulter in Universal this week!