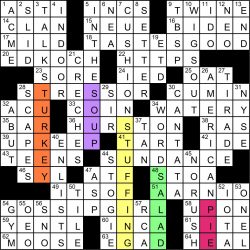 Hello there, peoples! Here is hoping that Turkey Day will be a special one for you, or, at the very least, a relaxing and uneventful holiday.

Of course, with Thanksgiving around the corner, I’m sure many will think about the good food that will be consumed, and some of those foods appear in today’s grid. Five theme entries are not references to food but contain words that are associated with what you would see on the dinner table on Turkey Day.

I remember being roped into watching GOSSIP GIRL by a former beau, and she always loved the “XOXO” line that was used by one of the main characters, and now I couldn’t get it out of my head for months after being exposed to the show (54A: [TV teen drama starring Blake Lively]). After writing this, I can’t get it out of my head right now. Absolutely love seeing a Harlem Renaissance leading icon, HURSTON, smack dab in the middle of the grid (36A: [“Their Eyes Were Watching God” author Zora Neale ___]). Actually have a near-full bottle of CUMIN in my cabinet, as I usually utilize it when I make my (really good) homemade chili, but nothing else (30A: [Curry spice]). Let me know on what dishes you use cumin in, so I can do the same and have my friends exclaim “TASTES GOOD” next time I make some meals for guests (18A: [“This Thanksgiving meal is delish!”]). Probably some vegetable stew or part of a meat rub is what I’m thinking in emptying out this bottle!

“Sports will make you smarter” moment of the day: HEAL (64A: [Make well]) – Over the past 30 years, Australians have made a big impact in the National Basketball Association, and one of the first Australians to play in the League was guard Shane Heal, who debuted in the NBA in 1996 with the Minnesota Timberwolves. Heal played on four Olympics teams, captaining the Boomers (nickname of Australian men’s national basketball team) in the 2004 Olympics. Heal’s 28 points against the United States’ “Dream Team” in a 1996 Olympic warm-up game attracted the eyes of NBA scouts, leading to him being signed by the Timberwolves. Heal’s daughter, Shyla Heal, is a basketball star herself, as she was drafted No. 8 overall in the 2021 WNBA Draft by the Chicago Sky. 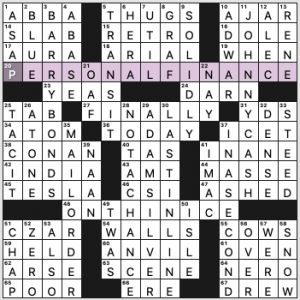 Here’s a puzzle for your investment advisor:

Interesting theme, if a tad dry.

Theme: Famous people with the initials M.C., none of whom are surnamed Escher. 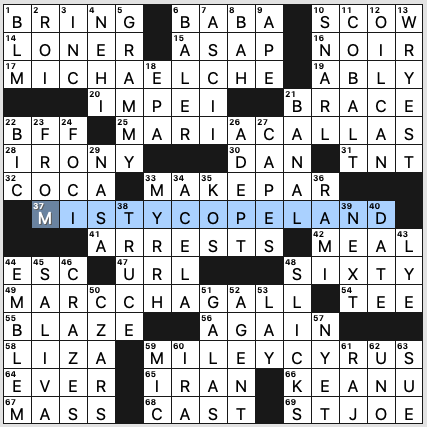 The fill doesn’t sparkle so much, but it’s serviceable. I remember feeling there were an awful lot of abbreviations, especially near the top (BLM, INC, EPA, ASAP, ASCII, BFF, NASA, KOS).

Given the cluing today, even if you don’t know the 12 Disney Princess off-hand, anyone should be able to enjoy the themers. The rest of the fill is excellent as well and grid layout is intriguing too. A fun solve! 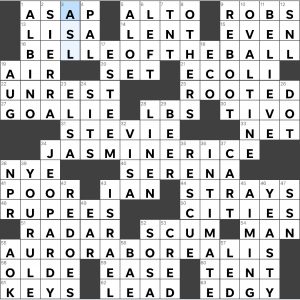 Theme: the first word of each themer is the name of a Disney Princess

The title is a nice setup for the theme today, queuing the solver to watch the start of the themers for Disney Princesses, and while there are now many of them, the clues make it clear which ones are needed. As stand alone entires, each themer today is strong and delightful. As a set, they are certainly a dream come true! BELLEOFTHEBALL was a quick fill for me, and who doesn’t like this book-reading, independent, curious girl-turned-princess? JASMINERICE took me a few moments longer but is a very clever clue for this sassy, adventurous princess who puts up with Aladdin’s foibles—she and her pet tiger Rajah were instant favorites of mine growing up. The last one, AURORABOREALIS, racked my brain, given that Sleeping Beauty is a classic that I didn’t read the fairy tale or watch the Disney movie often, though again the clue helped me puzzle out the princess soon enough. To be honest, Maleficent and the dragon she turns into always captivated me more that Aurora. Nonetheless, this is an excellent, fun theme and themers!

Stumpers: EDGY (“modern” or “artsy” were where I was going), AIMING (just didn’t click for me, especially that final letter), and REBOOT (just didn’t know, needed crossings)

In addition to all of the Disney Princesses today, it was enjoyable to see the other women in this puzzle today too: LISA [Actress Bonet], STEVIE [Nicks of Fleetwood Mac], Serena [Williams who won that Australian Open while pregnant]—still so impressive!, and [Janis ___ (“Mean Girls” character”)] IAN. Though not official, ELSA [“Frozen” Queen] makes an appearance too.

THEME: Common two-word phrases where the last letter of each of the words in the phrases cycle through LGBTQ. 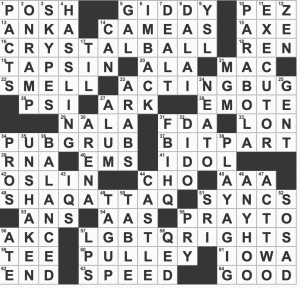 Some nice finds here and a fun, if somewhat more challenging than usual, grid. I got pretty hung up on FBI HQ /ATTAQ (which of course is easily filled in once you get to the revealer). TAG UP was difficult for me too because a clue like [Touch base again] typically denotes a RE- prefix. So I plunked those two letter in confidently and didn’t want to change them. PLAY A GIG felt off to me (and I PLAY A GIG weekly in that context, but I don’t think I say it like that), so that was hard to uncover as well. Didn’t know DIDO and was certain I didn’t have LON right because I couldn’t get it to jibe with the clue [Apt-sounding name for a gardener]. I finally realized that it sounds like LAWN… which… sounds more apt for a landscaper I think.

Thematically, consistent and cutesy, with those letters all being to the right. Not much else to say about it, though I’m sure SHAQ ATTAQ was difficult to both find and build around! 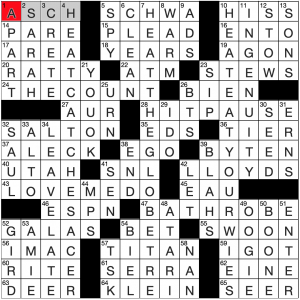 Tricky! I had to do a couple of double takes to make sure I got what was happening:

Wow. We have nonsense phrases left over, but the heat is rising. This puzzle no doubt inspired by the cold weather that is coming, although it actually doesn’t get that cold in Oregon, where Matt Jones is. One of these days I will be smart enough to move out there where the nice weather is myself! 4.6 stars today.

Lots of obscurity this week:

Another Jonesin’ coming next week! And I have to do it: 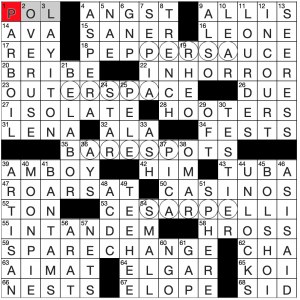 Am I the only one who doesn’t know who CESAR PELLI is? I hope so! But if not, we can all learn something new. Good theme for a Tuesday, and the crossings for 53A are not so hard, so the themer is easy to figure out. Quick time for me on this puzzle, but I like Bruce Venzke puzzles! Haven’t done one in a while, so this was nice! 4.5 stars from me.

Everyone have a safe and healthy holiday week!