Theme: QUARK flavors are found in familiar phrases (39a, [Subatomic particle whose flavors are scattered about this]). 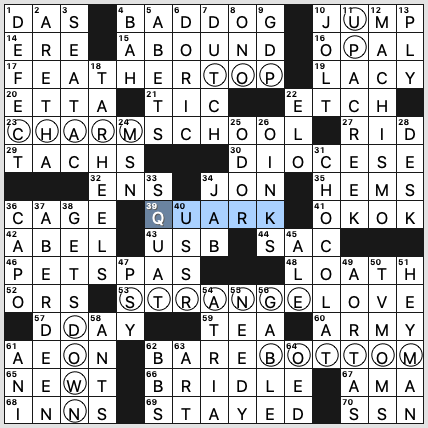 Nice, solid theme and fun entries. A lot of them, too. Six full-length theme answers plus a central revealer is more than your average amount of theme material.

It didn’t seem to weigh the grid down though as there are several nice long fill entries: MACHISMO, CHOCOLAT, ABERDEEN, and TARHEELS along with DIOCESE and PET SPAS. And plenty of the sixes are assets as well like “BAD DOG!” and “HEY, MAN!”

Impressively clean puzzle given the amount of theme material. Oh, and a fine theme, to boot. Four stars. 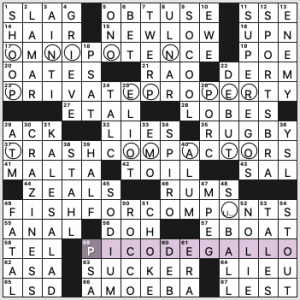 I really like this theme! The revealer is 59a. [Topping made with this puzzle’s chopped and squeezed ingredients], PICO DE GALLO. Now, I’m not a fan of actual pico—it’s the raw onions I can’t take. We’ve got a “chopped” ONION, PEPPER, and TOMATO in the circled letters dispersed in the first three themers, and then there’s a rebus square in FISH FOR COMP{LIME}NTS, with that lime “squeezed” into the pico. And heck, let’s make it a FISH taco you’re topping with pico de gallo.

I did get distracted by the salt, though: 1d. [1993 Salt-N-Pepa hit], SHOOP, and 45d. [Concern for one with hypertension], SODIUM. Is that part of a standard pico recipe? And no, I’m not flagging Salt-N-Pepa as a dupe of the “chopped” PEPPER.

3.75 stars from me. The theme was fresh and zesty, but the fill wasn’t up to that level.

Theme: The final word of each theme answer is the last name of a famous Amy 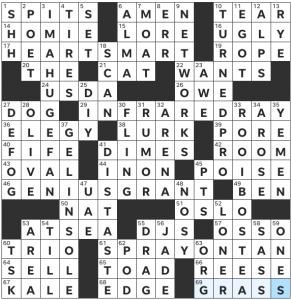 This puzzle is interesting because it has a proper noun based theme, but you don’t actually need any of the proper noun knowledge if you solve it like a themeless – GENIUS GRANT (another name for the MacArthur Fellowship) is the only one clued with a proper noun, and it’s not about an Amy. I personally like this, as proper noun themes can be tricky to appeal to all solvers since everyone has a different knowledge base.

Is the phrase “Dear Amy” a thing? I’ve heard of “Dear Abby”, and Google tells me “Ask Amy” is a popular advice column, but I don’t see much for this particular phrase. After finishing the puzzle and looking up names for this recap I realized I had heard of all four of these Amys, but on a first look at the puzzle I only recognized Amys TAN and GRANT (and I mostly know Amy Grant from her appearance on “The Masked Singer”). A fun fact about Amy Ray, though – she and her Indigo Girls bandmate Emily Saliers are featured in the crossword documentary Wordplay! Here’s a clip:

Thoughts on the rest of the puzzle: 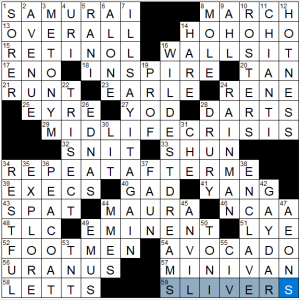 As much as I love marquee answers in themelesses, it was nice to work through a good chunk of the grid before getting to MIDLIFE CRISIS (29a- Coming-of-age drama?), and similarly have a good bit to go after REPEAT AFTER ME (34a- Swear words?). ILL SAY IT AGAIN and the Taylor Swift song WILDEST DREAMS are likewise centrally situated. All assets to the grid for my money.

To the extent that any area was more difficult than others, I did trip myself up in the SW, with “Odets” for LETTS (58a- Pulitzer-winning playwright Tracy with roles in “The Post” and “Lady Bird”) — I’m both surprised that Odets didn’t win a Pulitzer, and learning that Letts has — and “narcs” for EXECS (39a- Suits, briefly). I don’t really have a good reason for either of those mistakes, but the crossings got much easier once I erased each. 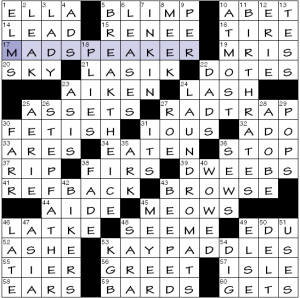 That gives us MADAM SPEAKER, RADAR TRAP, and REFER BACK. Whew. Not the most forthcoming theme, even with the title and the hint. 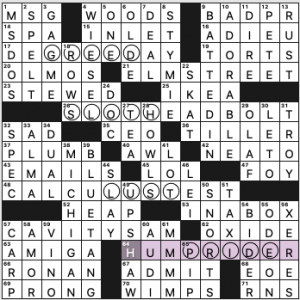 It’s Amy stepping in for Ben this holiday week.

The circled letters are all skipped over in their Down crossings, which means Brendan got to clue a bunch of 2-letter words for a change. When you fill those squares with assorted deadly sins, you complete the Across themers, and while the circled letters appear to be unchecked, they’re basically checked by the limited options for 4- and 5-letter deadly sins that fit.

It’s certainly an ambitious theme, and I admire most of the sin-filled Down crossings. To have WISE expand to Elie WIESEL with letters from two theme sins? Nifty. But the actual theme answers that could hide the sins, well, they don’t hide all the sins. HUMPRIDER is not worth the payoff of committing the sin of PRIDE! It’s so meta. 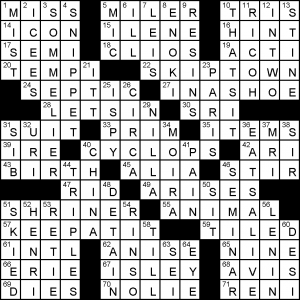 Dave Taber & Laura Moll’s theme is fairly subtle. There are two revealers: CYCLOPS and EYE. Every other entry has exactly ONEEYE. An extra aspect of the theme is that each answer’s clue has exactly one “I” too. I’m not sold on the latter constraint, as it explains some of the more awkward clue choices, and doesn’t add much more than an “oh” to the puzzle.