Happy Thanksgiving, crossworders! There are no WSJ or Fireball puzzles today due to the holiday. 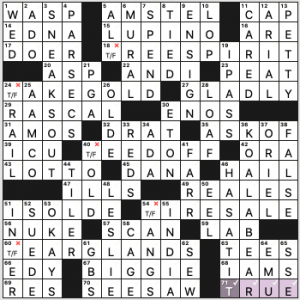 Amy again, filling in for holiday Ben. Today’s theme is a two-letter rebus that doesn’t work like the typical rebus theme. Each rebus square is filled with both T and F (I entered T/F), and there are two clues for each theme entry, one working with the T and one with F:

The revealers are 71a TRUE and 38d FALSE, both clued [One of two options in five squares in this puzzle]. I like that the rebus squares all appear at the start of the longer Across themers, a solid consistency. I don’t love a couple of the theme phrases, but overall I like this riff on the two-pronged rebus concept.

3.66 stars from me. Maybe I’d have liked it better with crisper fill—ditch the 7-letter themer in the middle, still have the 10s, the 8s, and the 5 and 4 revealers. Thoughts?

Editor: Erik Agard
Theme: The final word of each theme answer is a word that can come before “hop” 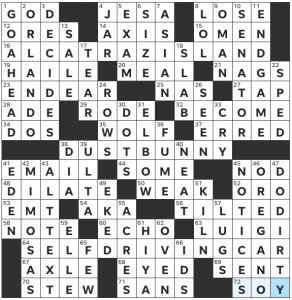 Did anyone else have the cha-cha slide running through their head the entire time they solved this puzzle? It’s too bad there weren’t any references to Charlie Brown or everybody clapping their hands… Jokes aside, this is a solid theme. The ALCATRAZ ISLAND clue is very apt for today (one of many in this puzzle, actually), and DUST BUNNY and SELF DRIVING CAR are both fun phrases. I love how Brooke took advantage of having fewer theme answers to create big corners filled with fun entries – I mean, there are soooo many good 7 letter answers here! GO AHEAD, END GAME, ALT TEXT, DO DIRTY (and that’s just picking my favorite one from each corner).

I hope everyone celebrating today has a safe, restful holiday! 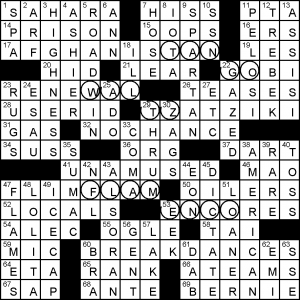 Today’s puzzle by David P. Williams, has a theme that you likely only appreciated, if at all, after solving. It has no specific theme answers, other than the revealing BREAKDANCE. Each of TAN/GO, WAL/TZ and FLAM/ENCO are hidden between two rows, as indicated in the circles in the answer grid. There is definitely some flare points for using TZATZIKI to hide the WALTZ.

The rest of the puzzle played very “early week” for me, with few sticky spots. ROADWIN was about as esoteric as things got today.

A legendary puzzle for sure! 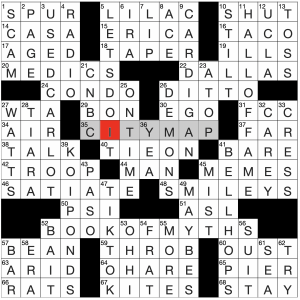 THEME: Places to find legends of all types.

Very fun, easily understood and consistent theme. An excellent repeating clue. I’m not sure I understand the significance of the theme clues containing an asterisk. Did I miss something there? Usually, an asterisked clue will have come with a revealer. Don’t think this needed one at all.

Took me forever to see STILT [Elevation device in a flood-prone area]. I can’t help but visualize a guy from a circus act walking his way to safety saying “Glad I had these stilts handy!” But of course, houses are stilted as well.

Theme: The word PIE has been slicing into each of the themed answers. When it’s removed, you’re left with a different word or phrase. 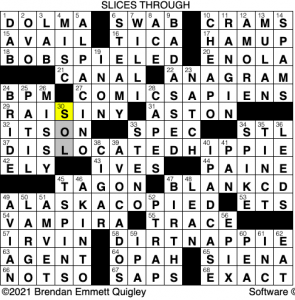 The insertion of PIE was particularly appropriate for the holiday, though I’d also say that frontier references such as those found in 49a are a reminder of this holiday’s roots in settler colonial narratives in which white Europeans dispossessed Indigenous peoples of their land. The idea of the “frontier,” after all, leaves out the fact that these lands belonged to someone before white one-day Americans arrived.

A few other things I noticed