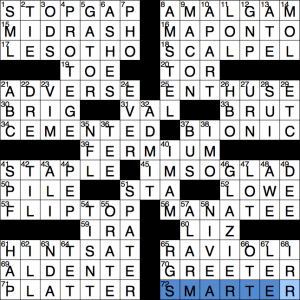 hello and welcome to episode #703 of matt gaffney’s weekly crossword contest, “Deciphering Contest”. for this week 3 puzzle, matt gives us the instructions: Happy T. Hanks-Giving, everyone! This week’s contest answer is three Tom Hanks movies whose titles total 23 letters. all right. what are the theme answers? there are no long answers in the grid (two 8s and a whole bunch of 7s), and the only entry whose clue jumps out as being thematic is {Suggests subtly, as a meta title might a movie title} HINTS AT. hmm. what could that mean?

well, the meta title is “deciphering contest”. deciphering implies the existence of a cipher, or code, and from the list of tom hanks movies, that certainly suggests the da vinci code. but from there, the trail runs pretty cold. i did notice that CONTEST is a valid cryptogram of DA VINCI (the T’s in the 4th and 7th position match up with the I’s in DA VINCI), and while that is interesting, i haven’t been able to make any progress with this idea. what i’d like to happen is for instances of the letters in CONTEST in the grid to jump out at me and demand to be deciphered into DA VINCI, or vice versa. but of course, even if we make that association, it’s only a partial cipher, giving us six letters to work with, and there aren’t really other tom hanks movies that can be spelled using only the letters of CONTEST or the letters of DA VINCI.

okay, here’s my next thought: what about entries, or even pairs of entries, that have some letters of CONTEST, which when you convert them into DA VINCI, produce letters in the right place to at least partly spell out tom hanks titles? perhaps by piecing together parts of it, we could learn a few more letters in the cipher and then build out from there. i didn’t find anything like that either, though. i did notice that RAVIOLI is in the grid (right next to HINTS AT, in fact), and it has the pattern _AVI__I just like DA VINCI. but i don’t know what to do with that either.

what about other ideas? the actual code or codes in the da vinci code? well, there are some fibonacci numbers, but picking out letters in fibonacci-numbered squares produces SSTOGAAACO, which is not promising. there’s also a cryptex in the film; that’s unlocked with the code APPLE. could that matter? maybe. i don’t really expect matt to make us dig this deep into the desultory plot of this film, as it has more holes than a sieve, but there are three across answers that contain all of the letters of APPLE (if you don’t insist on there being two P’s): SCALPEL, STAPLE, and PLATTER.

what else could it be? well, i just noticed that HINTS AT itself is also a valid cryptogram of DA VINCI. but that’s actually making me less sure that cryptograms are relevant at all, since it’s just not a very compelling coincidence.

an old meaning of cipher is a zero, so “deciphering” could be cryptically interpreted to mean removing zeroes. what can we do with that? appropriately, nothing.

well, i’m out of ideas. i might as well guess the da vinci code as one of the films, which leaves nine letters for the other two. i think the only way to do that using movies where hanks has more than a cameo role is big + splash. that’s not the worst guess i’ve ever made; BIG might even be suggested by the presence of BRIG in the grid, although i have no mechanism to explain why we’d look at that entry or remove the R. but i might as well send it in.

somebody please let me know what i missed. meanwhile, i hope you all have a safe and happy t. hanks-giving!