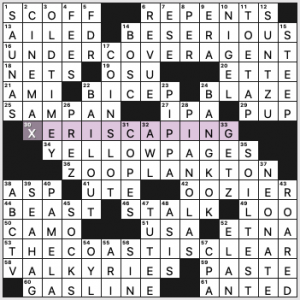 Another quick write-up so we can tend to our streaming-TV entertainment needs.

The little gimmick here is that the three central entries, staggered 11s, start with X-Y-Z: XERISCAPING, YELLOW PAGES, ZOOPLANKTON. T-U-V represents with THE COAST IS CLEAR, UNDERCOVER AGENT, and VALKYRIES, but there’s no entry starting with W.

Other fill I liked: “BE SERIOUS!”, CINEMAX, OLD-TIMEY, BANGKOK.

Surprised there’s no question mark in this clue: 27a. [Draft letters], IPA. Letters for some draft beer, not military draft abbreviations/codes. 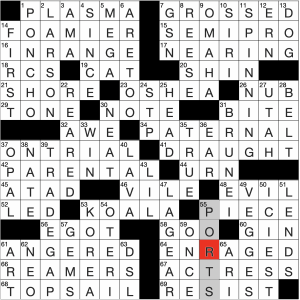 I’m not the biggest anagram fan, especially when they’re super straightforward like they are here, so this one wasn’t calling my name. Of the set, I found the top and bottom pair the most interesting.

Highlights for me were a couple of the clues:

55A [Its initial three letters spell an apt dessert] PIECE. How have I never noticed that?

65A [Mario’s middle name?] ARI. The name ARI is in the middle of mARIo.

Both of those are unofficial Universal trademark clues, but I love ’em.

Oh and [One may sit on your keyboard] CAT. How true! In more than one sense for me. 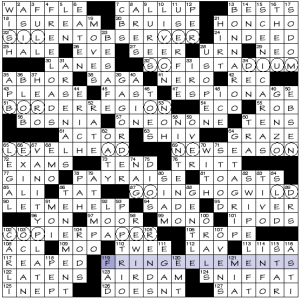 Pretty good theme, excellent revealer. The title is a bit iffy, even though I do see where it’s going with the periodic table and pieces therefrom.

Solid puzzle. Oh, and gas too. But no liquid! 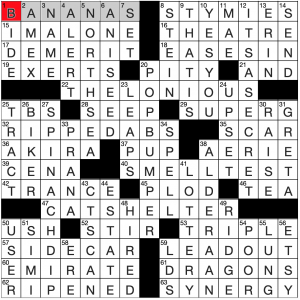 A fun puzzle today! Steve’s puzzles are always lively. Check out his site for more great content. No real snags during my solve, but I did learn a thing or two in this puzzle. Nothing wrong with that! Keeping this short today, since Mich-OSU is today! 4.6 stars from me.

Off to watch football! 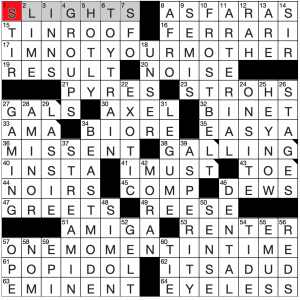 I will take a time under 15 minutes for this one. All kinds of issues in the central eastern section. as you can see by the error marks. Somehow my brain wasn’t working correctly while in that area. Can I blame it on old age? My themeless solving has gotten pretty good in the last few years, but every once in a while nothing works. I DID, however, finish Boswords clean in the fall league! I’ll take it! Greg, I think you got me on this one. Wait until next time! 4.7 stars from me. 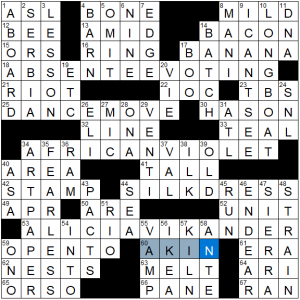 Quick puzzle from Stella with a fun theme set today. Each themer is two words beginning with A and V:

18a- (Process for mailing in a ballot from out of state) ABSENTEE VOTING.
34a- (Purple flower native to Tanzania) AFRICAN VIOLET. I *adore* African violets. I wish I could keep any plants alive / trusted myself to try.
53a- (Swedish actress who played Lara Croft) ALICIA VIKANDER. I’ve never been much interested in the Tomb Raider universe but I quite liked Vikander in The Green Knight.