Happy Thanksgiving to all of you who observe it! I hope you’ve had a wonderful week and reached out to the loved ones in your life to let them know how much you value them, especially with the year we’ve just had. Thanks to all of you who make up this Fiend family – we appreciate you!

Just in time for post-Thanksgiving shopping, today’s Sunday NYT reimagines standard “Garage Sales Pitches” and phrases in the context of funny or quirky sales items. Some of these were cute, while a few (like CANT TURN THAT DOWN and DOOR BUSTER DEAL) genuinely made me laugh out loud. Bravo to Jeff Kremer for tackling this puzzle, which I believe is his debut! 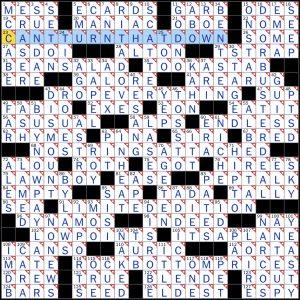 Other random thoughts:
– 62A: RHYMES [Huey, Dewey and Louie, e.g.] – This clue made me smile!
– 122A: BLENDE [Name for zinc sulfide that is one letter short of a kitchen appliance] – I really like this approach to cluing an entry that might be unfamiliar to many solvers.
– 69D: ROY [Pam’s former partner on “The Office”] – We’re so used to seeing women clued solely in reference to men that it is a lovely turnabout to see a man clued solely in reference to a woman.

One last thing: If you enjoy puzzle solving and want to support an incredible expansion of the indie crossword outlet AVCX, check out their monumental Kickstarter! They’re aiming to expand from a weekly 15x puzzle to two weekly 15x puzzles, a weekly cryptic puzzle, 1-2 weekly midi puzzles, and weekly trivia. Wow! I’ve gotten a peek behind the scenes of this project and I promise you’re going to want to get in on the ground floor. Check out their Kickstarter here!

That’s all from me for now. What did you like about this puzzle? Tell us in the comments section!

THEME: Pictures, with one letter changed to make another word. 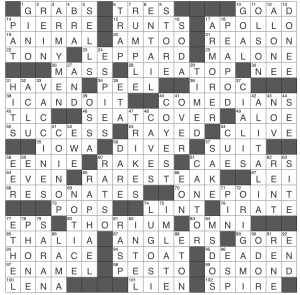 REVEALERS: (spelled out in the changed letters)

Well that was an odd experience! Loved it! Something different with an air of mystery about it that held for the duration of the solve. I kept thinking the odd colors themselves would play more of a direct role in the grid, but not so! And even though the pictures were relatively easy to determine, for many of them, the letter that was being changed could be almost any of them… RIVER could change to DIVER, or ROVER, or RICER, or RIVET… so it’s not just like you could plunk them in with 100% confidence. That’s what gave it the bite that it needed though, so it wasn’t overly easy and you still had to engage with the images.

I found this much more challenging in general than a “normal” WaPo (though I’m starting to question what I mean when I say “normal”). Particularly the NE corner. Like that entire big area. I really struggled in there. Tough clue for COMEDIANS [Crack team?] (not completely sold on that one…) and ARMORER [Mail carrier?] and REASON [Grounds]. New name for me OLSON… DONEE is an entry I’m never all that confident in… Forgot if APOLLO was two P’s or two L’s… but a lot of help with the ALONE / MALONE clue [Adjective meaning solo found after the first letter of 25 Across]. So I was thankful for that. AL ITALIA NOV and SEE were also tough for me in that general area.

The last letter I filled in was the G in GRABS / GINO. I wasn’t familiar with Severini. However, you can’t really call it a Natick because… well ?RAPHIC DESIGNER really nudges you hard toward that G. 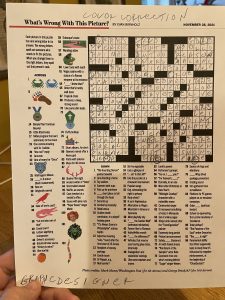 Really enjoyed this one and the work that went into it. Looks like there’s a deserved shoutout to Mark Mann for Ernie art and George Brich for Leia (I thought that was Annie for a second cuz red hair…) I wonder if the others were licensed stock images and the ERNIE/LEIA images were unavailable. That’d be my guess.

Also I solved on paper. And I accidentally printed it on card stock. Which was wonderful. From now on, if I have to print a puzzle, card stock it is!

Regardless of the inevitable differing of opinions about this quirky offering, I think it’s safe to say that Evan’s willingness to take risks and try something totally different is universally admired. Bravo, Evan!

Enjoy this from UMI (artist name coming to a crossword near you soon, I’m sure!)

The Paul Coulter show continues. This is… very, very odd to me. I mean, nothing against Paul at all, but I feel like his is the only name I’m seeing as of late. Just seems very lopsided for a puzzle that has been so diverse and inclusive when it comes to constructors!

I think that makes over 50% of the last two weeks’ worth of puzzles Paul’s. Let’s go back and check… Yea… I count 8. Wowza. Anyway…

THEME: Things that one might way to an object. 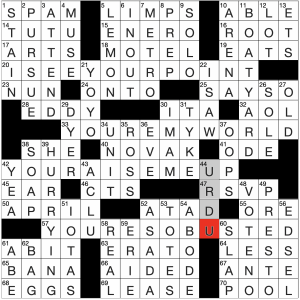 Cute. Reminds me of Evan Birnholz’s recurring Captain Obvious theme. It’s a lot more fun to picture these people saying the phrases in a seductive manner. At least the first three.

Fun mistakes for me:

Solid, if familiar all around.

Theme: Familiar phrases with OUT as the second word have their meanings altered. 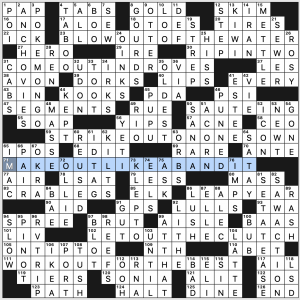 Mostly good consistency. Some work better than others. And there’s a touch of humor here that often misses the mark for me in these types of themes. Overall, it works.

Top fill has gotta be POKE MONGO, er, POKÉMON GO. I also like ANCHOVIES (only in my puzzle, not on my pizza), SAW ACTION, LEAP YEAR, ON TIPTOE, and CRAB LEGS. There’s nothing too far out of left field though I don’t think I’ve ever seen RV TRIP in a puzzle before. Clues are aggressively straightforward.

Theme: Each themed answer includes an anagram of DRAPES as the final word. 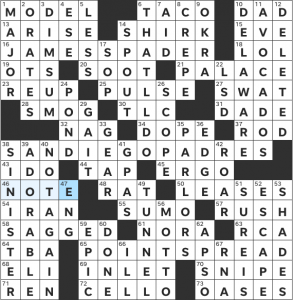 I got SAN DIEGO PADRES first, and then the theme immediately clicked for me from there, helping me to fill in different bits of both JAMES SPADER and POINT SPREAD until I actually figured out what the two answers were. I appreciated the anagram here, and I’ll be definitely keeping this set of letters in my back pocket for when they hopefully next come up in the Spelling Bee.

We’ve got this nice set of diagonal black squares in the center, showing the asymmetry of the puzzle. As I’ve said in past reviews, I really love the long corners we get with columns of DELAWARE (10d [“Dover’s state”]), AVOCADOS (11d [“Milkshake ingredients”]), DELETED (12d [“Edited out”]), SINISTER (38d [“Ominous”]) ADORABLE (39d [“Really cute”]) and NOT AGAIN (40d [“This can’t be happening a second time”]). Plus – note that ADORABLE and SINISTER are right next to each other.  *chef’s kiss*

That’s all from me for today! I enjoyed the creativity in this puzzle and its theme answer, and I certainly learned a lot from it! 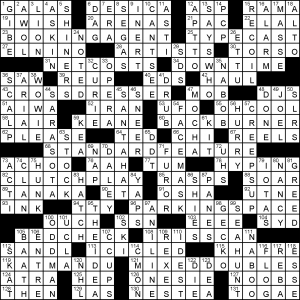 Even with two revealing parts, the title “Two for Two” & MIXEDDOUBLES, Ed Sessa’s puzzle theme is somewhat inscrutable. It seems both words go with DOUBLE?

For the most part these work better than is typical for this theme.