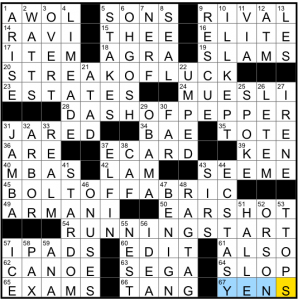 Theme: All theme answers are of the form “[Word that can mean ‘run fast’] OF [other word]”

As I solved today’s puzzle I noticed that all of the theme answers were structured the same way, but I couldn’t see immediate connections between them otherwise, so I thought “hm, I’ll wait to see how the revealer brings everything together”. So imagine my surprise when I hit the revealer, and it mentioned nothing about the ____ OF _____ format! It’s a good revealer for the theme answers, and I like how none of them have anything to do with movement, but I felt like part of the puzzle was left unexplained. BOLT OF FABRIC was probably my favorite theme answer (I’m a big Project Runway fan), and I liked DASH OF PEPPER but the “pepper” part of the phrase felt somewhat arbitrary. But I pretty much never cook, so maybe this is a more common phrase than I’m giving it credit for.

The fill today felt remarkably clean to me, especially given that the grid only has 74 words (the maximum allowed is 78). All the sections feel very connected to the grid, and the NW and SE corners in particular are well-constructed from a technical standpoint. My favorite answers in the grid today are LIMEADE and RAGTAG, and I like STARDOM too although I found its clue, [Fame in the field of sports or entertainment], to be a little too wordy. I kind of wish there had been a bit more here that was new/different/surprising in either clues or fill, but what is here is so Monday smooth that I can’t have much of a problem with the puzzle overall.

Happy Hanukkah to all celebrating! 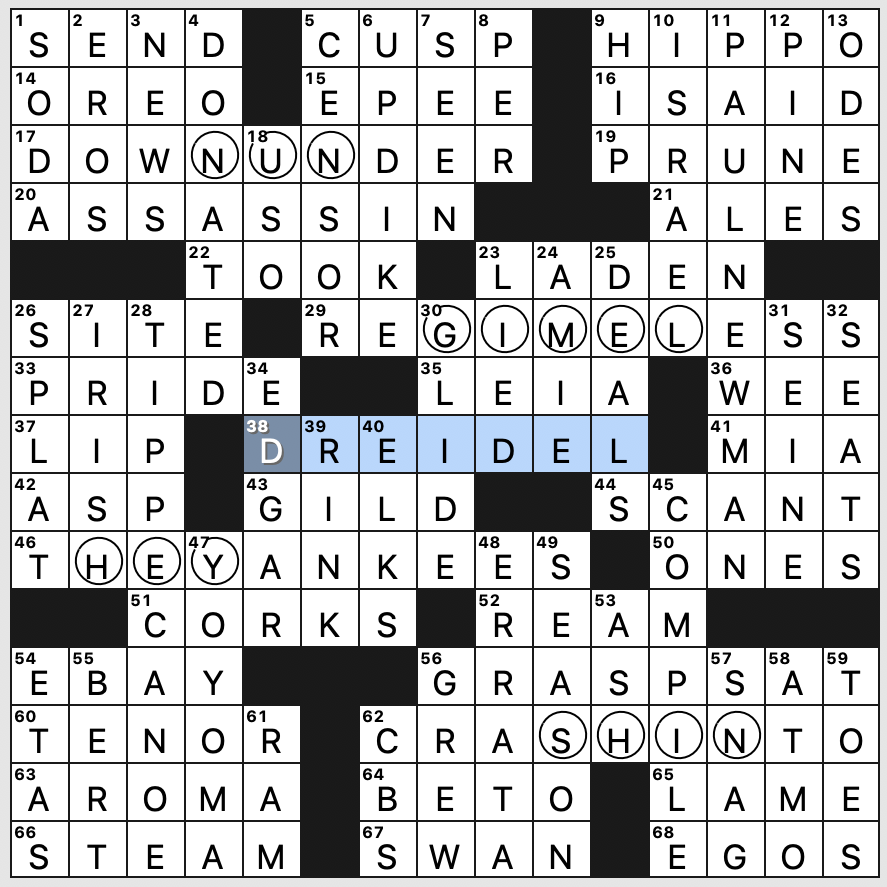 I’m afraid I don’t know the Hebrew alphabet but I have heard of GIMEL (it’s just fun to say). I haven’t ever seen the word REGIMELESS used anywhere, though. For you other DREIDEL-illiterate solvers, learn more about the game here.

It’s nice to see this theme to celebrate Hanukkah instead of the usual Christmasy fare (which I’m sure we’ll get in due time). And the title is so perfectly apt. Plus, there’s the theme-appropriate ISRAEL making an appearance at 10d.

3.75 stars. Happy Hanukkah to all those celebrating the holiday! 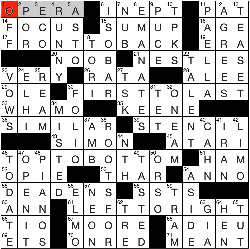 I don’t think there’s a lot to explain here even though there’s no revealer — the theme is just that cut-and-dried.

That being said…there’s a bit of assumption in that “usually.” Arabic is written right to left; many East Asian languages are traditionally written top to bottom, right to left, although based on my cursory Googling it sounds like modern texts in Chinese, for example, are more likely to be written left to right. (Yeah, yeah, I know. I wish that I knew from experience rather than cursory Googling. I really wish my parents had made me learn Chinese as a kid!) I would’ve liked to just see a clue like [How books in English are read] for 17A rather than the assumption that how it is in English is what “usually” happens.

I wasn’t crazy about the fill in this puzzle. Between RATA, OPIE, the abbreviation AMB., SSTS, TPKS, POR. as an abbreviation…it was a little too much crosswordese IMO. 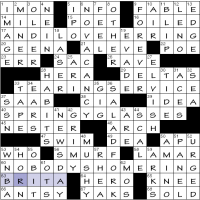 Taking inspiration from the Beyoncé song, the gimmick of this theme is adding in the tetragram R-I-N-G to familiar words and phrases for wacky results.

With the first one, I thought an additional unifying element was going to be song titles. 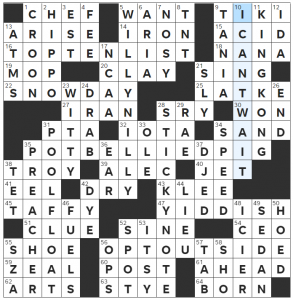 Editor: Amanda Rafkin (despite a little byline mix-up on the site!)

Theme: I couldn’t get the theme today and wondered if it was a themeless, which would be a first! But Sally’s blog points out that the first word of each answer is “spun” (indicated by the title)– i.e. an anagram of each other. Additionally, a dreidel is a TOP. USA Today themes are often subtle, but this one felt particularly so.

Happy Hanukkah y’all! (Tonight will be the second night.) I completely spaced on this last night, and didn’t have any candles, so I lit one of my Diwali lamps instead. There was lots of good Hanukkah content in this puzzle:

The two center bonuses, WILLY NILLY and STICKY NOTE were lovely, and I think the NE corner was my favorite, with KING KONG alongside I CANT WAIT. 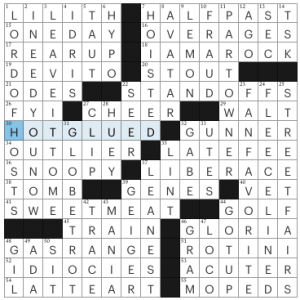 Seemed quite a bit harder than usual, though it might just be that I was distracted while solving. Lots of clues left me drawing a blank till I had enough crossing letters in place to start to piece things together.

Fave fill: HALF PAST, I AM A ROCK, LEAVE IT TO ME, GLOBE-TROT, FAN FAVORITE (great!), STREET FAIRS. 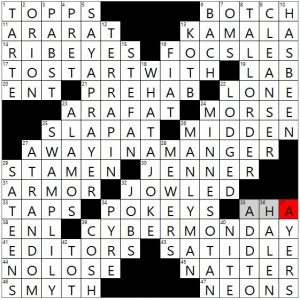 Straightforward grid from BEQ, and unfortunately an abbreviated review from me.

AWAY IN A MANGER (27a- Carol with the lines “The cattle are lowing, the baby awakes”) is the long across connecting the grid. Seasonal, now that Thanksgiving is behind us.