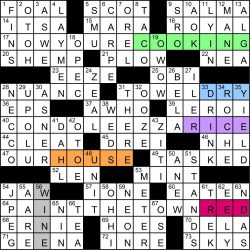 Hello there, all! Hope you all are doing well and that you’re continuing to stay warm!

One way to stay warm, possibly, is having a glass of wine that hits the spot, and WINE is an entry that actually acts as a reveal in the grid, as five other theme entries end with a word that is also a type of wine (56D: [“Ode to ___” (Pablo Neruda poem that hints at the theme in five answers).

Thank goodness that UPOLU (29D: [Volcanic Samoan island]) appeared in one of Liz’s grids about a couple of weeks ago to knock that out quickly, especially since its neighbor, NECCO, didn’t come nearly as quickly (28D: [Candy wafer company]). It is definitely flu season, so was definitely feeling the partial of EEZE (23A: [Cold-___ (sniffer’s remedy)] and OOZE, as I’m hoping to avoid the oozing that’s sure to be produced from nose and other body parts (32D: [Move like hot lava]). No real long non-themed entries, which is kind of a departure from Liz’s grids that she usually produces for Crossword Nation, but still a lot of fun entries, though I now have the antics of The Three Stooges running in my mind as I put in SHEMP (20A: [Brother of Curly]). Nyuk, nyuk, nyuk! Before heading out, just saw that one of the amazing crossword constructors, Kameron Austin Collins, mentioned Liz during a Zoom interview conducted at the end of the Boswords tournament and how influential she has been in the development of his wonderful career as a constructor. The video of the interview should now be in the archive of Boswords’ Twitch page, and, towards the end of the video, you can find the interview and hear the warm words Kameron had for Liz, including his reaction when she reached out to him to say that she really liked one of his published puzzles!

“Sports will make you smarter” moment of the day: FINS (1D: [Dolphin’s propellers]) – There’s Fins, and in the clue for it, there’s “Dolphin’s,” and it’s a perfect time to let you know that the common nickname for the Miami Dolphins is the Fins. (They are also colloquially called “the Fish,” though enough people always bring up that Dolphins are mammals.) Anyways, the Fins, err, Dolphins, were the first NFL franchise to win back-to-back Super Bowls, with the first coming in the 1972 season, when Miami was the first and, to this date, only team in NFL history to complete an undefeated season in the Super Bowl era. That season ended with a 14-7 over Washington in Super Bowl XII. For many years, living members of that team gathered to pop champagne every year after the last undefeated team in a given season finally lost their first game of the campaign. I believe that continues to this day. Who says you shouldn’t live in the past? 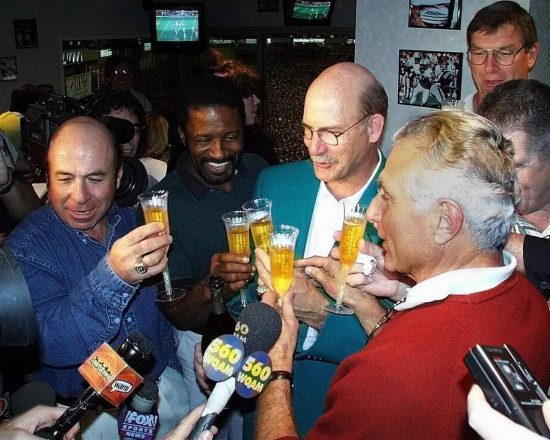 I want to say, from left to right, that’s kicker Garo Yepremian, running back Mercury Morris, safety Dick Anderson and linebacker Nick Buoniconti from the ’72 Dolphins. 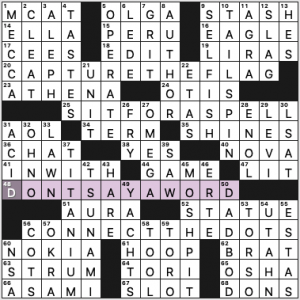 I like that all the theme phrases are all imperatives, but it’s distracting that CAPTURE THE FLAG and CONNECT THE DOTS are themselves games of a sort when the other two themers are not.

Question: Are there actually tournaments for all four of these games? I know there are Scrabble tournaments.

There were a few things that felt a bit on the hard side for Tuesday newbies: CEES, TORI clued via math, AS AM I, ENOL, UTAHN, ERTE, and the twofer of [Exam for some coll. seniors], MCAT and LSAT. The crossings are all pretty accessible, though.

The title is both punny and a misdirection for today’s theme. The puzzle itself is “outta sight”, given how much I enjoyed it! 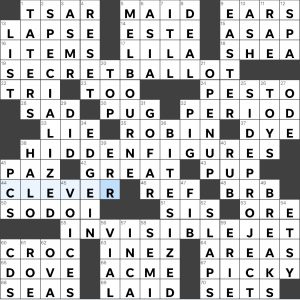 Theme: The first word of each themer is a synonym for unseen, or “out-of-sight”

Today’s puzzle has a strong theme with great themers. The title hints just enough at the theme but not out right, as “outta sight” is used in the sense of being “cool” or “awesome”—a misdirect for true theme of unseen or “out-of-sight”. Each themer is a great phrase on its own that also alludes to the concept of unseen as well as beginning with a word that means unseen. SECRETBALLOT refers to the privacy in voting. HIDDENFIGURES is an excellent true story turned nonfiction novel made into a great movie about the black female mathematicians at NASA who made significant contributions to the space program and its successful missions. INVISIBLEJET, though not in my off-hand knowledge, fits the theme perfectly as well and is a fun Wonder Woman clue.

Stumpers: DOVE (never a diver myself so needed crosses), ACME (wanted “apex” to fit), and SODOI (not a common phrase for me, needed crosses for this one as well)

Though it took me a while to complete the grid, I also enjoyed the clean fill, fun grid, and excellent clues (such as MAID). Lots of women including people of color represented in both the fill and cluing. There were so many delights in this puzzle for me today, but one of the particular standouts are the four long downs that are not part of the theme: SPECIALIZED, MELBOURNE, BITESIZED, and SIDEPROJECT. As I saw these appear, I wondered for a moment if it was a theme with the downs instead or if there was more to it—I don’t think so but if I missed something, please let me know. They are still impressive to have worked into the grid, and there are several 6-letter fill throughout as well. This puzzle is CLEVER indeed! Awesome collab from Brooke and Doug—hope to “see” more!

I was actually stunned, in spite of myself, when I opened the puzzle and saw the byline. I said aloud before opening “Alright, here we go, Paul!” But I was just kidding. Because no possible way could that be the featured constructor again, right? Wrong. 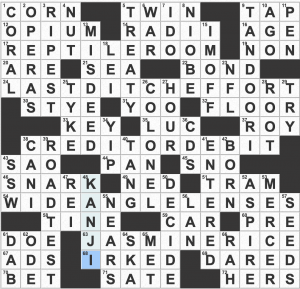 Well constructed and hits all the check marks for solid hidden-word-in-phrase puzzles. Colorful, unforced phrases. Recognizable careers (“Dean” is oddly specific in comparison). Hidden word is bridged within the phrase.

A couple things make me grumble. First, I feel like I’ve seen this theme so often (or job-related themes in general), it’s becoming somewhat tired. I feel like the theme itself needs to be more refreshing. Then there’s Universal‘s very strange decision to embrace the outdated web applet that does not allow for circles to appear in its puzzles online (or in print for that matter). The other publishers have moved on to much smoother, streamlined applets (one of them even had pictures in its clues this week!), but the Universal that, per its website, “…sets the standard for all daily crosswords” asks its solvers to count letters and mentally circle them. This is a puzzle that is far better served with circles (I haven’t downloaded the version that is available in Across Lite from this website, but I’d venture to guess it features circles) I solved in the applet. Bummer. Why a puzzle is offering two different versions of its puzzle, and therefore two different solve experiences, is beyond me.

Universal publishes many circle-dependent themes. I get that they like them. Just like I’m sure many people who are lactose intolerant love ice cream. It’s just the end result is never quite what it should be.

Favorite thing about this puzzle was KANJI! That’s a fun new word for me that I’m happy to have in my vocab. Hope I see it again :) 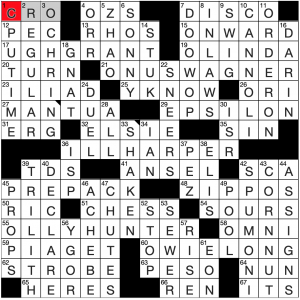 The title asks, “Is it cockney?” It probably isn’t, but it seems like it!

So are we all familiar with Hugh Grant, Honus Wagner, Hill Harper, Holly Hunter and Howie Long? Hill Harper, to me, is the least well known. (Actor likely best know for CSI:NY. Again, this is subjective!) Matt is a master at punny clues with these basically now nonsensical phrases. Not too hard to figure out, but definitely still a lively solve. Nicely done! 4.5 stars from me.

Another Jonesin’ next week! Time to see if Michigan can make the College Football Playoff in a few days! 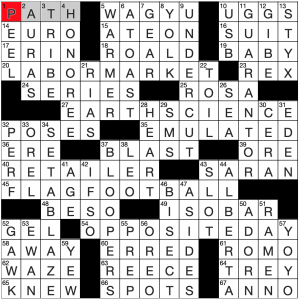 I had to do a double take on this puzzle on the theme. I think I overthought it at first!

So the key isn’t that anything is opposite anything else; it is simply that LABOR, EARTH and FLAG are all types of “days”. Only Labor Day is a true holiday that you get off work for, in most cases. But I am sure the USPS will add Flag & Earth Day soon! (Inside joke for delivery drivers!) So once we have the theme down, we can now plainly see we have a nice puzzle! I vaguely know this byline, but I have not done many by this person. Well done, John! 4.3 stars from me.

Sorry for the late posting, folks. I had written the following according to my usual routine, but I completely forgot to update the main post.

Theme: Words and phrases all with clues that are variations on the other half of the titular phrase. 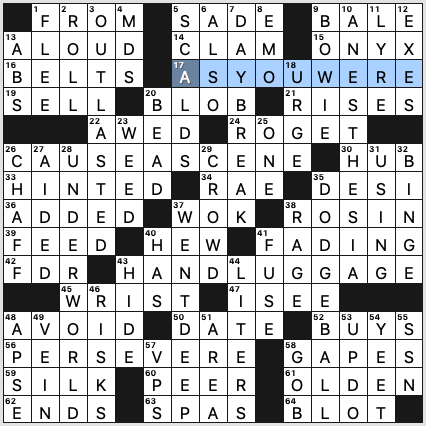 Nice. Funny that you never realize how many different ways the same phrase can be used depending on context and punctuation. I enjoyed this set.