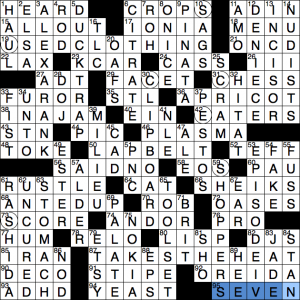 hello and welcome to episode #704 of matt gaffney’s weekly crossword contest, “Ghostwriter”. for this week 4 puzzle by a mysterious unknown constructor named Terry Fridman, the instructions tell us that the answer is a seven-letter word you might say when you get the meta. all right. what are the theme answers? i noticed fairly early on than many of the clues in this oversized (17×17) puzzle were two-word phrases with the initials T.F., like terry fridman:

these jumped out at me because all of them were difficult clues that took me multiple passes to solve; indeed, at first glance, some looked like spoonerisms to me—”fake tolls” or “fall tang” seem a little bit more like phrases than {Take foals} or {Tall fang}, since “tall” certainly isn’t an adjective i would use to describe an incisor. {Tight five} is probably the most saturday-level clue i have ever seen for FIST; it doesn’t even appear to make any sense as a two-word phrase until you see the answer. at any rate, clearly there was something highly constrained going on with these clues.

in addition, there were two other clues that were patently related to the meta:

T and F, in a context like this, certainly suggest true/false to me. but i didn’t know where to go with that, and this was as far as i got in my first sitting. but a couple of days later, i picked up the puzzle again and two clues jumped out at me:

i don’t know why i didn’t think of it before, but these two clues made it pretty obvious that the mysterious ghostwriter was, in fact… matt gaffney. [gasps of shock] matt’s affinity for chess is certainly well known to any longtime mgwcc solver, and he used to write chess columns for slate (like this one about the 2016 world championship and this one from 2013 suggesting that the world championship itself had outlived its usefulness).

anyway, once i had this realization, as glaring as it may have been, the next step suggested itself: instead of the fake initials T.F., we should substitute the real initials M.G. in each of those seven clues. lo and behold, doing so produces fourteen real words—and not only that, seven two-word phrases that form valid crossword clues to other entries in the grid:

circling the first letters of those answers and reading them off in the grid from top to bottom spells out SUCCESS, which is the meta answer.

this meta is really, really cool. the mechanism feels utterly novel to me—and yet it’s simple enough to wonder that it hasn’t been done before. i do wonder about “terry fridman” and why that was chosen from the universe of possible fake T.F. names. perhaps it’s an anagrammatic pseudonym? if it is, i don’t know what the anagram is—MARTYR FRIEND or DIRT FERRYMAN are the best i could come up with. i suppose that doing the initials trick again gives “merry gridman”, which is an interesting circumlocution for matt himself as the constructor.

whatever the reason, i loved this meta. it had everything you want in a week four: devious, elegant, and highly satisfying. each of the individual theme clues contained multiple ahas—one upon solving in the first time in the original crossword (as i said, none of theme were obvious fill-ins), another upon realizing it could be a new phrase when the correct initials were substituted, and a third upon actually find the answer to the new clue.

speaking of metas i like! registration is now open for the 2022 MIT mystery hunt, and i’ve been working hard this year as part of the writing team. if you’ve never tried out the mystery hunt, i encourage you to find some solving pals and form a team (or join an existing team).

that’s all for me this week! let’s hear from you in the comments—did you like this one as much as i did?

This entry was posted in Contests and tagged Matt Gaffney, Terry Fridman. Bookmark the permalink.