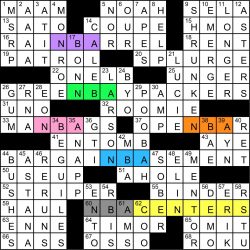 Hello there, all! Here is hoping you’re doing great and staying warm still!

Today’s grid has a hidden sports theme, and the players mentioned in the clue to the reveal, which is NBA CENTERS, might be considered out of place in today’s National Basketball Association given its rapid shift to positionless basketball (60A: [Patrick Ewing and Shaquille O’Neal…or an alternative puzzle title]). Then again, Ewing and Shaq are two of the greatest players in league history, so I’m sure they would have been great in any decade! Anyways, the letters “NBA” are embedded in each of the five other theme entries.

Trying to think of the devices in which you would need AAAA batteries, which I know I have never bought before, and I’m thinking something like pen lights (2D: [Tiny battery]). I’m sure frequency illusion is going to bite me at this moment, and I’m going to come across/buy something that will require quadruple As! European soccer first exposed me to ASTANA, as there’s a soccer team there (FC Astana) that once played in a European club competition a few years back, though that made me think that Astana was the current name of Kazakhstan’s capital (45A: [Former name of Nur-Sultan, capital of Kazakhstan]). Probably favorite fill of this beguiling grid-solving experience is BEGUILES (34D: [Charms by way of flattery]). I’m pretty sure all of you know that BYO stands for “bring your own,” which makes me think of the number of times that I’ve BYOB’d to a party, and I’m pretty sure that answer is zero (24D: [“Booze not provided” in events]). I’m not a teetotaler, but I know I’ve had long stretches without having booze. Whatever stretch that I’m on now will probably end before the end of the year since I’ve been working up a storm late and need to wind down pretty soon..and that might include a beer or red wine.

“Sports will make you smarter” moment of the day: ROOMIE (32A: [Expense-sharing house party]) – Was just doing some research on Chicago Bears running back and Pro Football Hall of Famer Gale Sayers, and came across an interesting fact about one of his former teammates, Brian Piccolo. As some know, Sayers and Piccolo were running backs for the team in the 1960s who ended up developing a close friendship before Piccolo died at age 26 from cancer. (Their relationship inspired the 1971 movie Brian’s Song.) I know that Piccolo was Sayers’ roomie on the road at one point, but did not know until know that they became the first interracial roommates in NFL history! 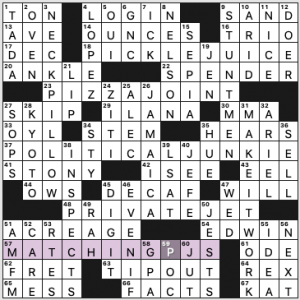 Fave fill: NECK PILLOW, JAMAICA, “MAKE IT WORK” (not that I knew the reference, 31d. [Iconic encouragement from Tim Gunn on “Project Runway”]).

Theme: Words that precede CODE. The revealer is CODE WORDS (62a, [Lexicon used by spies, and a key to the ends of the starred answers]). 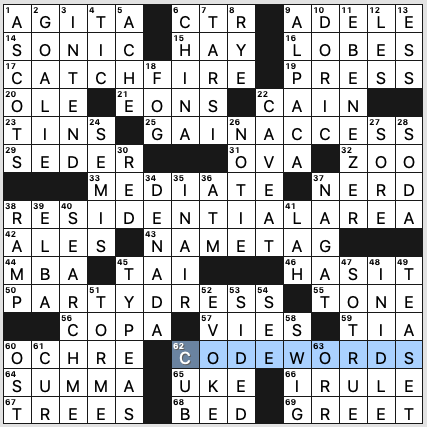 Fire code, access code, area code, dress code. Works for me. Similar to yesterday, this is another tried and true theme type, and it’s executed well.

A timely EBENEZER and a colloquial “SEARCH ME” top the fill. Also, NAMETAG, CAVEAT, and Bruno MEDIATE (pronounced me-dee-AH-tay), a guy I used to know in college.

Not so sure about TYPE A’S [Tightly wound individuals]. The pedant in me wants it to be TYPES A. Also, leading your grid off with uncommon AGITA isn’t such a fun start. Also also, HAS IT [Knows the answer] gets a raspberry from me.

Clue of note: 2d. [Man in a mask]. GOALIE. I gather the clue was built around alliteration, but I’d happily give that up to make it more inclusive—with [One in a mask], say.

THEME: Common phrases with the consecutive letters “O-R” in them are reimagined and parsed as a new phrase where it makes the word “OR.” 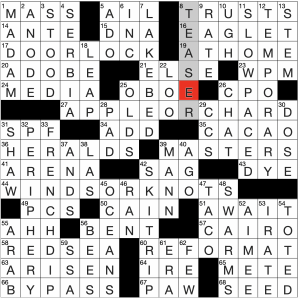 Some fun and clever wordplay today. APPLE ORCHARD / APPLE OR CHARD? and WINDSOR KNOTS / WINDS OR KNOTS? were definitely the standouts for me. REF OR MAT? feels a tad forced, as does DOOR LOCK/DO OR LOCK (both the base and the reparsing).

I had big trouble out of the gates, entering RIVER, AROSE, and RUSSIA where ANODE, STOOD, and SERBIA belonged (2D, 3D, and 4D). I can’t remember the last time I bungled that badly in a Universal, where, coincidentally, everything I entered seemed reasonable per the clue and was the correct number of letters. Puzzle felt tougher than usual in general in that sense. TEASER for [Magazine cover, essentially] was particularly tough for me.

A couple things gave me pause:

-The OR in a longer down entry TEMPORARY seems a bit inelegant in a theme like this, especially when that entry is longer than two of the themers.

-[Acronym on a poolside bottle] SPF. Is that an acronym? I thought acronyms made words. I call SPF an initialism.

Good to see AIMEE MANN. Anna Howard SHAW was new for me.

Nice Universal style DNA clue! [It’s hidden in “tooth and nail”]. It’s both in the phrase and in your teeth and nails. Nice! 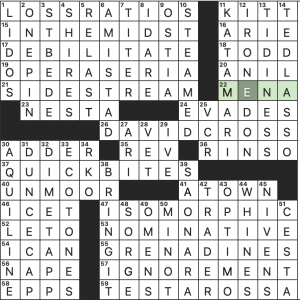 Full disclosure: I solved this while watching Psych 3 on Peacock! You don’t want to know how long this puzzle took me. And it was slightly hard to boot, especially without full concentration. Turns out I actually CANNOT multitask! Nice themeless edition this week, and TONS of Obscure Pop Culture refs in this one, and maybe just plain obscure stuff period! I told you it was a slightly tough one! Also proof that you can get away with a lot more daring entries (and clues!) in indie puzzles, which is what make them great! 4.4 stars from me. 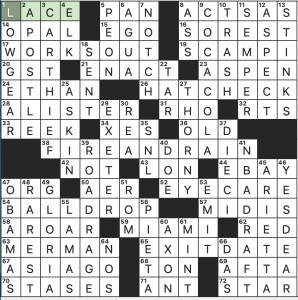 We have a revealer smack dab in the middle!

So we have fireworks and rain out; fire hat and rain check. You get the idea. It took me a minute to get it, but it is fairly simple. That says more about me than anything! Nice puzzle, Jeff. 4.5 stars from me for a smooth Tuesday puz.

I thoroughly enjoyed writing up this Tuesday’s puzzle as much as last week’s, and the common denominator is Brooke! I’m a fan and it’s so fun to see how the different collabs with others turn out. 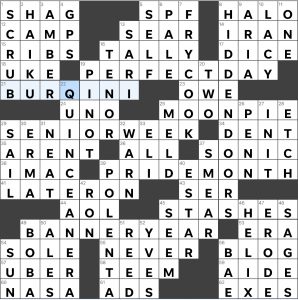 Theme: each themer ends with a unit of time

So much to love about today’s theme! First, it’s certainly a PERFECTDAY with such a great group of themers, increasing in duration with each one. Next up is SENIORWEEK, which I think of as a high school phenomenon as in college, senior year everyone seemed to just be trying to figure out what was next after graduation and where they were going. PRIDEMONTH is always a favorite time, especially here in Columbus, OH, with the excellent parade/march (complete with complimentary Jeni’s Splendid Ice Cream sample pints handed out along the route) that culminates in community festival and the Party in the Park. BANNERYEAR is a fun round out to this set of themers. In addition to the great set and fun themers of this theme, they also line up so nicely in the numbering: 19, 29, 39, and 49. So good!

Stumpers: SEEM (I was hung up on “seen”), SEAR (“burn” was my first instinct), and MELD (needed crossings, as “stir” was all that I could think of)

What a fantastic collab today from Brooke and Rebecca! Lots of other great clues, including ESTAR crossing SER as Spanish verbs and UNO and TWO used with clues that play off of each other, hinting at an entry in the other language (Spanish entry with an English clue and English entry with a Spanish clue). Also QUINCEANERA and HIDDENDOOR are fun bonus entries. We saw some last week on Tuesday from a collab between Brooke and Doug. I hope this bonus entires in the downs continues. Though the grids look more broken up visually, these bonuses really connect the puzzle in a subtle, off-set way.