This week we’re looking for a seven-word phrase that describes this crossword grid. There were three thematic long acrosses, each using the wrong time: 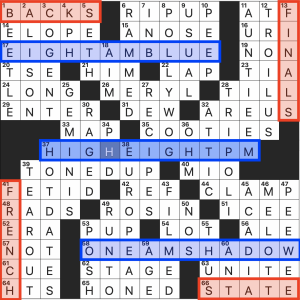 And there were also four symmetric entries in the corners, each missing “QUARTER”:

The first rabbit hole was obvious, but then what? In hindsight: my mistake was noting the long across times as +16 hours (and not -8). I kept trying meta-crosswordy tricks such as mapping numbers back to the grid. For example: 17a + 16 hours = 33, so check that grid square, etc. But we were looking for 7 words (not letters), and it’d be hard to cram that much meta-relevant content into a grid. I tried mapping numbers to the clues. I pondered the twin-relevant clue GEMINIS (mapping to “double” in the title). I calculated various numeric sequences: double, quarter, 16 (again, not 8). I counted doubled letters in the grid (ICEE and many friends). I re-read Act 4, Scene 1 of Macbeth.

I slept on it, and woke up with… nothing. My meta-solving odds drop considerably if I don’t find the solution by the next morning. My wife saw me staring at the grid Friday night and offered to give it a look. She doesn’t normally solve metas, but can sometimes look and spot the answer instantly. I showed her the grid, explained the missing quarters, the 16 hour (again, not 8) time discrepancies, walked towards my kitchen, and… BAM! Lightning struck: we’re missing four quarters, meaning we’re a dollar short. And we’re missing 48 hours… duh. It’s minus 8, not plus 16, so we’re missing one day. That leads to our contest solution A day late and a dollar short. Two problems, tying neatly to the title.

I really enjoyed this meta by our Merry Gridman. I’m sure some folks got it nearly instantly. I definitely did not, but I’m not complaining: the endorphin rush from “aha” moments like this never gets old. For folks who solved it: I’m curious to know how long it took you to spot the answer. Please let me know in the comments.

The FRENCH (QUARTER) is in the grid, so we’ll end with the song that’s been playing rent free in my head for the last few weeks: Jon Batiste’s I Need You.