Theme entries are phrases whose last word is of the form MA_A_A. 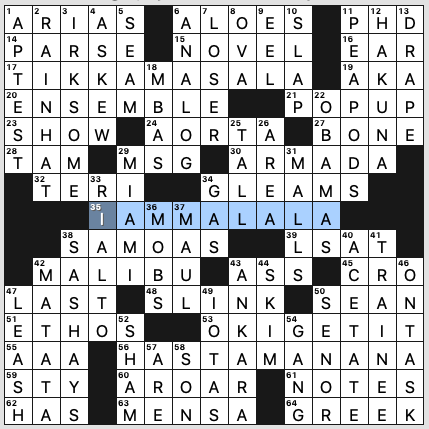 Wow, that was fun. It’s not just the serendipity that allowed Evan to fit these iconic phrases symmetrically in the grid. It’s also the beautiful surrounding fill (which I’ll get to momentarily). I don’t think I saw the title before the solve, but after I filled in the last theme entry, I glanced at it and laughed out loud. Perfect.

So how ’bout that fill, eh? Top entry has got to be “OK, I GET IT,” but there’s nice stuff everywhere: ENSEMBLE, PEAPODS, SASHAYS, RAIN HAT, ON TASK, ANKARA. I also like the Ñ crossing in SEÑOR and MAÑANA. Nice touch. The only IRKSOME nit I’ll note is AROAR (which I’ve put in a grid myself) since it comes up in crosswords way more often than in real life. 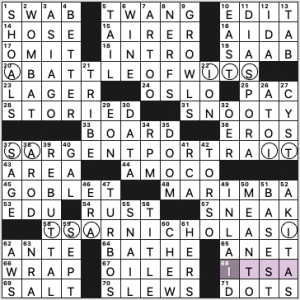 Unusual placement of the theme bits here. The two-part revealer is IT’S A / WRAP, with ITSA at the right edge of the grid “wrapping around” to the other side where WRAP is. The circled letters in the other three themers “wrap” ITSA in three different ways: ITS at the end and A at the start, IT/SA, and I/TSA. Here are the wrappies:

Theme’s okay, I didn’t love it. 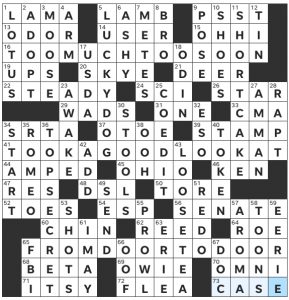 Somewhere out there, there is someone solving this puzzle on their 60th birthday, and that person is about to solve the most apt puzzle there is. In all serious, this is a fun theme and I like all the answers, particularly TOO MUCH TOO SOON. I got lucky that the clue for FROM DOOR TO DOOR had the word “go” in it, because my brain really wanted that answer to be “go door to door” (which still has the right number of O’s!), but this one works just as well. It would have been really cool if there were no other O’s anywhere in the puzzle, but with USA Today’s fill standards I’m not sure that would have been feasible.

Speaking of fill! Because there are only three theme answers, there is a lot of space for other long entries in the down direction. SHORTCAKE, LOOSE TEA, and TOP SECRET were favorites (although I’m a little mad at top secret because I typed it in wrong and then had to spend the last minute of my solve time looking for an error). Is LUCKY DOG a thing? I only know of a different animal, the “lucky duck”. I enjoyed that we have both EERIE and ERIE in the puzzle (and I’m claiming the clue of [Like a loon call] as a Minnesota reference), and I loved the clues for POSE (r.i.p) [TV show featuring the House of Evangelista] and OHIO [State where Halle Berry was born]. But due to personal bias I gotta give a shoutout to 24a [Comp ___ major] for SCI as my favorite thing here. 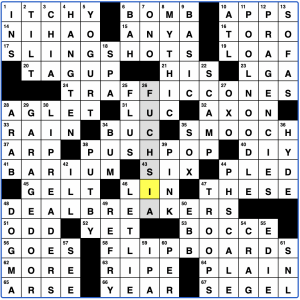 The AVCXpansion is 70% of the way to its goal of a second weekly puzzle, midis, a cryptic, and more.  Find out more details and contribute if interested here!

Adam Wagner has a guest puzzle this week.  It’s definitely matching the 2/5 difficulty suggested, and I found the theme charming:

All phrases whose first word can be used as a synonym for “sell”, changing the meaning of the overall phrase.  Again, it’s not the most difficult theme, but it’s well done.

Other nice fill: It’s all about the down clues this week – we’ve got some lovely long fill like POOL NOODLE and PR AGENCIES up top, and GARAGE DOOR and LIP READERS along the bottom, FUCHSIA (which I managed to completely mangle the spelling of my first time through), HANG TEN (“Curl all one’s toes over the edge, as a surfer might”), and PH SCALE (“System in which coffee is a 5 and milk is a 6”). 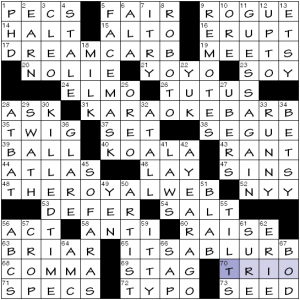 Simply: the letter B is suffixed to familiar phrases for wacky results.

These are merely okay, neither too far-fetched nor too amusing. 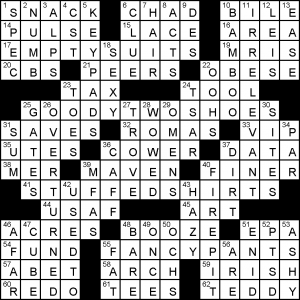 Ed Beckert’s theme today is so beautiful in its simplicity. Each of four theme entries is an idiomatic phrase, each an example of clothes being used to describe their wearers using synechdoche. So we have EMPTYSUITS, a GOODYTWOSHOES (don’t drink, don’t smoke!), STUFFEDSHIRTS and a FANCYPANTS.

The grid design is quite conservative, being compartmentalized into several smaller sections. I think this design choice is often prudent, and helps the puzzle from having too many difficult entries. The only oddity for me was CAFF. I’ve heard British people pronounce CAFE like that, but didn’t think they’d spell it how they said it! 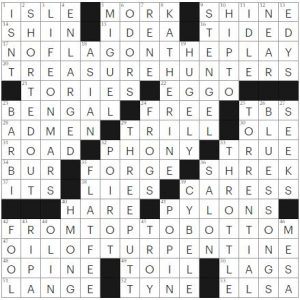 How about this grid from Patrick Berry today? Stacked 15s with some long crossers in each half of the grid. Some sacrifice in connectivity, but I enjoyed myself.

I’m glad to see sports content that isn’t warmed-over crosswordese — sports are a big part of society and deserve to be represented in our grids. Here, we’ve got NO FLAG ON THE PLAY (17a- “There wasn’t a penalty,” from a football referee), Yankees great Casey STENGEL (9d- Only M.L.B. manager to win five consecutive World Series), and the golf term THREE PUTT (29d- Tubrn a birdie opportunity into a bogey, say). I also fell for a trap at 31A, where (One taken on a drive) is ROAD, not “wood.”

FROM TOP TO BOTTOM (42a- Thoroughly) joins NO FLAG ON THE PLAY as a highlight from the 15s, while TREASURE HUNTERS and OIL OF TURPENTINE were less exciting to me, but plenty solid.

As clues go, I particularly liked (Washing-up place?) for ISLE, and all the moreso that it provided a bit of resistance and aha moment at 1A.

Nothing for notes, other than the outstanding Suni Lee [(56d- Ethnic group to which American Olympic gymnast Sunisa Lee belongs) HMONG]