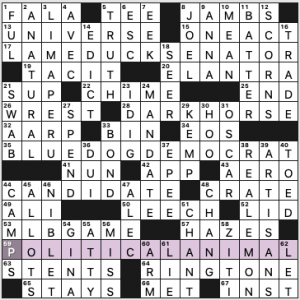 I’m not sure why the puzzle’s title is gendered, as “beast of a man” doesn’t feel like a compelling enough familiar phrase to outweigh the maleness. When underrepresentation of women in US politics is a chronic problem, painting all politicians as men doesn’t help remedy things. Peter could have put “Political Animal” in the title slot and had a 15/9/9/15 theme set.

Revealer is 59a. [Man, according to Aristotle (or how 17-, 28-/44-, or 35-Across could be described)], POLITICAL ANIMAL. The three theme phrases describe politicians and include the name of an animal:

Most mystifying clue: 60d. [Puller’s pride], ARM. Peter notes on the solution page that puller is slang for an arm wrestler, and I can’t imagine more than 1% of solvers might know that. Unfortunate to require sports knowledge to confirm that last letter: 66a. [David Wright, throughout his career]. MET and ARM seemed more likely than NET/JET/ARN/ARJ, but still. There are a zillion non-name-dependent ways to clue MET.

Theme clues don’t match the theme answers, but they do match everything inside the theme answer aside from the outer B–ED. The revealer is TUCKED IN BED (57a, [Put to rest, or what the answers to the clues at 17-, 23-, 37- and 49-Across are]). 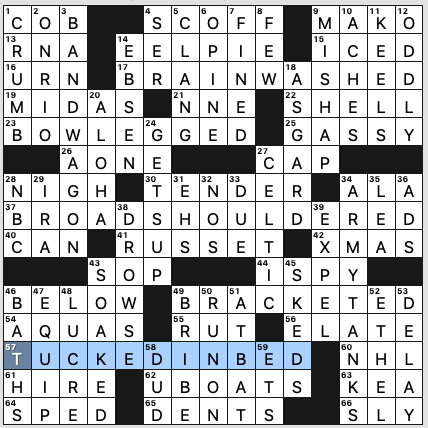 That’s cute. It would have been nice if all the interior phrases were solidly in-the-language. I’m looking at ROAD SHOULDER, which feels sort of green painty, since most people would just say “shoulder.” But it’s close enough for me. I didn’t love this theme (using past tense verbs like BRACKETED to make your bed (haha) feels a little bit like a cheat), but it’s a nice idea.

BANDWAGON is a great fill entry, but its opposite number, ARMY TANKS, definitely feels green painty. However, I do like RUSSET apples, CELTIC, and EEL PIE (as an entry, not as an entree). 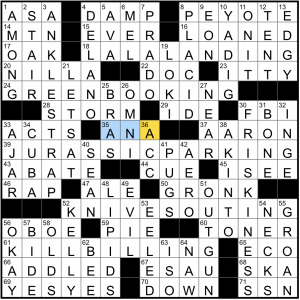 The grid on today’s NYT wasn’t as kooky/playing with structure as I tend to expect from the Thursday puzzle, but the cluing was definitely trickier than usual, so it all evens out:

It’s movies that suggest different plots when you add an extra “ING” to the end.  “KNIVES OUTING” was the first one I spotted and my favorite.

KELLY Clarkson is clued as having “the 2004 hit “Since U Been Gone”, but she’s also amazing at ANYTHING she covers as part of her talk show.

Editor: Amanda Rafkin
Theme: Each theme answer is two words, each beginning with the letters SO. 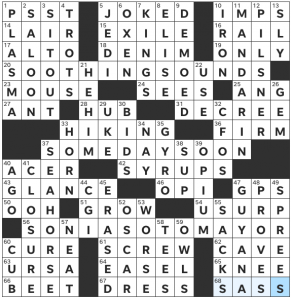 It’s a neat trick by Enrique to name his puzzle what he wants people to say about it… but hey, I agree! Three great theme answers here, all fun phrases and none feel forces into the theme. I always forget whether SONIA SOTOMAYOR spells her first name with an I or a Y, and have to write it over every time. As a kid, I invented the word “soonday”, for when I wanted confirmation from a parent that we were actually going to do what I wanted at a near point in the future, so SOMEDAY SOON made me smile thinking of that.

I’m a few hours post booster shot, so forgive me if this recap is both shorter/loopier than normal. My bullet point thoughts on other things that jumped out at me in this puzzle:

That’s all from me! Go get vaccinated/boosted!

This appears to be a debut for Hanh! Congrats!

THEME: The word HINT is “dropped” from phrases and can be found in intersecting down entries. 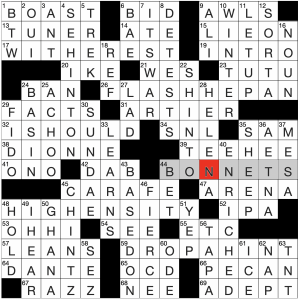 Loved this puzzle! So much fun. It revealed itself perfectly for me as I tried to make the connection between the themers. In the first one I noticed that INT was missing, of course. By the second I saw that INT was going down. With the third, I was able to use that synergy in order to fill in CHINTZ (which was new for me) and HIGH INTENSITY. And then a great AHA moment with the revealer. Very, very well done.  Fantastic debut puzzle!

I like when Universal occasionally runs out-of-the-norm concepts. They always keep them accessible to solvers at any lever. What makes this most impressive is that there is a lot of strain on the puzzle with there being 7 theme related entries, yet it’s fairly clean.

Odd that there’s another INT non-related down answer in WINTER :)

This was great, Hanh. Congrats 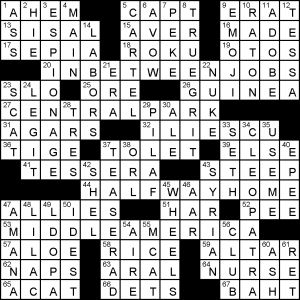 Theme: Each theme answer in this puzzle contains a sickly action that sounds like a common phrase. 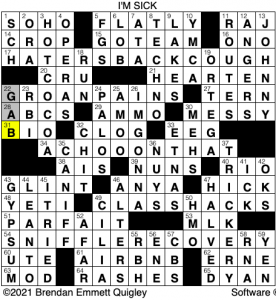 Per his constructor’s notes, BEQ is sick (feel better!!), and that clearly influenced his theme choice. I usually struggle with adapted phrases like these, but I got most of them right away. HATERS BACK COUGH was the one I struggled with the most, but after saying it out loud a few times, I was good to go.

‘Tis the season for illness, as it gets colder, but I hope everyone feels alright and stays healthy for the holidays!