Title: “Can You Make the Time?”
Prompt: The meta for this puzzle is a hit from the ’70s.
Answer: “Operator” by Jim Croce (not to be confused with Tim Croce) 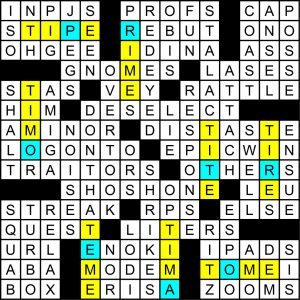 I did it! Not gonna lie, it feels great — for the first time since 2015, I’ve gone 12-for-12 on the Muller Monthly Music Meta. Dude was unstumpable! Huzzah.

Pete had stated that November’s meta was the toughest of the year, so I had just assumed that I’d get December’s and finish perfect. But then I checked the number of correct entries on Saturday evening as I sat down to solve, and — uh-oh, only around 140. So definitely missable, and I needed to focus to bring this ship into port.

Copy and paste from many previous reviews: with no obvious theme entries, this appears to be (and ultimately turned out to be)
a classic Mullerian meta, where you stare and probe until you see the pattern hidden therein.

Looking around for suspicious entries I noticed ESPOO in the bottom-right, clued as [Finnish city that sounds like a Spaniard introducing a famous poet]. That approximates “ess-PO”, as in Edgar Allan Poe, and that is in fact how the city is pronounced by Finns (I visited Espoo in 1993 — it’s part of greater Helsinki). So anyway, figured something themey was up in that corner, but what exactly?

I could find no other toeholds in the grid. It all seemed pretty clean and pretty wide-open, so I had to look for a different path to uncover its secrets.

When in doubt, look at the title. “Can You Make the Time?” Well, can I? I didn’t see any time-related references among entries, but I wondered if the title could be taken literally and that we are actually to make the word TIME?

Aha! Everywhere I looked now, I saw a 4-letter sequence in the grid that was TIME with one letter changed. Adrenaline rush! There were so many that I felt this had to be the right path. Once I circled all 8 of them (and saw that they were in symmetrically-placed entries), I knew this had to be it. They are:

Take the letter changed from TIME in each of these eight, taken from left-to-right order in the grid, and spell out the very ’70s hit by Jim Croce, “Operator”:

I liked this one quite a lot. Under 200 right answers so quite tough, but so very simple. Certainly a SAD (Simple And Difficult) meta, with just one key insight needed, but its single leap is both subtle and logical. Just enough hints but no more, which is the sweet spot Pete so often finds.

So Year 10 of the Muller Music Meta is in the books, and I’m hoping we’ll get an 11th? He certainly hasn’t run out of ideas, as the past two metas especially have shown. Congratulations to Pete on a decade of these beauties, which have been a major highlight of the American crossword puzzle scene over the past 10 years. On a personal note, Pete’s work has been both inspirational and motivational to me over this period as well. So fingers crossed that “these goes to 11 (years)” and beyond!