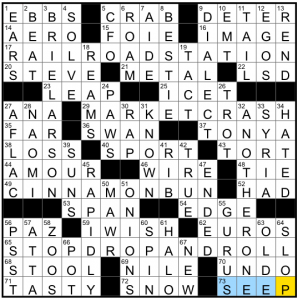 I talked to my mom (who had already solved this puzzle) right before I did it myself, and she wondered if I was “old enough to understand the revealer”. Well, I don’t know what they’re teaching kids now, but as an elementary schooler in the mid 2000’s, STOP DROP AND ROLL was a constantly repeated phrase. I’ve never imagined seeing it as a revealer though! I enjoy that this puzzle finds a new way to bring together phrases other than “they all start/end with [things in the same category]” – this is not in any way a knock to that type of puzzle, but stepping away from that formula made this crossword feel fresh. MARKET CRASH feels like the stretchiest theme answer to me as the other two phrases can be more closely substituted by “stop” and “roll”. I’m not sure what a better option would be, though. And now I want CINNAMON BUNS :(.

Congrats to Tomas on a great NYT debut! Happy Monday everyone! 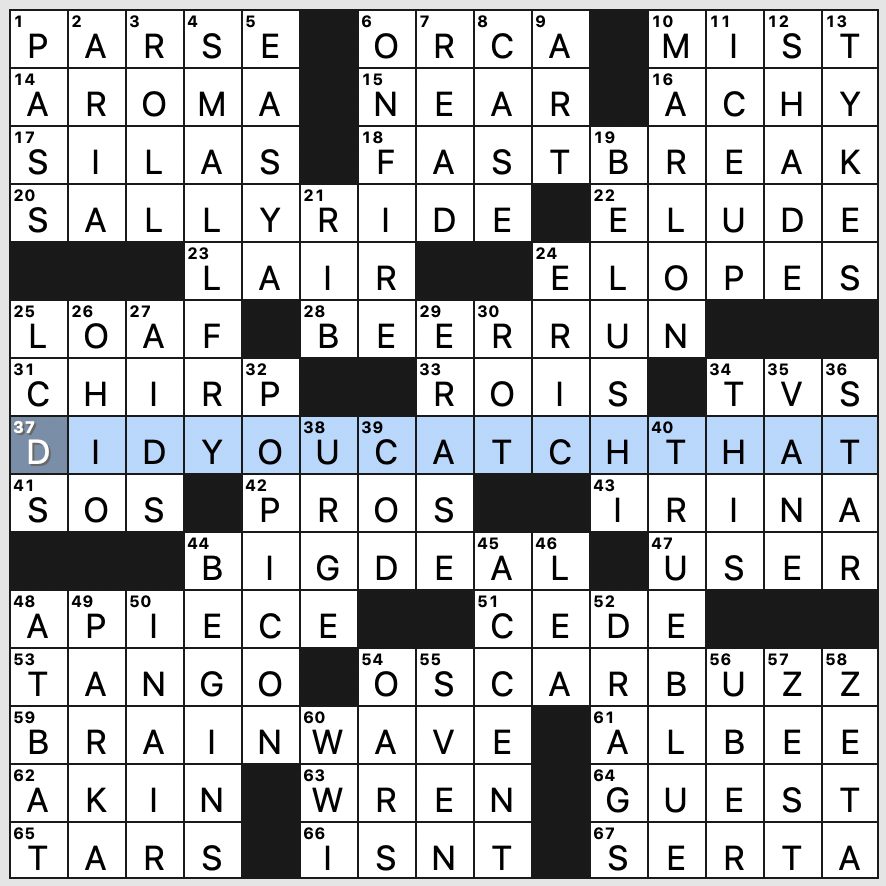 An enjoyable theme. I’m not sure I’ve heard “catch a buzz” very much, but it checks out. Maybe it’s a regional thing. But I like the lively and interesting choices of entries, especially SALLY RIDE.

Today I Learned: Though she was married to fellow astronaut Steven Hawley while at NASA, later in life SALLY RIDE had a long-term relationship with professional women’s tennis player Tam O’Shaugnessy. Ride is therefore the first astronaut to be recognized as LGBT.

Clue of note: 4d. [Young kids]. SMALL FRY. Not sure I’d clue it as a plural. Usually I hear it as a not-necessarily-unkind nickname. 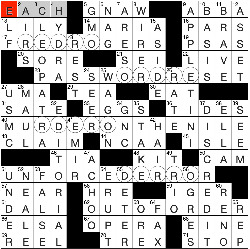 The revealer at 62A [Like a nonfunctioning vending machine, or what the circled letters are, in two ways] is OUT OF ORDER. The revealer clue is pretty long, but IMO the “two ways” bit is necessary to really make this theme airtight. See, what’s going on is that the circled letters are “out of order,” in that they come OUT of the word ORDER. And in each case the letters are OUT OF ORDER; that is, they appear in a different order than in the word ORDER.

This is a pretty smooth debut, with the exception of Robert IGER — IMO it’s about time we retired him from puzzles, since he quit the Disney CEO post nearly 2 years ago. (This puzzle was probably accepted many moons ago, so I’d call that more on the editing than on the constructing; maybe an attempt was made to refill the bottom right corner and if not, I think it would have been a good idea to try.) 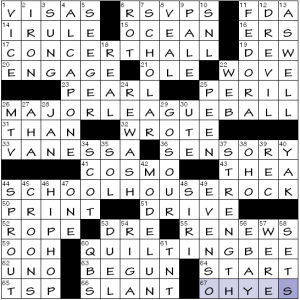 Theme: The first word of each theme answer can come before the word “play” 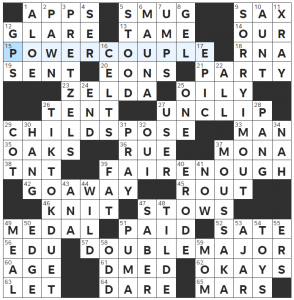 Good morning everyone! The long down answers in this puzzle were awesome. TIK TOK DUET (split-screen social media video) could be the seed for a themeless puzzle easily, and PRETZELS, MOUSSAKA, and SORRY IM OUT were also great. I like that there were food items in symmetrical slots. More notes on this pretty, symmetrical grid below: 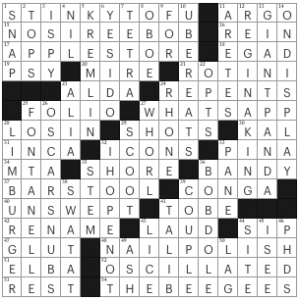 First, let me say I’m perplexed as to why two readers hit this puzzle with a 1-star rating and one gave it 1.5 stars. Are they that upset about ARETES showing up in the grid? Are they resentful about not knowing all the answers? Did some crossings vex them? Do they have it in for the constructor? I just don’t get it. I think it’s a 4.25-star puzzle.

Fave fill: STINKY TOFU (don’t really know it, but the clue points the way to each half), “NO SIREE, BOB,” APPLE STORE, WHATSAPP, NAIL POLISH, THE BEE GEES, LIMBURGER (our second smelly food!), FONTANELLE (doesn’t that word look like it should mean something pretty rather than the soft spot atop of baby’s head?), OSCAR SNUBS, KREMLIN, UBER EATS, the late BOB DOLE, REGINA KING, and GIANT PANDA ([Big fan of shoots], and Kam’s not referring to movie shoots here). Lots of good stuff! 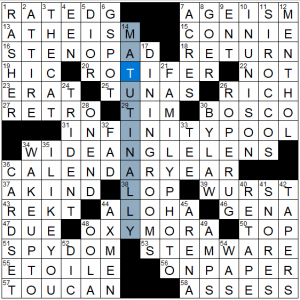 I enjoyed myself for much of today’s puzzle from BEQ — it’s nearly one of my favorite puzzles of his in the past year. We’ve got intersecting stagger stacks, with particularly juicy entries in the acrosses: INFINITY POOL, WIDE ANGLE LENS, and CALENDAR YEAR and wide-open corners.

The cluing was particularly up my alley today: (Belief you’re not being watched) at 13A for ATHEISM tickled me in just the right way, and (Places where you might find home plates) and (It’s all relatives) for DINING ROOMS and FAMILY PHOTO in the downward stagger stack are in a sweet spot of overt, but not too overt, misdirection.

For all the positives, though, I’ll remember this puzzle for two squares. First, the crossing of OXYMORA (48a- Awfully good and bittersweet, e.g.) and AMPS (49d- Spoon boxes). If I had more readily recognized “Spoon” as a band, it might have been no problem, but the rare-but-technically-not-wrong-I-guess plural OXYMORA stymied me, because you know, we’re in English and not Greek, and “oxymorons” is something I’ve actually seen and heard before.

Even more difficult was the 14D/20A crossing of two words I’d not seen before. It’s not a Natick – there aren’t too many letters that could work, but MATUTINALLY (14d- Tending to happen early in the day) and ROTIFER (20a- Microscopic aquatic invertebrate) is a tough crossing. I can see the relation to French matin in the former, but had no help sussing out a root word for ROTIFER (it’s rot- ~ “wheel”, as these creatures are also known as “wheel animals”) from the clue.

No notes today, since I’m late enough as it is.