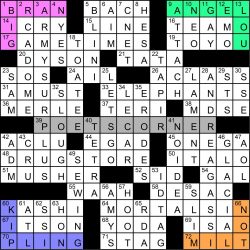 Hello there, everybody! The Christmas lights are all over, and here is hoping that you all are ready for the holiday madness that is to come.

How about some poetry to start off your crossword-solving experience on Tuesday? Well, we have that in a way in this grid, where the across and down answers that make up the four corners of the grid, which contain bubbles, spell out four different poets,, with POETS’ CORNER acting as the reveal (39A: [Westminster Abbey area…and a hint to finding the puzzle theme (look for Khalil, Maya, John and Rudyard!).

How about a couple of 11-letter non-themed entries to liven up the grid even more! That’s what we have, and both delivered, starting with ARMY SURPLUS (3D: [Outlet inventory that includes field jackets and camouflage pants]). Have only been to that type of store twice, and both when when someone I was accompanying stopped by and I walked in with them. Does anyone have any stories of a memorable purchase when going into an army surplus? I just attended the Army-Navy game this past Saturday, and I’m wondering if I can find this somewhere on aisle two… 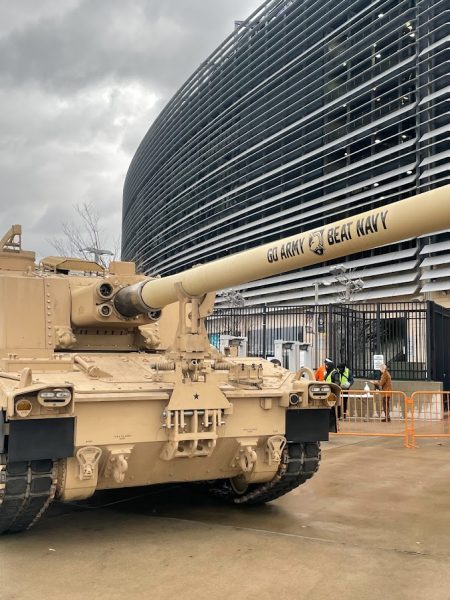 Also fascinated by SLOUGH, mostly because of the hard-to-track pronunciations of those Old English/Middle English words that end with “-ough” (32D: [Shed, with “off”]). That word is pronounced like “sluff,” but then that same word can be pronounced “slew,” then there’s trough (pronounced like “trawf”) and, about four years ago, saw a quarterback who eventually made it to the NFL, David Blough, play college football at Purdue and heard that the pronunciation of his last name is like “blau.” My head is hurting after typing that. Let’s move on to the other 11-letter entry in the grid!

“Sports will make you smarter” moment of the day: ANDRE AGASSI (32A: [Tennis great who penned the memoir “Open”]) – One of the great stories that Andre Agassi has told after his playing career ended is about the way he was able to gain advantage when playing fellow tennis legend and contemporary Boris Becker. Becker had one of the biggest serves in the game at the time, but Agassi, arguably the greatest returner of serve the game has ever seen, claimed to know where Becker’s serves were going, to the point where, according to Agassi, Becker asked him how he was so good at reading his serves. Only after their playing careers ended was when Agassi let Becker in on the secret; Agassi was able to figure out that Becker stuck out his tongue out right as he was ready to serve, and when Becker’s tongue was in the middle of his lip, the serve was going  down the T or a body serve, but out wide when Becker’s tongue stuck out to the left corner of his lip.

So did finding out that tic work? Well, Becker won the first three matches against the two, but then Agassi won 10 of their last 11 head-to-head matchups before they retired. How about that?!?

The revealer is FOOT BRIDGES (59a, [Pedestrians’ spans, and a description of the circled words]). The other theme answers are familiar phrases that feature a part of the foot which “bridges” two words. 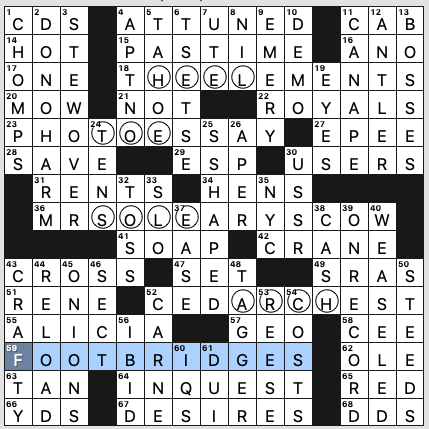 It’s not hard to see what’s going on with this theme as you make your way down the grid, but it’s still nice to come across a revealer that is a bit unexpected but perfectly apt. I enjoyed that little moment during the solve.

I further enjoyed the stacks in the corners of the grid (DO NO HARM / STEW OVER and ON RECORD / WEASELED) plus interesting words PASTIME, INQUEST, and CANAPE. I’m not so keen on the long abbreviation APT NO and word-no-one-uses APER. 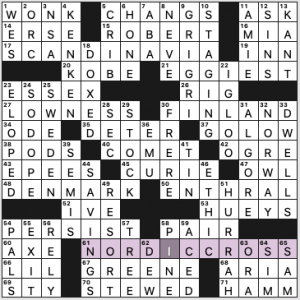 We’ve got two revealers, sort of. 17a. [Northern European region] is SCANDINAVIA and 61a. [Flag symbol seen twice in this puzzle’s grid] is NORDIC CROSS … though the upper cross made out of black squares is backwards and not in flag orientation. There are four Nordic countries as themers, clued via the color of their flag’s NORDIC CROSS: SWEDEN and NORWAY, not symmetrically paired in the grid, and FINLAND and NORWAY. Iceland also has a Nordic cross flag (it’s red and white), but was not invited to the party. Wasn’t aware that this flag design was called the Nordic cross; that’s not common knowledge, is it? Theme is OK, but the shortcomings bug me.

Things posing trouble for Tuesday newbies: crosswordese [Gaelic language], ERSE; British variant spelling ENTHRAL (never seen it in my life); niche trade-name [Climber’s belaying device], GRIGRI. Italian ORA is also not likely in everyone’s vocab. “SO DOPE” also feels a bit weird to me as a crossword entry. I did like launching with WONK at 1-Across, though, and its crossing KENKEN. Glaring dupe: LOWNESS (not a common form of the root word) one row away from GO LOW. 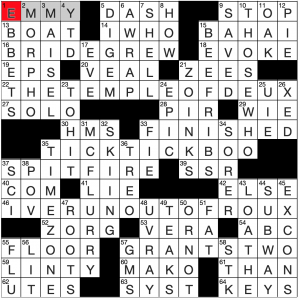 I keep forgetting to start my timer with this puzzle! As is the case in the phrase “pre-zoo”, we have phrases with the ending “mm” sound deleted, and with Matt’s trademark clueing, hilarity ensues!

Matt, as always, makes me laugh! Not too difficult a solve this week, but my funny bone is now sore! 4.4 stars from me. 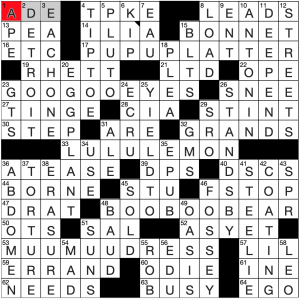 I hope I spelled/hyphenated everything correctly; I am doing this by memory! Nice execution of a relatively simple idea, but slightly updated with the central entry, which surely wasn’t around the first few times this theme was attempted. Smooth solve, but that is what we want on a Tuesday! 4.3 stars from me.

Everyone have a safe and healthy week! I am not following my own advice, as I am home sick myself today! 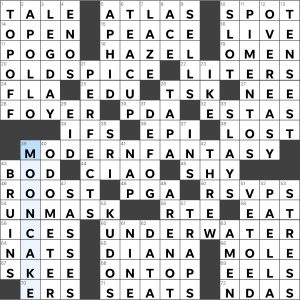 Theme: ”world” can be added to each portion of the themer as a stand alone term; thus the themers are formed “when worlds collide”

Let’s make some worlds! Each themer contains two words so when “world” is added to the end of each, it makes various world:
OLDSPICE becomes OLD World and SPICE World
MODERNFANTASY makes MODERN World and FANTASY World
UNDERWATER splits into UNDER World and WATER World

Stumpers: BRUINS (needed all of the crossings), TENSEST (wanted “tightest” to work), and ONTOP (needed a couple of crossings)

For the first two thirds, I blazed through this puzzle but then slowed down at the halfway point and got held up in the final third (southern portion). Usually I work through acrosses then proceed to downs as needed. The downs helped me break into that final third and switching between acrosses and downs, I slowly completed the rest. Lately I’ve been solving quicker and when I began, I though it might be a quick time today but with that slow down, it wasn’t the case today. Still a great puzzle!

h/t to Sally and her blog post today for helping me figure out today’s theme, which also has insightful notes from the constructors if you want to know more about the creation of this puzzle as well as the other themers considered for this set.

It was a pretty good day today, but the best part of it by far was my Period 9 class. Actually, I don’t have a class Period 9. I have students who just come to my room who don’t want to be in their study halls. It’s an unofficial Geeks and Misfits Club.

Today, I went to solve Paul’s Universal and it was projected on the screen. A clue caught a kid’s eye and he shouted out the answer and I entered it. Then another kid. Then another. And pretty soon, it was a four-student effort. They filled in the whole thing with NO help from me, or the internet. And the many AHA moments were fantastic.

But the REAL kicker was when they figured out the theme (which, I’ll admit, they needed a nudge on). I saw four light bulbs go off simultaneously. Followed by four blown minds.

No, none of us had heard of BORDER TERRIERs (we’ve all heard of the Collies, which if pluralized is the same number of letters as TERRIER! A tad curious as to why Paul snubbed the COLLIES), but it was even fun to google up some TERRIER types until we found the one that fit the theme. And SET YOUR TEETH ON EDGE isn’t all that familiar to this group of high school seniors either. It only rings a faint bell for me.

But when all is said and done, four students at the same time said “Can we do another?” and that’s amazing, Paul. Congrats. Coming from someone who tries to hook kids on these constantly, it is a true feat to hook four at once (and then we solved today’s NY Times… which they also enjoyed…. I won’t say whose they liked better, but the constructor’s name rhymes with “Tall Molter”).

I was so excited to write about that, I forgot to explain the theme.

THEME: Phrases that are missing a synonym for “Boundary” (but the literal boundary of the puzzle is there instead) 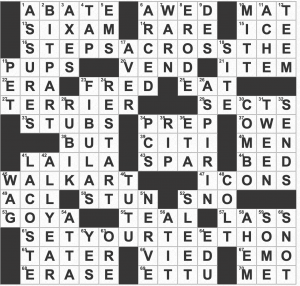 You just created four lifelong solvers, Paul. And a guarantee that they will be in my room to solve on a daily basis. Usually I solve during my study hall duty period 2… I didn’t get around to it today, and period 9 will have to be the new normal.