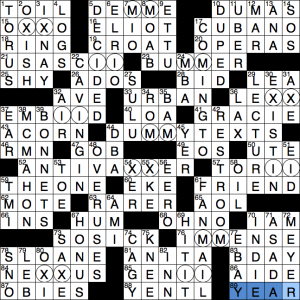 hello and welcome to episode #706 of matt gaffney’s weekly crossword contest, “Happy Early New Year!”. for this week 2 puzzle, the instructions tell us that we’re looking for a 12-letter activity. what are the theme answers? the only obvious one in the grid is the last across answer: {The forthcoming new one is found four times herein} YEAR. this mildly dupes the title, but that didn’t really bother me. anyway, what does it mean? well, with years in crossword puzzles, you always have to be looking out for roman numerals, and next year is 2022, or MMXXII. that’s interesting already. now, MMXXII together isn’t anywhere in the grid, let alone appearing four times, but MM, XX, and II appear four times each, in the correct order:

as far as i can tell, that’s the theme—MM followed by XX followed by II, four times. it’s quite noticeable because even though MM is a fairly common bigram in english, both XX and II are quite unusual (the former more so, of course). now, twelve theme answers is a lot even if many of them are short, so it’s a 17×17 grid—but i do think that’s the entire theme. which leaves us… where, exactly?

honestly, i don’t know. it took me under a minute to think of the term DOUBLE-DATING, which is kind of a punny explanation of the theme, in the sense that specifying the year is part of a date and MMXXII comprises only double-letters. i have very little confidence that that’s the right answer, though. it feels appropriate and it fits the instructions (12-letter activity), but there’s not such a strong “click”. i am planning to submit it, but i don’t know why it’s any more apt than something like, i dunno, MIXED DOUBLES, which is also a 12-letter activity that uses M, X, I, double-letters, and mixing (anagramming).

what i’m hoping is that i missed something in the puzzle that confirms DOUBLE-DATING (or, indeed, some other answer). what i’m fearing is that there isn’t anything, and we were supposed to just guess it… which, even though i am indeed just guessing it, is not very satisfying. i guess we’ll see.

while we’re here, though, i will point out that in addition to three of the four XX answers being total unknowns to me and the fourth a BUMMER, the down answers that crossed those XX themers were pretty creaky. OXISH, EXIST IN, XKE, OXI, and SAXE were not my favorite fill answers. the rest of the grid was mostly pretty fun to work through.

that’s all i have this week. i do hope i did indeed miss something and that somebody will let me know about it in the comments!