Theme: Each theme answer begins with a word meaning “to sew” 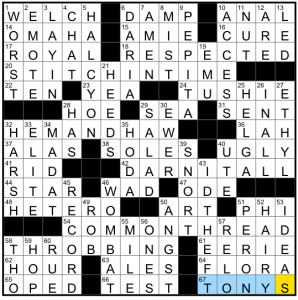 First and foremost, congrats to Anne on her New York Times debut! I enjoyed today’s puzzle, despite being one of the least-crafty people on the planet – I don’t think I’ve sewed anything myself since elementary school. I enjoyed how Anne chose theme answers that obscured the sewing related meaning of their first word, although I always thought STITCH IN TIME, in the proverb, was sewing related? So I didn’t like that answer quite as much as the others; perhaps there could have been some sort of reference to Stitch from “Lilo and Stitch” to further change the meaning of the word. The theme answers are all three words long, too – another nice COMMON THREAD.

Fun grid design today! I love the crosses in the middle of the puzzle – thematically, they give me big cross-stitch vibes. I also liked that the layout allowed some extra long across answers, although neither RESPECTED or THROBBING totally blew me away as answers – in fact, my favorite answers today were PEPITA and WOMBAT, two bits of shorter fill! Some people don’t like having bonus answers that are the same length or longer as theme answers, as RESPECTED/THROBBING/HEM AND HAW/DARN IT ALL are today, but I personally don’t mind it at all, especially when the revealer makes it incredibly clear what answers are theme answers.

Theme: KEEP IT PG (63a, [“Tone down that PDA, there are kids around,” and a hint to five answers in this puzzle]). Those five answers are two-word phrases with initial letters P.G. 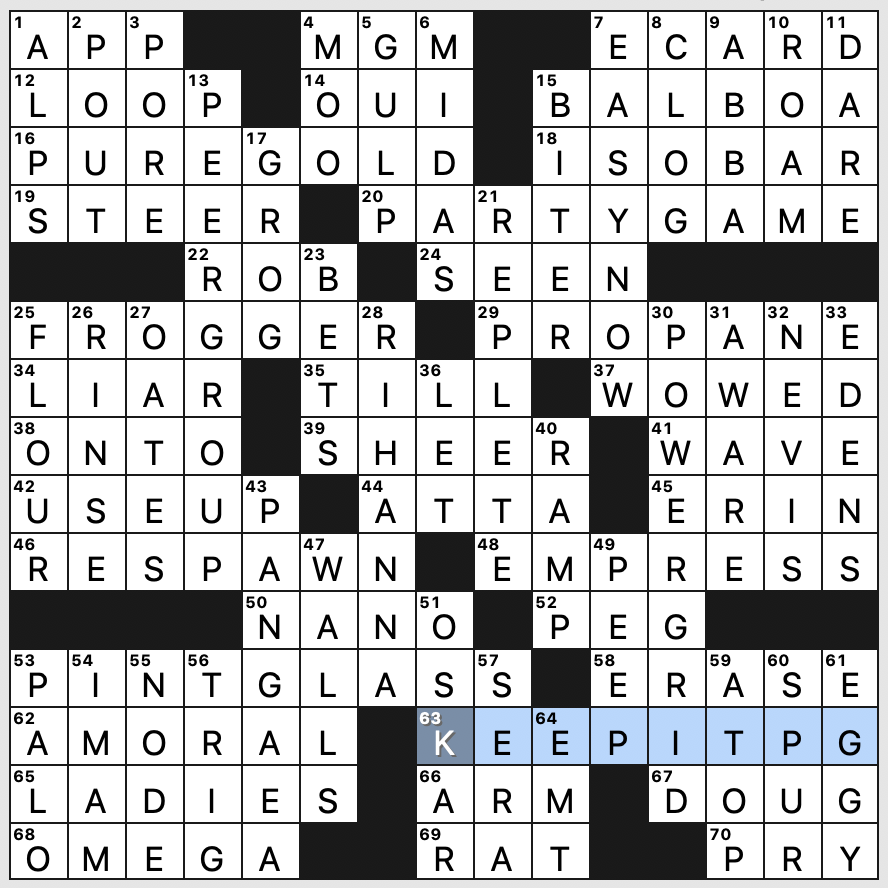 A fine set, but not the tightest of themes. There are loads of other PG phrases (pea green, Persian Gulf, poison gas, plate glass, pearly gates, etc.). Certainly one could come up with 13 which is where I thought this theme was going at first (PG-13). (Probably too ambitious for a 15x grid, tho.) Evan’s a constructor with high standards and usually multi-layered themes, so if there’s something I’m missing here, feel free to let me know.

On the other hand, it is a Monday grid, and this one seems perfectly aimed at newer solvers.

The fill is clean as you’d expect with niceties “EASY, NOW,” PANGAEA, FROGGER, RIHANNA, and BALBOA. I needed most of the crossings for NEVIS [Island southeast of St. Kitts], but they were certainly fair.

Clues are mostly straight as an arrow, reinforcing the idea that this a good grid for the new solver in your life. 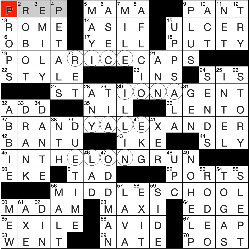 This theme is education-centric. See what I did there? You will. The revealer, 56A [Junior high … and what each set of circles is?] is MIDDLE SCHOOL, meaning that spanning two words in each theme phrase (i.e., in the MIDDLE of the phrase), is a college or university (i.e., a SCHOOL). Like so:

Theme: The theme answers all contain the substring LINE, running vertically down the grid. Also, the LINE drops down further each time– it’s at the start of the first theme answer, and the end of the last one. A nice touch! 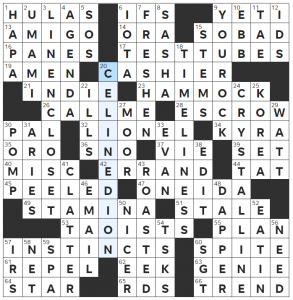 Good morning folks! Someone can fact check this, but I believe it’s Kate’s solo debut– congratulations!

With the theme answers going vertically, the long acrosses, TEST TUBES and INSTINCTS were bonus fill. The mid-length across fill was really nice (CASHIER, HAMMOCK, CALL ME, ERRAND, STAMINA), and I know Kate would have come up with some deliciously tricksy and fun clues if this were a puzzle for a different outlet. (USA Today puzzles are supposed to be very easy, and don’t allow pun clues.) More notes below: 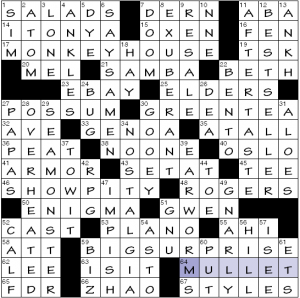 I was hard-pressed to figure out the theme as I was solving, and even after encountering the revealer it took a couple of beats to sort it.

It’s an ambitious theme, and if you’d described it to me in advance I would have said that it’s a neat idea but probably unworkable, that one wouldn’t be able to find enough entries. Big surprise, eh? So—very well done! 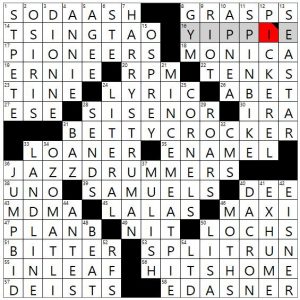 A touch harder than his recent average today for me from BEQ, but a consistent grid with fun stuff, no eyebrow raisers, long entries through the middle, and open corners. And 64 words. I’m a fan.

Lots of stuff from the world of nature today, huh? 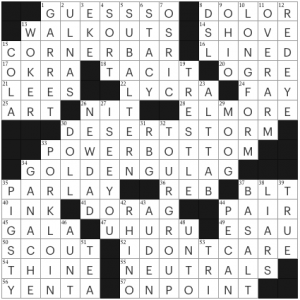 Fave clue: 30a. [Filmdom’s Chucky, Billy, Woody, or Slappy], DOLL. Ha! Not a last name. Woody’s in Toy Story, Chucky and Slappy are horror characters (movies and R.L. Stine kids’ books, respectively), and Billy … I don’t know this one. Googling … oh! Billy was a gay doll.