Heads up, puzzle people! The December 27th issue of the New Yorker will be an enhanced version of the annual cartoon issue. It’s Cartoons & Puzzles! The puzzles will include crosswords, a cryptic, an acrostic, a trivia quiz, and a meta-puzzle hidden throughout the magazine. The 12/27 issue should hit newsstands and subscriber mailboxes around Monday the 20th, and online readers can print out the puzzles. I’m looking forward to it!—Amy

Hi, all! I hope this post finds you doing well as we head into the second half of December and the holiday season for many. Stay safe out there! (Also, apologies for the slightly later review post – it’s been quite the busy weekend getting things ready to mail out for the holidays.) 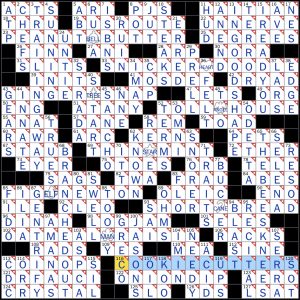 33A: [Relative of a te-hee / Bit of marginalia] SNICKER / DOODLE
36D: [Genuine] (HEART)FELT
– The SNICKER DOODLE cookie was cut with a HEART shape.

102A: [Breakfast dish / Fruitcake tidbit] OATMEAL RAISIN
88D: [More than enough] TOO (MAN)Y
– The OATMEAL RAISIN cookie was cut with a MAN shape.

116A: [This puzzle’s images, in two different ways] COOKIE CUTTERS

Each of the theme entries is made up of two halves, literally “cut” by holiday-shaped COOKIE CUTTERS, shapes that act as rebuses in the puzzle. I love that the puzzle has the little cut-out shapes in the rebus squares, which adds a nice touch and hopefully aided in solving the puzzle. Fun fact: The version of this puzzle that I test solved did not have the shape images in the rebus squares, which made the rebuses essentially unchecked by the crossings. That made the puzzle much more difficult to solve (for me at least!), so I’m excited to hear how the officially published version plays for folks. Let me know in the comments what you thought!

Theme: Familiar adverbial phrases are clued punnily, somewhat akin to the style of a Tom Swifty. 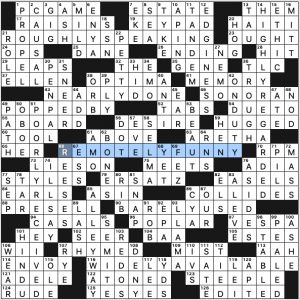 These work, and even though I have a nit with REMOTELY FUNNY, I think I liked that one best for the clue’s timeliness.

Not much long fill due to the fact that theme answers are in both directions. But the grid is clean and has numerous highlights: ALLEYWAY, POPPED BY, PEN PAL, RAISINS, ERSATZ.

Chipsi mayai, aka “zege,” is a French fry omelet from Tanzania. 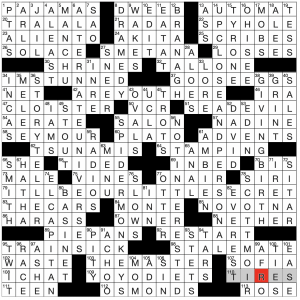 Felt like all those new-to-me names were on the same side of the puzzle, which grated on me a bit. Of course, they’re all fairly crossed, but they were difficult for me to infer and tackling each of those areas with the same elbow grease felt a bit redundant to me. Happy to see new names of course, just rough for me as they were all in the same area.

TIES felt oddly clued [Some wedding reception accessories] as I don’t really think of them as “accessories” specific to wedding receptions. I mean, the clue works, but it felt weirdly specific and vague at the same time. Crossing the difficultly clued TIRES [Black rings, often] and a name I didn’t know SCOTT MOIR made me all but guess on the I and the E in TIRES. Happy Pencil appeared, but I wasn’t confident there.

Always fun to solve a WaPo themeless in the long run.

Theme: Each theme answer included ICON in the middle, hiding the “image” within the phrase. 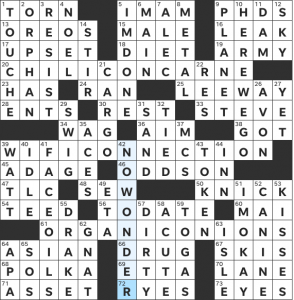 This was a fun theme, especially since hidden images on their own tend to be games, so it felt apt for crosswords as a medium. I also appreciated that ICON spanned across two words in each answer, as well as the connection in cluing between 20a and 61a. I wasn’t crazy about ORGANIC ONIONS as an answer because I felt like the clue could have been a little more specific, but the crosses helped there.

Some other things I noticed included:

That’s all from me! Have a great week!