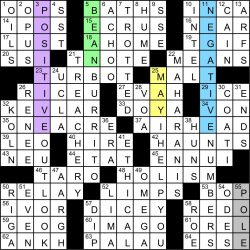 Hello there, everybody! Hope you all got your Christmas shopping done (assuming your holiday plans included shopping) before the weekend! All I need to shop for is some hot chocolate — Swiss Miss acquired on a 2 for $4 discount — and got the job done! Now time to get a little warm!

Today’s crossword allowed you to do some pole dancing, if you will, with four long down entries starting with words that can come before the word POLE (55D: [North ___ (Santa’s home base or a directional hint to the theme hidden in four vertical answers]).

The vertical themes also allowed for some long, non-themed entries going down as well, and I lost a little bit of time slapping down “maharajas” instead of the actual answer, MAHARANIS,(22D: [Royals of India]). Also, anyone else go with “Geol.” instead of GEOG when seeing its clue initially (59A: [Earth sci.])? I sure did. Whether talking insects or psychoanalysis, IMAGO is a wonderful short entry (60A: [Adult insect stage]). Definitely learned something new with TURBOT, as it almost seems as if I’m learning a new type of fish through crosswords every couple of weeks or so (23A: [Broad-bodied flatfish]). For those who remember the ABC promotion TGIF, with four comedies in a row on primetime on Friday nights, which TGIF show was your favorite (19A: [Weekend warrior’s cry]). Full House and Family Matters is the one show most probably remember, Boy Meets World is the one that probably has the most street cred, and I was a big fan, but I also was a big fan of Perfect Strangers. Then there was Dinosaurs. Remember Dinosaurs? Maybe after seeing this picture, you may not want to care to know/remember. 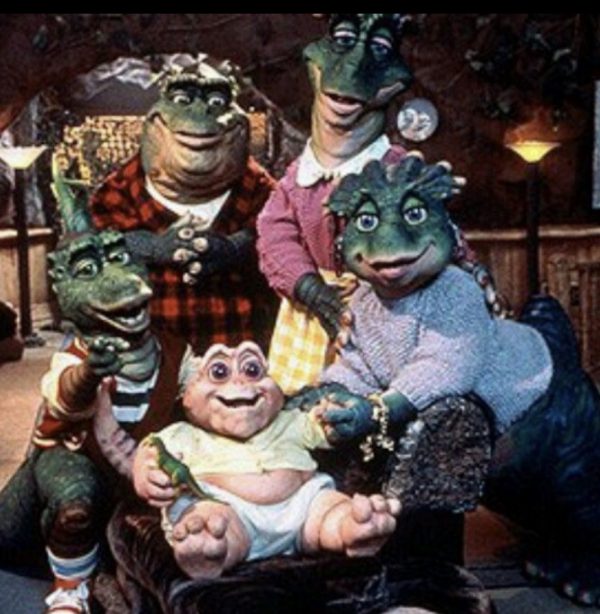 “Sports will make you smarter” moment of the day: MEANS (22A: [Stands for]) & CAIN (12D: [Abel’s brother]) – We have no-hitters colliding with today’s entry. The Baltimore Orioles had another very bad, no-good season in 2021, but, almost inarguably, their season highlight was John Means pitching a no-hitter in Seattle against the Mariners on May 5. Means did not allow a hit, walk, a hit batsman nor allow a hitter to reach base on an error…but because a hitter a reached base on a dropped third strike in the third inning (Sam Haggerty), Means’ performance was not perfect. (Haggerty was then caught stealing to end the inning, which allowed Means to eventually face the minimum of 27 batters.) Nine years prior, Matt Cain of the San Francisco Giants actually completed a perfect game during his no-no against the Houston Astros in San Francisco on June 13, 2012. During the 22nd perfect game in MLB history, Cain recorded 14 of his 27 outs via the strikeout, tying Sandy Koufax’s (1965) record for most strikeouts in a perfect game.

The revealer is APRÈS-SKI (55a, [Activities in an Alpine lodge, and a fitting end to the progression in 17-, 23-, 36- and 49-Across]). In case you’re not much of a skier (as I am not), and haven’t yet encountered après in other crosswords, the phrase literally means “after skiing” and is defined as “the social activities and entertainment following a day’s skiing.” (per Oxford Living Dictionaries)

So I guess the idea here is that we ski down the slope to the revealer.

Cute. It must have taken some finesse to get everything positioned just so, and with fun theme entries to boot. I liked seeing PBS KIDS in the middle there even though my kids are well beyond that age group.

I will confess that knowing the phrase meant “after SKI,” I checked the letters after SKI in each entry to see if they became something. Nope. Not unless PRO PETTY HAWK DSSS means anything to you.

“PLEASE SIR” (I want some more), GLISSANDO, SHELTIE, STALLION, and SKEEZY top the fill today. I liked GROTTO in that NE corner, but that’s about all I liked up there what with its OSES and RESLATES and ENPLANES. Hitting those entries fairly early on in the solve threatened to turn me off, but the theme turned me around. 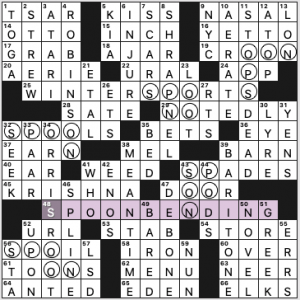 Our theme is 48a. [Display of mentalism … or a hint to this puzzle’s shaded squares], SPOON-BENDING, and the constructor’s Wordplay notes tell us he was inspired by James Randi’s debunking of “mentalist” Uri Geller’s supposed ability to bend spoons with his mind. Are you old enough to remember when URI Geller was in crosswords fairly often? Oof. Anyway, the rest of the Acrosses and Downs aren’t themed, but the circled letters reflect various ways of bending SPOONs.

Turns out Mr. Gilioli is a Brazilian who makes crosswords in Portuguese. It’s always mind-bending when someone whose first language isn’t English can still manage to master the art of making an American crossword. (Zhouqin Burnikel is the most notable example—her mother tongue doesn’t even use the Roman alphabet!)

Biggest question: Is NOTEDLY (29a. [With special importance]) a word that gets much use in English? When the crossings ruled out NOTABLY, that football abbreviation game me pause; 27d. [Some N.F.L. blockers] are RTS, but I tried RGS first. (Apparently RGs aren’t a thing, but Right Guard is a deodorant brand so …)

There were a few other things that jumped out as maybe on the hard side for newer solvers trying their hand at a Tuesday: TSAR right off the bat, URAL, AERIE, ORRIS ROOT, SPLINE, ENOS, maybe LYRE.

Fave fill: Jackie ROBINSON, SHRAPNEL, STOPS DEAD. Speaking of those latter two—I just rewatched The Matrix this evening. Gonna watch the second and third Matrix movies to prepare for the new sequel, out (and on HBA Max) on Wednesday. That “bullet time” remains mind-bending. 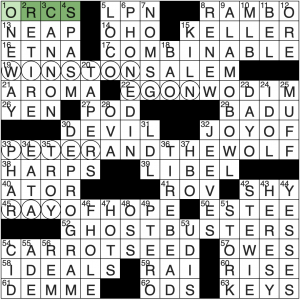 The theme is an old favorite. And sorta timely …

By sorta timely I mean there is the new movie that came out with Paul Rudd in it. I think that was back around Thanksgiving weekend, so it is fairly recent. These are all the characters from the original movie, which I don’t think I have ever seen! There are a few candidates for the Obscure Pop Culture Reference of the Week in this puzzle; I think I may have learned a thing or two! A solid 4.4 stars from me. 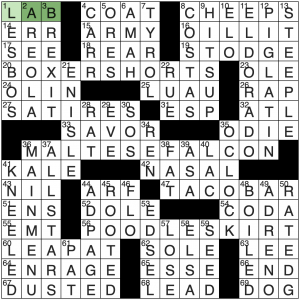 This puzzle has gone to the dogs!

Yes, we have the breeds lab, boxer, Maltese, and poodle starting the theme entries. I almost missed it, but it is a nice touch that the themers all match up, even the ones that span two grid entries! It’s at least different, I’ll give you that! Nothing too hard in this one, but it IS a Tuesday! 4.4 stars from me.

Longer solve time today for me but an excellent puzzle with lots of great entries, a fun theme and themers, plus a fantastic grid design! 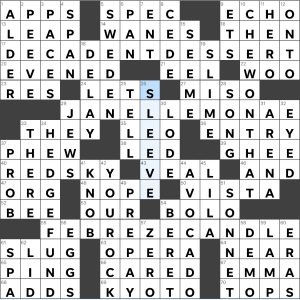 Theme: the beginning of each themer is the abbreviation of a winter month

What a fun theme, though this winter has been more mild, at least so far, and we likely won’t have snow for the holidays—at least not in Columbus, OH! “Start of Winter” had me watching for signs of winter: ice, snow, etc. However, the theme turned out to be the months of winter which makes for a fun set of differing themers. Beginning with DECADENTDESSERT, I was originally misled by the clue (prior to figuring out the theme) into wanting “devil’s food cake” to work and I got the first two letters still but sadly not the rest of the cake. Next up is JANELLEMONAE whose name I recognize but not from the clue, which I may need to remedy that soon, so I needed a few crossings before I could complete the themer. Finally, for FEBREZECANDLE, the clue had me thinking “candle” but I needed more crossings for the brand name. Also, the months proceed in order: December, January, and February. Being from the Midwest, specifically Minnesota, I personally consider March and April winter months and sometimes even November. Not all winters are like that though many often include all of those months!

Lately I’ve been nerding out with my DND scented candles from Cantrip Candles. Anyone who enjoys 100% soy candles will love their high-quality and unique scents—so far I like Stonemoss Chapel best but Le Jardin des Fleurs is lovely as well and another popular one is their The Library Scriptorium. They have 6oz but if you also love candles and are a DND nerd their glass 16oz contains a metal D20 (20 sided dice) at the bottom for a bonus lasting surprise once the candle is done. Bonus pictures of these candles in action at the bottom of the post!

Stumpers: WANES (“dwindle” or “ends” came to mind), BOLO (“clip-on” was my first instinct), and HERO (“idol” is the usual go-to for similar clues)

One final aspect that I want to discuss is the set of entries that have clues that seem like they are for specific items but in fact are general entries. I’ve seen this previously in puzzles but it popped for me today in this puzzle since their are multiples: SPEC, ENTRY, and DECADENTDESSERT. I enjoy this type of pairing of clue and entry, though I’m not sure there is a way to tell perhaps except for having some of potentially more common ones (like SPEC and ENTRY) in mind when clues come up that don’t first fit a more specific entry. What are your thoughts on these types? 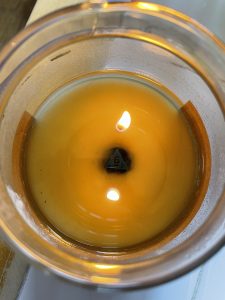 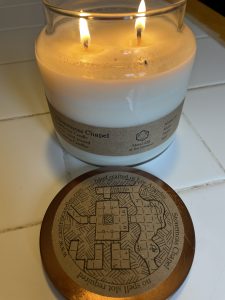 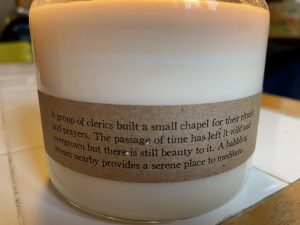 I don’t know how big your crossword grid is, but this one’s about a foot. 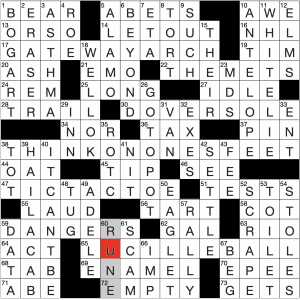 THEME: Common names/phrases with parts of the foot in them.

Fun, simple, entry-level theme. I’ve seen a very similar concept. One of which I constructed for Newsday some time ago. Stanley Newman had the idea to make all the themers vertical and give it the title  “Underfoot.” Then, I saw the exact same theme in a NY Times puzzle by Jeffrey Wechsler, I think. Lemme see if I can find it….

Nope. Gave it five minutes of searching around. But I’m almost certain it was his.

Anyway, solid themers all around. DOVER SOLE is new to me. I’m sure it’s delish. Just realized how long it’s been since I’ve seen TIM Robbins in a movie.

Who chews pencil ERASERs? I mean, if you’re gonna chew the ERASER, why stop there? I’m sure the rest of the pencil is equally as scrumptious.