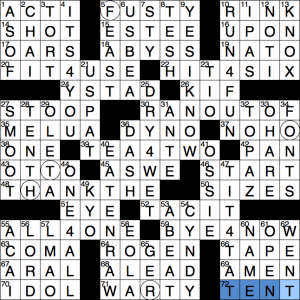 hello and welcome to episode #707 of matt gaffney’s weekly crossword contest, “By the Numbers”. for this week 3 puzzle, the instructions tell us that we’re looking for a five-letter word. what are the theme answers? five squares in the grid are rebus squares, with FOR standing alone as a word in one square:

i’ve labeled the five rebus squares in the screenshot with a 4, since that’s at least somewhat suggested by the title (and it’s what prince would do). they do form a symmetric arrangement—specifically, a quincunx. that’s interesting, but it may not necessarily be clueful; it’s just the only way you could put all of these pairs of crossing seven-letter theme answers into a 15×15 grid without overlapping any of them.

there are a lot of other numbers in the grid, though. in addition to the FOR/4 squares, several of the theme answers contain other numbers (HIT 4 SIX, TEA 4 TWO, ALL 4 ONE/ONE 4 ALL). plus there is a stray ONE in the grid, although it’s clued as {Like a gas gauge when the tank’s extremely low}, suggesting it should be parsed as ON E instead. i suspect this is to avoid explicitly duping the ONE from the three musketeers, but who knows? there’s also the ordinal {J or kappa’s place, in their alphabets} TENTH.

all in all, there are five different numbers appearing as part of grid entries: ONE, TWO, [FOR/4], SIX, and TEN(th). the most obvious thing to do is to look at the correspondingly numbered squares in the grid: ACIUR. well, CURIA is a word, but it’s not a very common word and i don’t think it’s the right answer; certainly, nothing suggests putting those letters into specifically that order.

taking the added letters in order gives FORTH, which is the answer. that’s a very good answer! and the mechanism is very slick—i enjoyed the play on words involved in reinterpreting the title to mean the four squares adjacent to each 4.

the only thing i did not love about this crossword was the fill. there were many, many unfamiliar and/or awkward entries in the grid. crossing partials A LEAD/A BEAT; other partials AS WE and US BE A (!?!); partial japanese place name KYO; unfamiliar (to me) names CYNDY and MELUA; half of a fairly specific misspelling of a word DYNO; awkward multiple-word abbr. U.S. PAT.; duped RUN 4 FUN/RAN OUT OF crossing each other; old-style crosswordese OLETA (repurposed for thematic use, but still) and EOLA. who wants to see any of that in a grid, let alone all of it? 12-down, that’s who. so that definitely detracted from the solving experience. but the meta mechanism is the main course here, and that was excellent, so i’m giving this puzzle 4.5 stars anyway.