·•No WSJ today because of the holiday•·

Merry Christmas to those who celebrate! I hope you’re all safe, warm, and healthy. 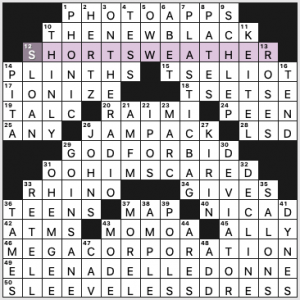 Unusual grid design here with left/right symmetry—it looks like an old tabletop telephone to me. We’ve got a 9/11/13 stack up top, a 5/7/9/11 stack in the middle, and a triple-stack of 15s at the base.

Forgot to time myself but this puzzle was hard! Piecing together the top stack was slow going when the clues didn’t give me the Acrosses or the Downs.

Fave fill: THE NEW BLACK, SHORTS WEATHER (just a few months off!), T.S. ELIOT (whose initials are goofily tied to a TSETSE fly). “GOD FORBID,” “OOH, I’M SCARED,” Jason MOMOA, ELENA DELLE DONNE, and a SLEEVELESS DRESS, which feels like a Zawistowski/Weintraub sort of entry and I like it. In the Downs, there’s “oh em gee” (I just can’t type that in all caps), Donna Summer’s “ON THE RADIO,” a PLASTIC BAG to SCHLEP your groceries in, and Harvey KEITEL. Could do without DEVIATOR, which just looks weird; you’ve never had cause to use that form of the root word, have you? 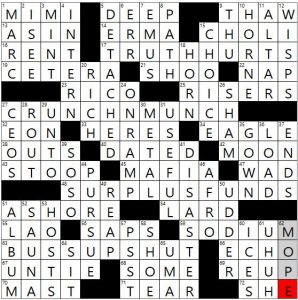 It took me quite a bit to see the theme here, but it’s right in front of my face: “All I Want for Christmas Is…” “you.” (NOT “my two front teeth”) Each themer uses only -u- for its vowels:

Nothing else is jumping out to me. Have a great weekend! 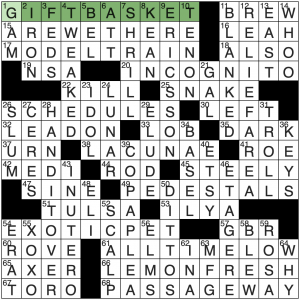 Whipped through this one in a near-record time. 3:48 for a Saturday LAT challenger puzzle is an extraordinary time for me! That might actually be a record; I don’t track these sorts of things that closely. David Karp’s name is NOT in the constructor database on this site; is this perhaps a pseudonym for someone? This is quite a work of art for a debut puzzle! If it IS in fact a debut, please make more! This was a great themeless construction. Nothing too hard in it, but that is part of what makes it so good! Hope you enjoyed this puzzle as well! 4.6 stars from me. 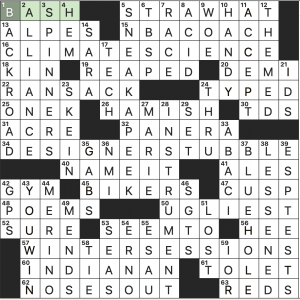 Tough one today. I struggled mightily with this grid. No clear toeholds in this one; you just have to slowly muddle your way through. I am showing you a clean grid image today; suffice it to say I had a few stumbles along the way!

This is my last Stumper review for this site. I am signing off on 12/31 after over 6 years of blogging. Thanks to all the kind comments, and I will see you all soon hopefully at an in-person tournament soon!