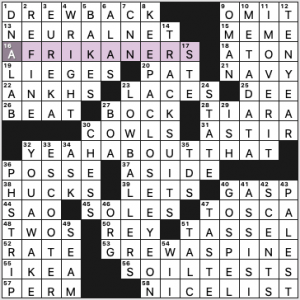 An enjoyable puzzle with lots of great fill, though it played more like a Saturday puzzle for me. I got started in the top right instead of the top left, and had to back my way into that corner.

Fave fill: NEURAL NET, AFRIKANERS, “YEAH, ABOUT THAT…,” GREW A SPINE, “YOU AWAKE?,” E-SCOOTER, LOWBALLERS, KEEP A CLOSE EYE ON, the pandemic-suitable TRACK SUITS, METADATA, and “I’M OVER IT.”

Not convinced that NICE LIST is a discrete thing, but it’s a Christmas Eve puzzle so it would be churlish to object to it.

It’s Christmas Eve and thus tonight will be the silentest of nights. So it’s apt that we have a puzzle named “Silent Night” today. Each theme answer has a silent letter as indicated by a circle (and the clue), and guess what? Those letters spell out NIGHT. 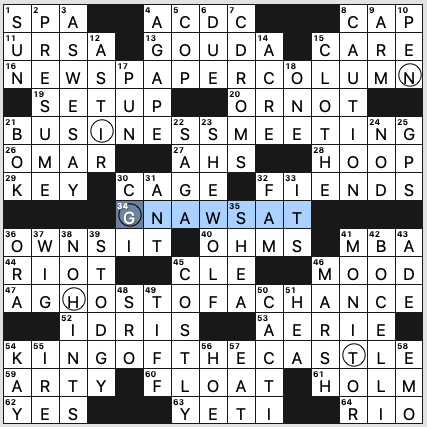 Impressive that Paul managed to find four grid-spanning entries to deliver the silent letters. GNAWS AT, on the other hand, is less impressive. But the overall execution of the theme is nicely done.

Fave fill includes Andrea BOCELLI, SHE-WOLF (though it seems to imply that all creatures called “wolves” are male), and “NO HINTS.” I’m dubious of “AS WE SAY” as an in-the-language phrase when “as they say” is far more prevalent.

Nice Christmas Eve grid. 3.6 stars. Happy Christmas to all those celebrating the holiday! 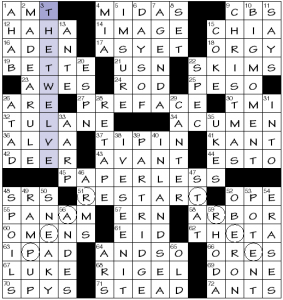 Left-right symmetry in this holiday 15×16 grid.

Unless I’m missing an additional element, this seems like a haphazard theme. Certainly it has relatable content, but the presentation doesn’t feel cogent—it’s just all sort of there with a ‘whatever’.

That’s all I have. Still underwhelmed.

Theme: Each themed answer ends with -ERA, making it the “end of an ERA. 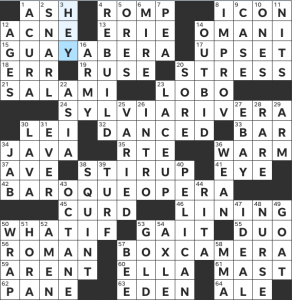 This was a nice grid packed with four theme answers. I didn’t know what a GUAYABERA was, so that was tough, but I caught it on the crosses (and then googled it immediately). SYLVIA RIVERA was a great theme answer, both as a name that I was familiar with but also one that’s great to see highlighted so clearly in this puzzle. And for BAROQUE OPERA – well, it was certainly unexpected, but, you know what they say, if it ain’t BAROQUE, don’t fix it. In this case, it definitely was not broken and made for a fun themer you could easily pick up on the crosses.

Some other Friday faves here:

A great puzzle and a fun time as we hit the “End of an Era” with 2021 closing. Happy Holidays!

(If of interest– while solving, I listened to this wild “Santa Baby” remix that I am currently obsessed with.) 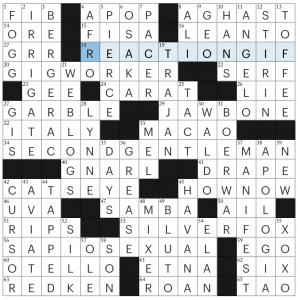 Hello everyone! Today’s puzzle was a kind of eclectic mix of trivia I didn’t know, modern terminology, and terminology that thinks it’s modern but wasn’t actually to me?? This was arguably a themed puzzle– five of the entries were also entries that were added to Merriam-Webster in 2021:

Other notes on other fill: