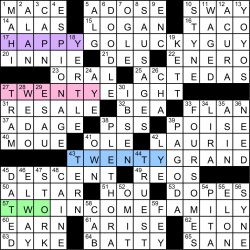 Hello there, everyone! For the last time in 2021, I wish you all of the best and hope that you all are staying safe.

With the countdown to the new year in mind, we have a nice little sendoff to 2021 and best wishes for 2022, as the first word in the four theme entries, when combined and put in order from top to bottom, create the hidden message of “Happy Twenty Twenty-Two!” Honestly, wasn’t it 2005 like only five years ago or something?!?! Feels like it!

One can never tell which entry in a crossword may conjure up emotions about past life experiences (one of the main reasons I love doing crosswords and talking about them), and I cannot stop reminiscing right now about my high school, Bishop Ford Central Catholic High School, after seeing PAGODA (39D: [Chinese shrine]). Bishop Francis Xavier Ford was a Brooklyn-born missionary who spent a great deal of his life in China, and the eponymous high school, which was located in the Park Slope section of Brooklyn, had its exterior built in a pagoda-style fashion. Bishop Ford’s work is the first thing you  learn about when you arrive at the school, and it was a school that was an outlet for a lot of middle-to-lower income families worried about tuition yet still wanted a quality education. (For real, it was one of the jewels of Catholic Schools in NYC, and I’m not saying that because I might be biased.) By the time I graduated from the school in 2000, it seemed like it was thriving. By 2014, after a serious drop in enrollment and the emergence of charter schools in the city, the school closed its doors for good. Total shock, though that was the wave that was happening in NYC about five years ago, with a number of prominent Catholic schools closing or on the verge of doing so before being rescued. It was the place where I played basketball under one of the all-time great head coaches in New York City basketball history, Ray Nash. The school was the place where I solved my first crossword, co-solving with my high school science teacher. Ms. Dorsey, who first turned me to crosswords. If it wasn’t for that school, there’s a good chance I’m not doing crosswords, let alone talking about them in this space. Man, I miss that school with the unmistakable pagoda exterior and architecture.

OK, enough of the sob story, right?! Back to what you really came for: sports!! OK, maybe not, but I do have to go and leave off with this…

“Sports will make you smarter” moment of the day: STORK (47D: [Baby carrier in a birth announcement]) – One of the most memorable players and personalities on one of the most memorable teams in NFL history, the Oakland Raiders’ and their near three-decades of dominance from the 1960s to the 1980s, was the man nicknamed “The Stork,” Hall-of-Fame defensive end/linebacker Ted Hendricks. The 6-foot-7 Hendricks won four Super Bowls, three of which came with the Oakland Raiders, and he made eight Pro Bowls during his career which saw him record 60.5 sacks. Hendricks’ height also helped him become, arguably, the most premier special teams player in league history in terms of blocking punts and field goals, as he blocked an insane 25 kicks in his career.

EMPTY NESTERs take center stage today with the revealer at 57a [Parent whose kids have moved out, and a phonetic clue to parts of 17-, 25-, 35- and 48-Across]. The other theme entries are familiar two-word phrases with an M and a T nested in between the two words. 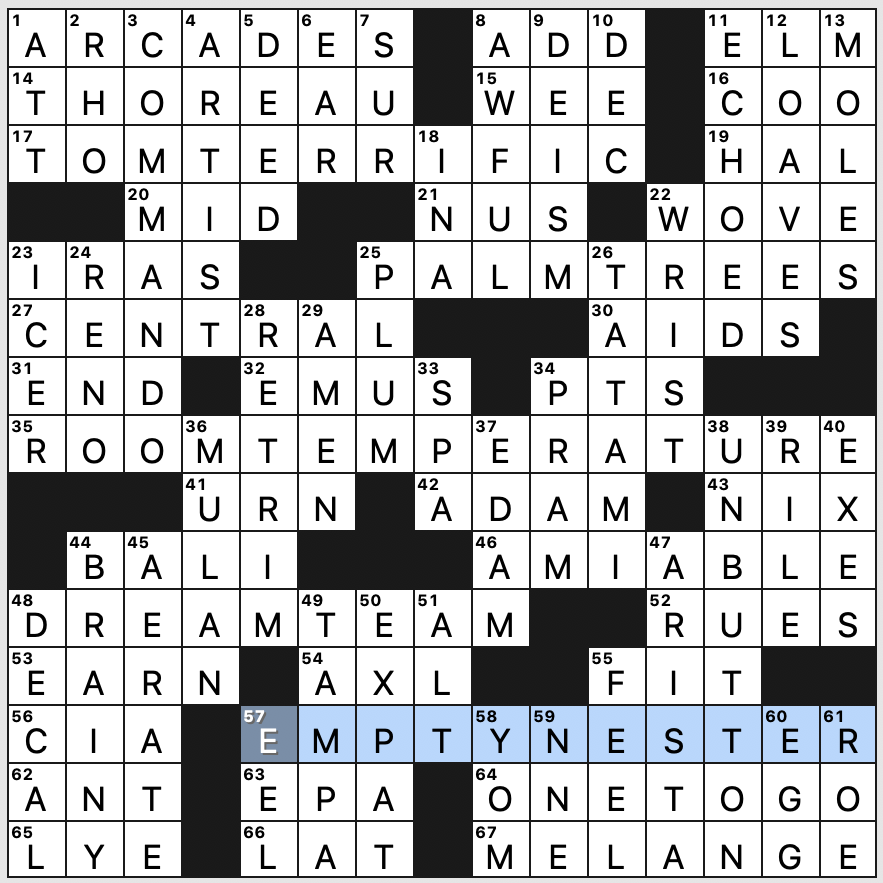 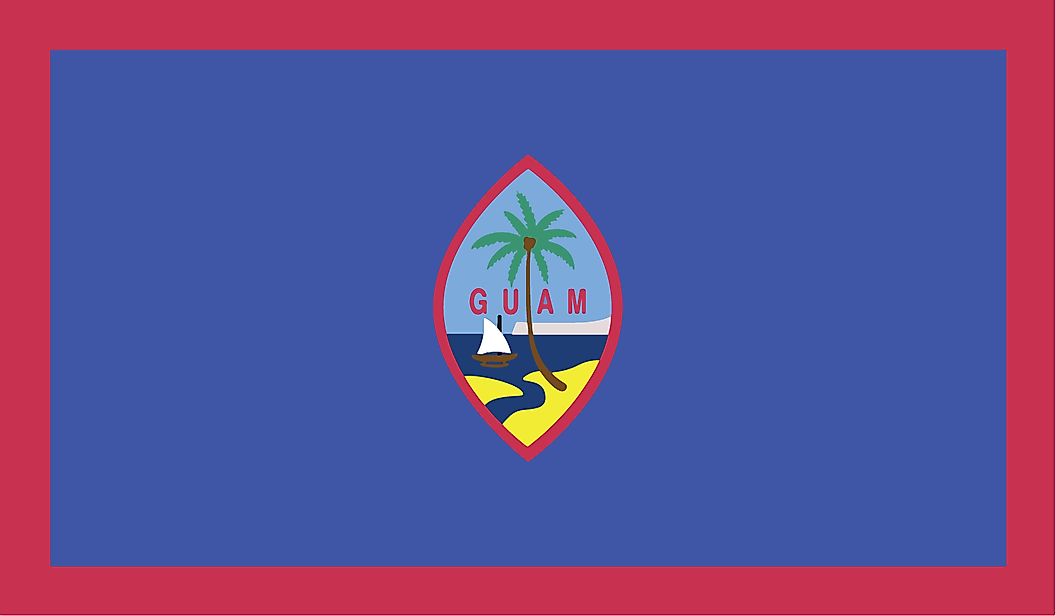 Guam flag with a palm tree and a proa

Nice theme with a satisfying play on words in the revealer.

My fill faves include COMMANDO, THOREAU, “ONE TO GO!,” and MELANGE. RETRIM isn’t great but it crosses two themers and gets the job done.

Good evening everyone! I’m subbing in for Amy today. Hope you have all had (or are still having!) a restful holiday season. I found this to be on the tricky side for a Tuesday, with a few pieces of fill that I had only learned from seeing them in other puzzles. 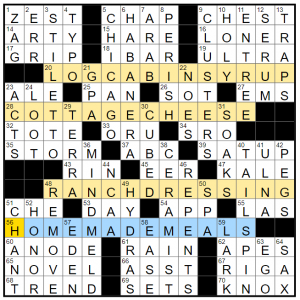 This theme lacked a bit of consistency for me. Normally I’m not a stickler about that sort of thing, but in this case it gave me issues parsing the clues. In the first two theme answers, removing the first part of the food item doesn’t change the meaning of the phrase– “syrup” is a food topper, and so is “Log Cabin syrup.” Similarly, “cheese” is a dairy product, but so is “cottage cheese.” But with the third, “ranch dressing” is a very different type of food from “dressing” which I found confusing. That’s made tougher by the fact that (I think?) “dressing” is not a universally known synonym for “turkey stuffing.”

The theme answer tied things together really well! I like how it wasn’t just “See? All the answers start with a type of house!”– the MADE part of HOMEMADE MEALS got used as well.

So many nice long answers! STILETTO (Shoe named after a dagger) was a favorite for me because I learned that fact while reading A Series of Unfortunate Events— a villainous character has a pair of stilettoes where the heel is an actual, literal dagger. MIND MELD, TAIL SPIN, CLUSTERS, and CHICAGO were also great pieces of fill. HABANERA was new to me– I really like that they clued it as the dance, rather than the name of an aria!

There did seem to be quite a bit of questionable short fill– more than I would expect for a Tuesday puzzle. IBAR, SOT (please let’s stop using this…), EMS, ORU, SRO, RIN, EER… I am also verrrry skeptical of spelling “the plural of NO” as NOES. A bit too much for me, but perhaps I am spoiled from solving the USA Today puzzles, which tend to have cleaner fill but also more blocks and less theme content / symmetry! What did you all think?

A great theme and themers today with lots of long bonus fill in both directions, along with a fun grid make for a very enjoyable puzzle today! 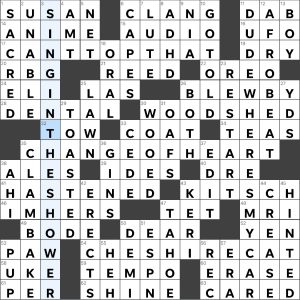 Theme: the word “chat” is split up in each themer and can be formed by putting the beginning and ending of each themer together—“snapping” them together like building blocks

Today’s title hints at the theme but still required me to puzzle it out, just a bit. CANTTOPTHAT was the last themer to fill in for me, as its clue didn’t immediately click so I proceeded on. CHANGEOFHEART took me a moment, as “one’s mind” was my initial instinct but was close enough to get me there for the first pass. At this point I didn’t see “chat” yet but with CHESHIRECAT which I found to be easy fill. Looking at the title, at this point, “chat” jumped out in the third then second themers and based on that pattern, I could deduce the first themer and complete it. The word “chat” is also split differently in each themer: the first is “c” then “hat”, the second “cha” then “t”, and the third “ch” then “at”.

Stumpers: CLANG (“chung” and “choochoo” first came to mind but now I have a “Clang, clang, clang went the trolley” earworm), WOODSHED (we always had a pile not a shed so needed crossings for the second half), and AUDIO (“sound” and “noise” also seemed like strong possibilities)

Some amazing bonus down entries that span this puzzle: SINGINTHESHOWER and DUDEWHERESMYCAR. There’s also a lot of longer fill as well—a plethora of excellent entries. Faster than most of my usual time, some minor misdirections and stumpers kept me from a faster time though it didn’t feel like it since I had a fairly smooth flow. All in all, a very fun puzzle! 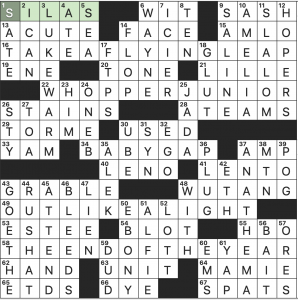 This is my last Jonesin’ post for a while. Thanks to all who read this blog! Perhaps I will make a guest appearance here or there in the future. Hope to see you all actually in person soon! 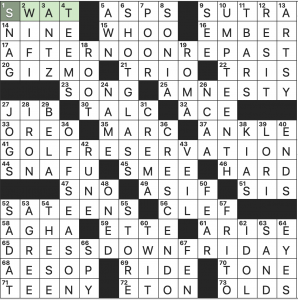 After seeing the first two, I was actually curious as to what the third entry would be. Nice clean fill in this one, and not too hard, but again, it’s Tuesday. I am rambling! 4.3 stars today.

This is my last blog post for Fiend for a while. Thanks again to all! Until we meet again!

Christina Iverson’s Universal Crossword, “From A to B”— Jim Q’s write-up

THEME: The letter A in common phrases changes to B and wackiness abounds. 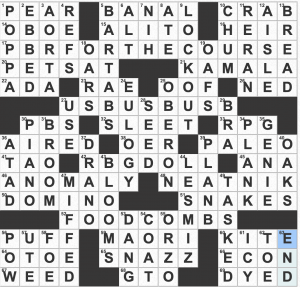 Classic theme! A theme so classic, that if you attempt it, you’d better have some damn good theme entries. And boy, this one most certainly does. My favorite without a doubt is USB! USB! USB! It’s such a great entry with a hilarious clue and visual. RBG DOLL (my girlfriend has one!) and PBR FOR THE COURSE (I’m sure PBR has come along for many a golf outing) were fantastic as well. The last one seems to be a bit of an outlier since the first three are all initialisms after the change. FOOD COMBS and the base phrase FOOD COMAS are nice finds, but it doesn’t feel like it belongs to me.

In the fill, I don’t understand the clue/answer pair for three entries, which is a lot for me:

Couple other things: SNAZZ feels weird without a -y or -iness added to it. Alligator PEAR is new terminology for me. That makes sense though. Fun to learn that one.

Great clue for BLOOMS [Word that means “flowers,” with or without “ss” at its center] and very apt clue for END as it was indeed the last entry I filled in.

Having trouble finding a .puz version of this one. I absolutely abhor solving in the webapp for so many reasons. It really mars the solve experience. Here’s to hoping Universal catches up with the competition in 2022 and updates that.