Fun title to this one. The revealer starts at 70a: CAPE / COD [With 71-Across, vacation spot where you may hear the starred answers]. Those starred answers are familiar phrases except the “AR” sounds are changed to “AH” sounds, with spelling alterations as necessary. 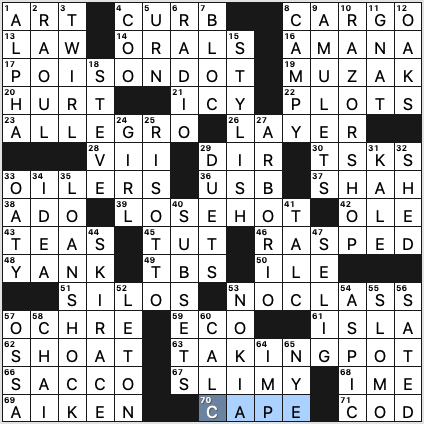 No doubt this theme has been done many times before, but I enjoyed this one. The aha moment came with the first entry, so I didn’t need a revealer, but it was welcome once I got to it. Funny, using COD as the revealer makes me think it was originally CARD and that makes me think of the phrase CARD SHARP which, if altered a la this puzzle, would become COD SHOP which would be be a wacky but cluable phrase. I wonder if there are other double “AR” phrases that could altered in such a way. Have at it! 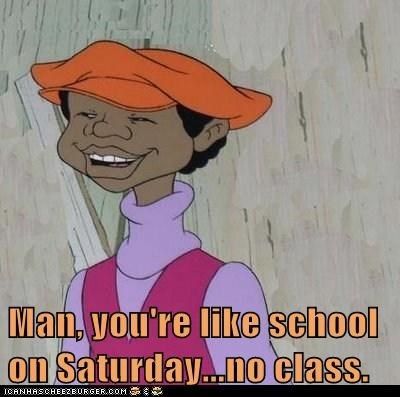 Moving on to the fill, RISOTTO is nice, but I hadn’t heard of ARBORIO before. It’s an apt partner for the former, being a variety of Italian rice, but some of the crosses (especially the abbreviation DIR) are less than ideal. Elsewhere, I liked SKI RACE, AMULETS, ALLEGRO, and NO CLASS clued [What a kid on a snow day or a boor has] which reminded me of every episode of Fat Albert.

I must also note that SW corner with SHOAT, SACCO, and AIKEN all crossing OSSA. It was doable, but tough. It might take some effort, but I suspect that corner could be reaccomplished.

A fun theme, some good fill (some less good), and colorful cluing. 3.75 stars. 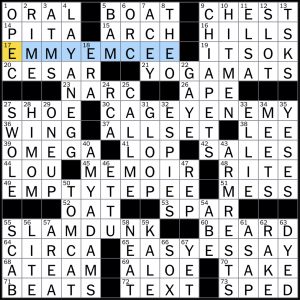 Hello, my lovelies! Erin Milligan-Milburn filling in for Amy today. We’re going to make this quick, as my kitten Thwomp keeps pawing at my hands and the screen. Our NYT theme is words that can be read by pronouncing two or three letters each:

That’s it for the theme. If anyone wants to discuss it further, or comment on any SLAM DUNKS or GLOOP in the fill, feel free. I’m going to go extract the cat claws from my pants and the fangs from my hand. 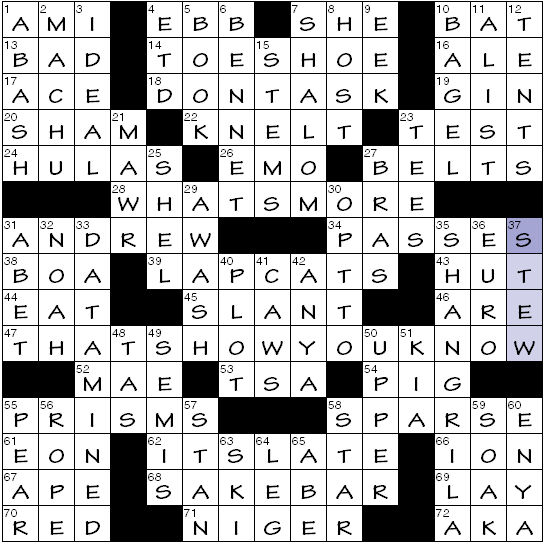 Metanalysis is the name of the game here. Definition of which from m-w.com: “a reanalysis of the division between sounds or words resulting in different constituents (as in the development of an apron from a napron)”. Some more examples here.

Interesting how each answer has at least one contraction. Seems intentional, so I guess it’s a theme element.

Editor: Erik Agard
Theme: The theme answers are placed vertically, and each one contains the letters “EERF”, so in the grid the word “free” is literally going “up” 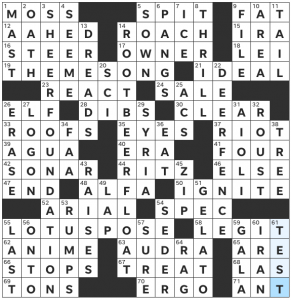 A rare sighting of up-down symmetry in the wild! It definitely makes the grid have a striking visual impact. The symmetry also allows for theme lengths of all different lengths without just placing them anywhere in the grid, which is a personal preference of mine. All three of these phrases are great finds, in my opinion. I haven’t seen SHEER FOUNDATION in a puzzle before despite it being a pretty common beauty term, and DEER FENCE and ROOT BEER FLOAT are fun too.

Favorite parts of the puzzle:

Places I got tripped up: 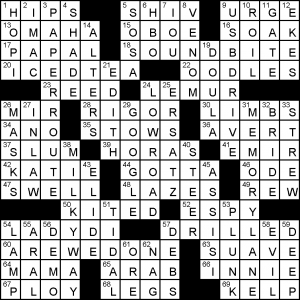 Today’s puzzle by Debbie Ellerin features a simple theme concept, but done neatly with a few interesting wrinkles. The revealer, LOWROAD, and indeed all the theme components, are found in the downs. There are two stacked pairs of answers ending in a “road”, all with at least some degree of space between their meaning and a little road: PAPERROUTE, MILKYWAY, USBDRIVE and MEMORYLANE.

There was a bit of a wedding subtheme going on today, with LADYDI cross-referenced with BRIDE, plus INLAW and HORAS. 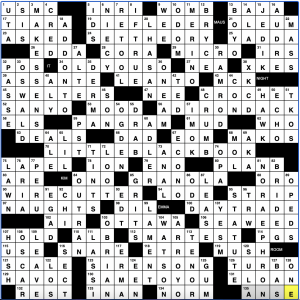 This week’s AVCX is a 21×21 grid by Aimee Lucido to close out the year.

Six special squares act as LITTLE BLACK BOOKs – the title of a book forms the extra letters needed by the surrounding entries:

This feels perfectly timed for Jolabokflod and I enjoyed it a lot amidst all of the other holiday celebrations right now.  Happy Wednesday!