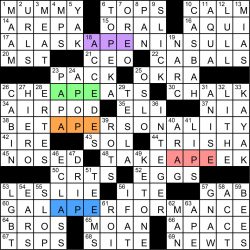 Hello there, and Happy New Year! Hope you all are doing great to start off 2022. Also, if you’re in an area that got some serious snowfall over the past 48 hours, hope you’re staying safe and making all the snow angels that you can!

Today’s puzzle is one to go ape for, as each of the first five theme entries are multiple-word answers in which the letters APE span two words, with those letters also appearing as an answer to reveal the theme (63D: [Tree swinger who’s hiding in five answers]).

I’ll be making some food right after this blog, and MEAT (3D: [Predictable steakhouse order]) and a PAN are going to play heavily in the meal made coming up — beef lasagna (8D: [Zero -star review]). For those old enough and/or those who love iconic movies, who else can’t look at LESLIE and not have “I am serious…and don’t call me Shirley” on repeat in your mind right now (53A: [“The Naked Gun” actor Nielsen])? Just last week, I helped a person find his AIRPODs that he dropped on the bus and, afterward, I looked up if those things still cost an arm and a leg (34A: [Wireless earbud from Apple]). Still are. Can’t say that I’ll ever pay over $50 for earbuds/headphones, let alone $100! But knowing me, I’ll probably cave sooner or later and realize if it’s worth the pricey investment.

“Sports will make you smarter” moment of the day: SLICK (9D: [Crafty]) – One of the more beloved former basketball players in the Great Northwest was Donald “Slick” Watts, who played six seasons in the NBA in the 1970s. Just more than four of those seasons were with the Seattle SuperSonics, and in the 1975-76 season, “Slick” led the NBA in both assists and steals. Watts was also was a pioneer of sorts, as he was one of the first players to sport a shaved bald head, which is how he earned the nickname “Slick.” Watts son, Donald, also played basketball and was a member of the University of Washington basketball team that made the Sweet 16 in the 1998 NCAA Tournament.

Theme: The theme answers form a quote from MARGARET FARRAR 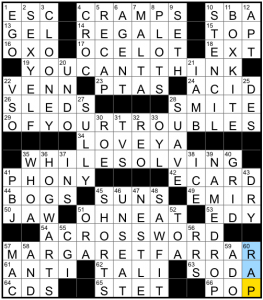 Hi all, it’s Sophia filling in for Amy on the Tuesday puzzle – congrats to David on his NYT debut!

It’s the return of the quote puzzle! I haven’t seen one of those in a while. Was the last one to run that Sex and the City quote that was also about crosswords? Are all New York Times quote puzzles required to be meta now???

Quote puzzles can be tricky on easier days of the week because, unless you somehow know the quote immediately, they more or less require the solver to start by solving downs-only. I’ve heard this quote before but it took a while to come to me, so this puzzle was slower than the usual Tuesday for me. However, I did know MARGARET FARRAR immediately, which helped immensely with the bottom section. For a bit of history, Farrar was the puzzle editor from 1942 through 1969, and she created many of the current standards in crosswords, such as how the puzzle should be rotationally symmetric (I wonder how she’d feel about being memorialized in one with mirror symmetry!)

After solving, I asked both of my parents (both regular solvers, who also talk to me enough about puzzles to have a fair amount of inside knowledge) who the first New York Times puzzle editor was, and both of them thought it was Eugene Maleska, who actually edited the puzzle from 1977 until his death in 1993, when Will Shortz took over (poor Will Weng, who edited between Farrar and Maleska, is often forgotten). So I am not sure how this is going to play, difficulty-wise! BUT even if it’s a little tricky to solve, I think it’s a good idea for solvers to learn about Farrar and know some NYT puzzle history! Although, as a crossword constructor, I kind of have to disagree with her quote; there has been many a time I’ve solved a puzzle and thought “man, I wish I had written that clue/ included that answer”!

Theme: Familiar phrases whose first words progress from a standstill to an all-out sprint. 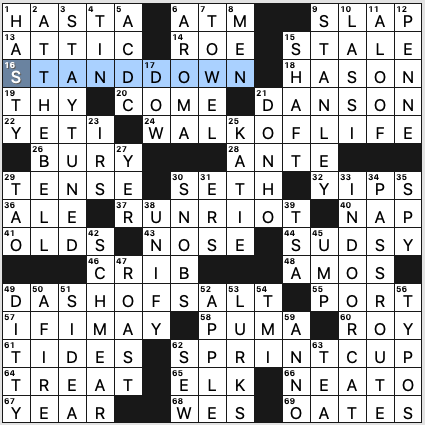 Pretty nice. That’s a clear progression in my mind. When I think of someone running, I usually think jogging speed. Someone dashing would be faster but not as fast as an all-out sprint. Also impressive is that the meaning of each word is changed.

Fill, fill, fill, what’s in the fill? AT THE BELL? I’m not sold on that one, but STAY TUNED, INDOOR CAT, and PASS ROUTE are all solid in my mind. I also like SCHMEAR and “IF I MAY…”

Most of the clues are fairly straightforward except for one huge outlier: 41a. [Ransom paid for cars?]. OLDS. I can’t quite make this work. The clue is referring to carmaker Ransom E. Olds, and as such, I feel like it’s missing something. Obviously it’s going for the play on words, but it still has to make sense. If his name was John Olds, I can’t see how [John paid for cars?] would get you the answer OLDS. Oh, hang on, I see it now. Try [Ransom who was paid for cars?]. In other words, [Ransom, whom people paid when buying cars]. Whew. That was tricksy. Not a Tuesday-level clue, buy maybe Orca-worthy.

Hello! I’m back! Did you miss me? Probably not – the amazing Team Fiend didn’t skip a beat while I was taking a break. Huge props as always to our fearless leader, Amy Reynaldo, who keeps this blog going no matter what.

On to the puzzle, which was created by our own Stella Zawistowki. When I see Stella’s byline I know I’m in for a smooth, satisfying solve and a solidly connected theme. This puzzle delivered on all that. I didn’t grok the theme until I got to the revealer because I didn’t stop to think about it. We have four theme answers plus a revealer. That’s a lot for a 15×15 puzzle. Stella pulls it off without compromising the fill and tosses in a grid-spanner just for fun.

DEEP POCKETS, DEEP SPACE, DEEP THOUGHT, DEEP BREATH. Yup. Solidly connected and satisfying. I do wonder why the revealer has a star and a question mark.

The only thing in the fill that caught my eye in an unpleasant way was 15a [Manicurist’s smoothing tool]. No one calls it a FILER. It’s a file, and usually a nail file. It’s not a great word no matter how it’s clued.

What I didn’t now before I did this crossword: that Tom Cruise’s role in the “Mission: Impossible” movies is Ethan HUNT and that XIAN was the starting point of the Silk Road.

If you’re like me and you prefer Stella’s chewy tough themelesses to her early-week puzzles, check out her blog and enjoy!

THEME: The word DAY has been added to common phrases to create wacky new phrases, each of which starts with a weekday. This explanation isn’t accurate: see post. 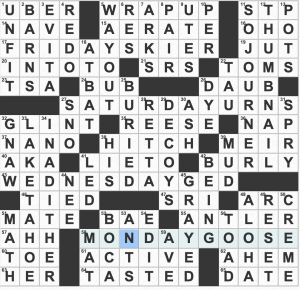 Well, I thought I had the theme down. Didn’t see it for most of the solve, but thought I knew what was going on at MONDAY GOOSE / MONGOOSE and then saw FRIDAY SKIER / FRISKIER and said “ok… DAY has been added to common phrases.” But then what of SATURDAY URNS / SATURURNS (which really feels like it should be SATURNS…) and WEDNESDAY GED / WEDNESGED … that looks like it wants to be… WEDGED? But for that to happen NES and DAY need to be removed…

The title seems to make sense with adding just DAY but I can’t make sense of two of the themers at all.

Okay… I just had to consult with someone far wiser than me, and she pointed out (after also assuming DAY had been added to phrases) that we should only look at the three-letter abbreviation for the day to determine the base phrase.

Hmmm. Boy I’d be lying if I said I enjoyed this one today. It’s just a bit difficult to make sense out of, especially since the simple DAY addition (a very common theme employment) works just fine for two. The title being abbreviated does suggest we should do something with abbreviations, but it’s hard to describe adding NESDAY and URDAY to two and just DAY to two others. Also, in trying to understand the theme, it certainly didn’t help that URDAY shares two letters with URNS.

Liked IN A DITHER! Reminiscent of Paul’s entry from two days ago: IN A LATHER.

Solved on web app. That never helps the experience. Forgot to download the .puz before I got to school, where I do not have access to that page.

2 stars from me today.

Another great puzzle today! Fun entries and clues, interesting grid, though a tougher theme and themers for me today. Still very enjoyable and a bit faster than my typical solve times. 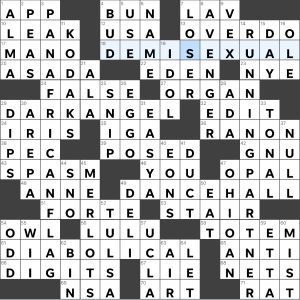 Theme: the food (or fare) DAL is split within each of the themers

Today’s theme was tough for me and I ended up at Sally’s blog to figure it out. DEMISEXUAL is great to see in a puzzle, though the clue initially had me thinking about “The Umbrella Academy”. DARKANGEL wasn’t a show that I watched, though I’d probably like it, but I knew she was in it. DANCEHALL and DIABOLICAL required crossings for me, though the clues are solid and may have been easier fill for other solvers. Based on the theme, I was looking for a split but fare misdirected me, since I only think of it as money (such as a bus or metro fare) and not food. In each themer, I found “D…L” but the moving “A” got lost for me, especially since I was looking for something related to a payment or money. In the first and fourth themers, the split is “D…AL” and in the second and third it is “DA…L”.

Stumpers: PANAFRICANFLAG (I solve on the mobile app so this down bonus entry was constantly cutoff and hard to see it all to fill since I didn’t know the clue right away so I needed crossings to complete it), ORGAN (first instinct was “voice”), and SPASM (“reflex” came to mind first)

I really enjoyed the gird design and the opportunity it made for two 14-letter down bonus entries in addition to the excellent four themers. PANAFRICANFLAG and RUNNINGPARTNER are truly impressive additions to this puzzle since it still feels very spacious yet connected. As for the trickier theme for me today, I’ve got to keep working on my sense for multiple meanings to help me understand them quicker, which can also be said for some types of clues as well—that misdirection, which I do enjoy, is something that I will watch out for to keep honing my skills on with future puzzles.