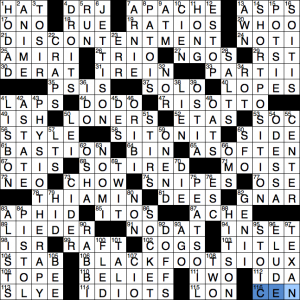 hello and welcome to episode #709 of matt gaffney’s weekly crossword contest, “Permutation Situation”. for this week 5 puzzle, the instructions tell us that we’re looking for a well-known American university. okay. what are the theme answers? i don’t know at all. there are four long answers in the grid arranged in a pinwheel fashion, so let’s start with those:

if these are theme answers, what do we do with them? the title suggests permuting or rearranging things, but i can’t see what that might mean for these clues or answers. i suppose it could mean we are supposed to anagram something, although “permutation” would be a somewhat weird way of expressing that. to me, it should rather connote rearranging words in a clue or answer rather than rearranging the letters in a word, although i’d be hard-pressed to explain precisely why i think that.

anyway, there’s no way to permute the one word DISCONTENTMENT or its one-word clue {Malaise}. this doesn’t have to mean the idea is wrong—it’s possible DISCONTENTMENT just isn’t a theme answer, or at least not one of the them answers we’re supposed to permute. but it’s certainly discouraging. in the other theme answers, perhaps “muscles back” -> “back muscles” (suggesting LATS) is an idea, but a) i don’t know where that idea is going, since LATS isn’t in the grid, and b) i don’t see other places to do that.

what else could we permute? i did have a thought that we might be looking for clues in the answers and vice versa, but if that’s what is happening here, i don’t see it. there were a couple of unusually blatant dupes between grid entries and clue words: {Mercy Corps et al.} NGOS and then {Part of NGO} NON, plus {Italian side} RISOTTO and {Smaller dish} SIDE. there are plenty of other ways to clue NON and RISOTTO without using NGO or SIDE, so this may well be deliberate… but on the other hand, it also might not. i’d love to find more instances if this is what we’re supposed to be looking for, but i didn’t see others.

one mechanism that occurred to me is a clue with multiple answers, only one of which goes in the grid. for example, i noticed that {Japanese word in a Clint Eastwood title} is the clue for IWO, which notably also could be a clue for JIMA, and {Part of USSR} clues SOC but it could certainly also be SOV—in fact i did try SOV first but it did not fit the crossing down entry, {Tallest player on an NBA court, almost always} CENTER. and speaking of the NBA, {NBA great who guested on an episode of “The Office”} was the clue for DR J, but it is also true of kevin MCHALE.

there are actually a lot of other clues that look like they could have alternate answers, but of course it’s often the case that crossword clues are not uniquely identifying. i did notice that {Tiny bug} APHID could also be a clue for {Stinging thing} BEE, which could in turn be a clue for BARB or something like that (but BARB isn’t in the grid).

well, i don’t have it and it’s noon. i don’t think the deadline was extended 3 hours, so i’m just giving up. i don’t feel i was ever on a right track with this one.