Title: “Just a Number”
Prompt: The meta for this puzzle is a famous musician.
Answer: Adele 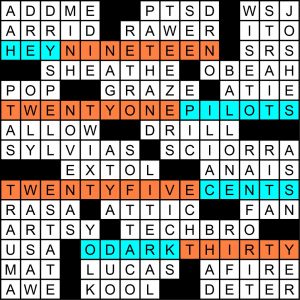 We had four long theme entries:

16-A: [Steely Dan classic with the line “She don’t remember the Queen of Soul”] = HEY NINETEEN
27-A: [“Blurryface” band] = TWENTY-ONE PILOTS
43-A: [What Carla Thomas claims Otis Redding doesn’t have in their duet “Tramp”] = TWENTY-FIVE CENTS
57-A: [After midnight but before the dawn, in slang] = O DARK THIRTY. Is this a legit entry? The Goog tells me that “Oh Dark Thirty” is the same as the “Zero Dark Thirty” of movie fame, meaning an unspecified time in the middle of the night. Is the ) there the letter O, as it’s pronounced, or a zero? If it’s a zero, then we have two digits in the entry, which is a bit odd, especially since one of them isn’t used. But if it’s the letter O, then it’s fine. I guess it has to be the digit, so slight ding there. Am I overthinking this? Possibly.

Took a deep breath, slightly panicked. 525 people got this so don’t overthink it…Oh, gotcha: those four numbers are the titles of ADELE‘s four albums, making her our contest answer. My wife even had her on Alexa for five or six songs while preparing dinner tonight so the universe was enjoying watching me struggle with this one.

Anyway, 1 for 1 and assume you are as well. We are all 1 for 1 in Decade 2 of the MMMM! Thanks to Pete for keeping things rolling, as these are a major highlight of the crossword puzzle universe. 4.15 stars.