Theme: The grid features the names of three oceans, each with the second half of its name “dropped” to the line below, as highlighted by the revealer A DROP IN THE OCEAN. 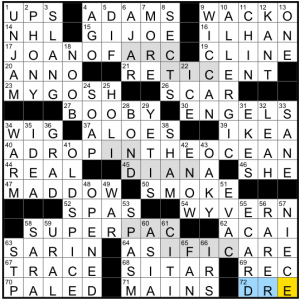 I like today’s crossword theme a lot! It’s a nice twist on a common phrase and made me think “that’s clever!” when I figured it out. It’s fortuitous that Evan was able to use the IN from A DROP IN THE OCEAN for a theme answer as well as a revealer, since that meant he didn’t need to take up extra grid space to have them both separate. All of the theme answer choices are solid, and I especially like how AS IF I CARE breaks up the back half of PACIFIC across three separate words.

I’m of two minds about the fill in this puzzle. On one hand, there were a lot of words that I was excited to see on a Monday because they’re more interesting than what we sometimes get, and I’m not just talking difficulty-wise: for example, all the down answers in the NW corner of the puzzle (UNJAM, PHONY, SLANG) are common words, but they have cool letter combinations and were satisfying to put in. Things like WACKO and BOOBY are also different from the norm, and the long downs of OLD SPICE and ALLERGIC are nice too (although it did take me a looong time to see ALLERGIC since I had “scab” instead of SCAR, and I didn’t immediately know ENGELS). Oh, and there are a bunch of women in this puzzle – ILHAN Omar, Patsy CLINE, JOAN OF ARC, DIANA Rigg, the biblical LEAH, and … SARA Lee? (so close, puzzle!) After last week’s nearly woman-less puzzle, this was a great change of pace.

On the other hand, some of those uncommon words I mentioned earlier cause tough crossings. Personally, this was the first Monday puzzle in a long time that I didn’t finish without Googling, thanks to the ENOW/WYVERN cross. I had no idea on the fantasy dragon (didn’t even know if it was from a specific thing or was just a generalized creature) and thought that [Sufficient, to Shakespeare] had something to do with the word “enough” (which maybe ENOW does; I didn’t check), so after running “f” and a few other letters in “enough” I decided I had had enough (haha) and looked it up. I’m not sure how that will play for other people – both clues did hit known blind spots of mind, and ENOW has been in the NYT plenty of times before – but for me, it was an impossible crossing. I also worry about SARIN down there in the SW – I’ve never heard of this and got it entirely off crossings. If someone doesn’t know STP or the URAL River, those consonants could be pretty much anything.

Sound off in the comments about how things went for you! Happy MLK day everyone. 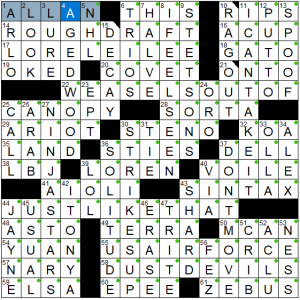 Have to be quick today, unfortunately. Real toughie for me from BEQ this holiday.

Big Minus: A CUP. I’d certainly like these to be gone from wordlists, but even limiting to this case, it’s really not hard to avoid this in this corner. PIPE/UCLA/TAUT gives you PUT OUT/PLUTO/EAT OF in the downs while preserving the longer entries, and there are plenty of other fill options if you don’t like one of those from this very amateur constructor.

Fact checking: I think you’d be hard-pressed to find someone calling it “The” CBC (5d). ZEBUS are bovines, not equines.

Congrats to Will on his USA Today debut!

Theme: The lowest part of each vertical theme answer is a fruit 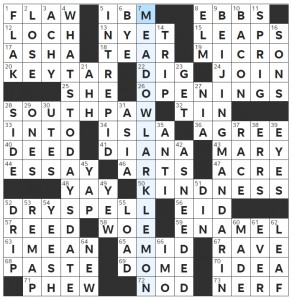 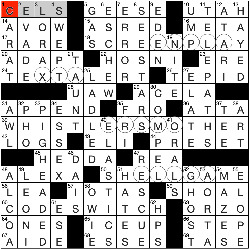 Monday regular Catherine Cetta is back with a theme that’s a bit more complex than usual for a Monday. The revealer at 60A is [Say “See you mañana, e.g. … and a hint to each set of circles], which gives us CODE SWITCH. Each theme entry contains circled letters that, when anagrammed, or “switched,” become a type of CODE:

This one wasn’t my favorite — I found the theme a bit overcomplicated — but maybe it’s because I’m not very good at anagrams. I also didn’t love some of the short fill, like HOSNI Mubarak, the partial AS RED, the plural ESSES, and the odd-sounding HAYED. On the other hand, PIGHEADED and TELEPATHS were fun longer nontheme answers. 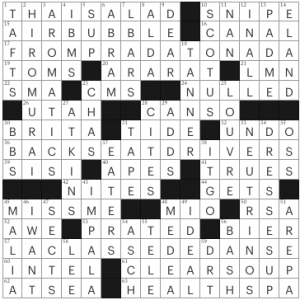 Apparently I am always going to forget to blog the New Yorker puzzle on Monday mornings without a calendar reminder. Calendar now set!

New to me: HIRO MURAI, FROM PRADA TO NADA. 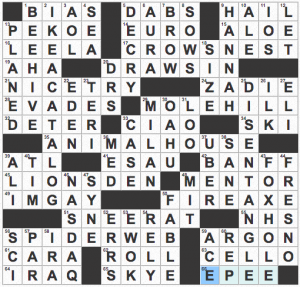 Theme: Words/phrases that are places animals can live that also include said animal’s name.