Theme: STARTING QB – Each theme answer is a two word phrase where the first word starts with Q and the second starts with B. 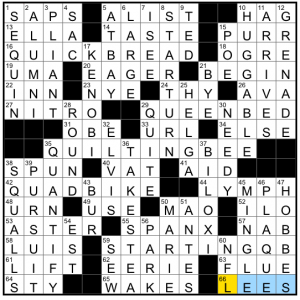 Today’s puzzle is a classic early week theme type (the NYT ran a similar one about a month ago with a MATCHING PJS revealer), but that didn’t keep me from enjoying the solve! I’ll run through each aspect of the puzzle that kept it feeling fresh to me:

Let me know your takes in the comments! And please leave suggestions about which of the remaining teams in the playoffs a sad Seahawks fan should root for from here on out.

Theme: Familiar phrases whose final words can also be used to refer to businesses. The starting words also change meaning to wacky effect. 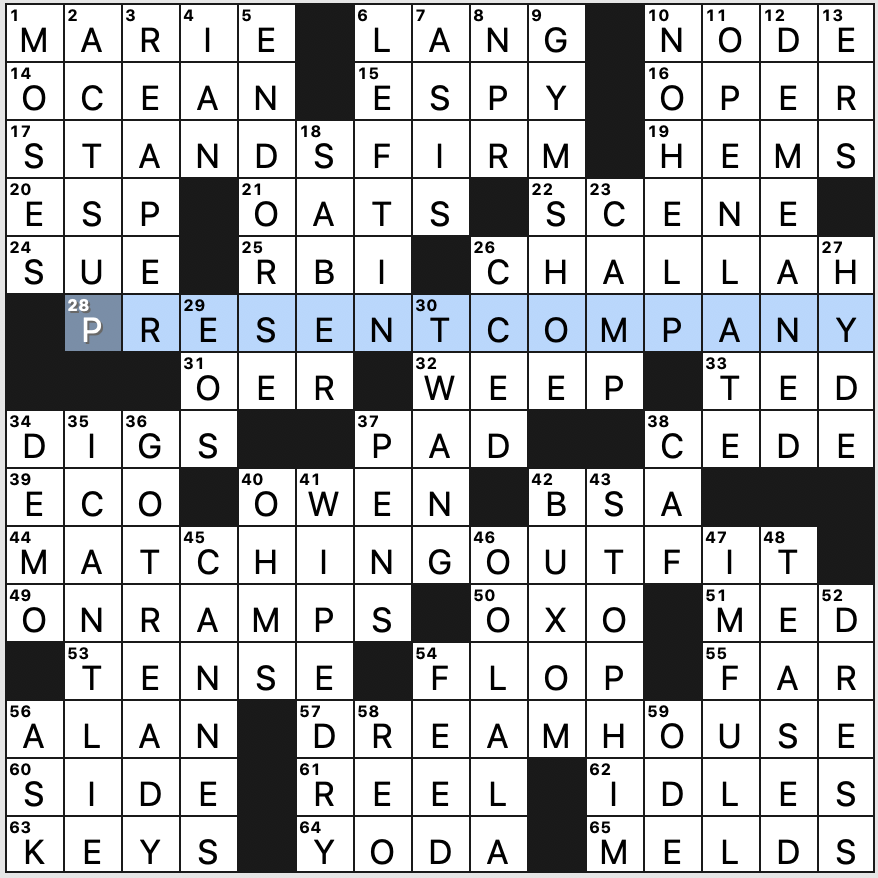 An easy-to-grok Monday theme, and a nice smooth start to the week.

My faves in the fill are OPEN LATE, GYM SHOE, CHALLAH, and “STOP HIM!” I’m on the fence with “I CAN’T LIE” which sounds more formal than the much more common “Not gonna lie.” 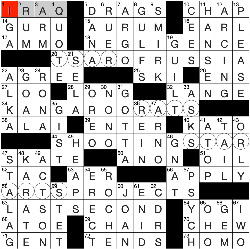 I might have been converted to a revealer advocate without realizing it. I know in plenty of reviews I’ve said of some puzzle or another that I would’ve preferred another theme entry to a revealer, but now I’ve solved this puzzle and I wish there were a revealer, perhaps in place of that fourth theme entry!

What would a revealer somehow tell us, if there were one? It would say, somehow, that the words in the circled squares — one per theme entry — are all anagrams of each other. I’ve italicized the words in circles:

Apologies to the constructor, but I have a few nits to pick here. One is that ART PROJECT gets about twenty times the hits that ARTS PROJECT does, so 58A felt contrived to me. The other is that two of the theme entries have the theme word at the beginning and two at the end. Symmetrical, yes, but I think a set could have been found with consistent placement. I also wasn’t crazy about AURUM, CDRS, CEES, RUER, A TOE, ALKA — definitely a few too many “glue” words for my taste.

On a personal note, I do not count ARNO as “glue” even though I know rivers aren’t a lot of people’s thing (hi, sorry, says the gal who’s put ELBE in a puzzle here and there). That’s because my husband of going on 13 years proposed to me on the banks of the ARNO in Florence. :) 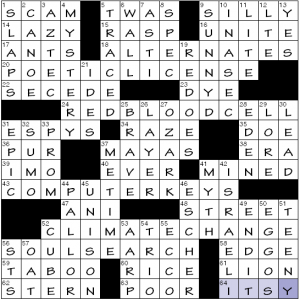 I definitely needed the title in addition to the instructions in the first theme clue to understand what was going on.

So with LICENSE, CELL, KEYS, and CHANGE alone I might not have been able to reason that all of these items can be found in one’s pocket. License in a wallet, which may in turn be in pocket. I don’t really call a phone an unadorned ‘cell’. The other two are more natural fits, to my mind.

Editor: Erik Agard & Mollie Cowger (!!! I believe this is the first time Mollie’s name is on the editing byline? Congrats!)

Theme: The last word of each phrase is a bill denomination 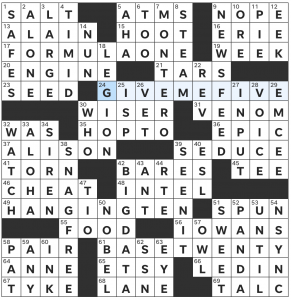 I am always impressed when constructors have a symmetrical grid and four theme answers in a USA Today puzzle! These are self-imposed constraints, since the USA Today doesn’t require them, and I find it very hard to build a grid around these when the publication is so strict about fill smoothness. It feels like the constructor is doing a little extra credit. Notes: 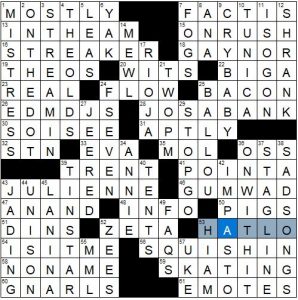 I’m going to depart from my usual template a bit with today’s BEQ puzzle, which I found generally on the quick-medium side of his offerings, certainly quicker than the last few weeks.

Through about 80% of the puzzle, it felt almost like a BEQ-Tim Croce hybrid; phrasal entries like ON WITH IT, IN THE AM, and ON THE DOT, conversational things like IS IT ME and FACT IS, and letter combos I’ve never seen in a grid before but have to admit aren’t *that* green paint-y in EDM DJS and F SEVEN.

(Side note; Tim Croce’s puzzles can be found at club72.wordpress.com. Definitely give a look if you like harder themelesses and corner stacks!)

But I really want to talk about the SE corner, where I almost gave up over four words I didn’t know: HIAM, HATLO, IMPASTO, and the “death spiral” in the clue for 59a [Sport with a death spiral]. It’s a hard area, for sure, made harder by my fixation on SKI- and inability to see SKATING at 59a, but I also had a number of options for both the 4th and 6th letters in IMPASTO.

What got me through was the extra hint for HIAM at 53d [“Succession” actress ____ Abbass (or with the vowels swapped, “Women In Music Pt. III” band)], which got me off SKI- in the crossing entry (as I had the -I- and the vowels needed to be different) and set me looking for four-letter band names ending in -IM. I don’t know the album in the clue, but I’ve certainly heard of HAIM. That left the HATLO/IMPASTO crossing, which is the most dubious and probably wouldn’t fly in a newspaper puzzle (and certainly not in a tournament), but it’s not the end of the world to cycle through A/E/I. It would be nice if the correct answer were a little less up in the air — were this a tournament puzzle, I’d’ve wavered between IMPiSTO and IMPASTO and ultimate just coinflipped — but it’s not completely un-inferrable.

Lastly on this area, credit to all those entries coming from different knowledge bases: sports, television, music, art, comic strips. It’s possible that I had a tougher time than most, especially after struggling with the clue in my usual wheelhouse. 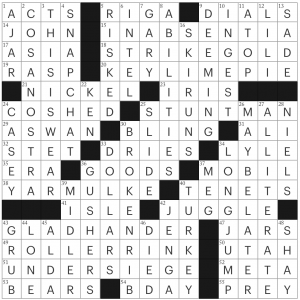 I wasn’t trying to speed through this puzzle, but found myself filling in so many Across answers in order, it felt much easier than expected for a challenging Monday New Yorker puzzle. Anyone else find it particularly unresisting?

Re: ALLITERATE: On the Hulu show Letterkenny, about once each season an episode starts with several small-town farmers rotating through runs of alliteration. There’s so much fast-paced verbal play in the script—an unusual show and one I’m enjoying. (Video clip below includes the F word in the F alliteration.)

Toughest clue for me: [Spoken name of a 1971 heist film whose title is a single non-alphabetic character], DOLLARS. Don’t recall the movie, didn’t connect “heist” with $ when I had the DOLL in place.