Hello from my Wi-Fi hot spot! We had a gnarly windstorm here in LA last night and our internet is still down, so technology and 5GE to the rescue. (Thankfully, just a few shingles blown off the roof and some branches in the yard – otherwise, we’re good!)

Today’s Sunday NYT collaboration between Nancy Stark and Will Nediger flips our expectations a bit, turning “A of B” phrases into funnily clued “B of A” phrases: 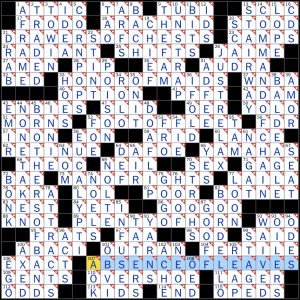 21A: DRAWERS OF CHESTS [Artists sketching pectorals?]
33A: HONOR OF MAIDS [Vow to remain mum about hotel guests’ secrets?]
52A: FOOT OF FLEET [Small distance covered by a naval armada?]
73A: MAN OF RIGHTS [Boxer lacking a left hook?]
89A: PLENTY OF HORN [What brass band music has?]
107A: ABSENCE OF LEAVES [Tree feature in winter?]
14D: COMMAND OF CHAIN [What a dog walker and a strong-willed pooch might vie for?]
45D: BROTHERS OF BAND [The Bee Gees’ Barry, Robin and Maurice Gibb?]

This was a fun set of themers – I especially liked PLENTY OF HORN and COMMAND OF CHAIN (why, yes, I do have a strong-headed pup, how did you know?). :)

Random thoughts:
– 9A: TUBI [Streaming service acquired by Fox in 2020] – I’ve genuinely never heard of TUBI, which might be another marker that I am old.
– 43A: ENBIES [Nonbinary people, informally] – ENBIES comes from the pronunciation of the “NB” abbreviation for Non-Binary. I loved seeing it in the puzzle!
– 98A: SOD [Old ___ (motherland, affectionately)] – I was disappointed to see this remain in the puzzle after I made a note of it in my test solve. Unless you’re talking about grass, SOD always derives back to being a derisive truncation of sodomite, even when it’s said “affectionately” as it is here. As someone who has been derisively called a sodomite one too many times in my Southern upbringing, I always grimace when I see it in puzzles. For more, see noun 2 here: https://www.etymonline.com/word/sod (and please don’t “well, actually…” me here, I beg of you).

[Edited to add: As folks have well actually-ed me in the comments, it looks like I was mistaken and that this version of SOD does refer to grass? Even still, it does make me wonder, as pannonica points out in their comment, about the weight of trauma around words that can have one innocuous meaning and another awful one. Sorry all the same to any queer folks who may have also been irked at seeing this word in the puzzle today.]

That’s all I’ve got for now – what did you think about the puzzle? Which were your favorite themers? Let us know in the comments section. Be well and have a lovely week!

Still celebrating the New Year in a way with a ball drop (sans countdown)! Either that or we’re celebrating our errors. That’s probably more likely. I made a lot of ’em in this puzzle. 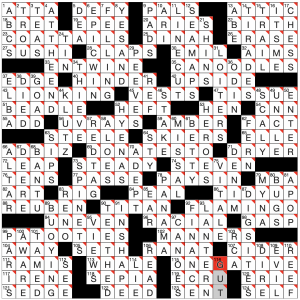 I consider anything WaPo puzzle that takes me over 20:00 to complete “very difficult.” This one clocked in at 19:59. So… still pretty damn tricky. There is A LOT to like about this extremely elegant presentation.

First of all, there are no other O’s anywhere in the puzzle outside of the themers (or at all, in a sense). The fact that I really didn’t notice it until I had finished is a testament to the fill itself since it never really felt forced (or not in a way that I had noticed).

Next, the absence of O’s or the presence of O’s still allows for proper crossword fill no matter what. This is to be expected of Evan, but I mistakingly thought this was the new standard for any type of gimmick that would involve skipping over letters (or something of that ilk). Wrong. I solved a similar concept in another publication somewhat recently and winced because it didn’t pull it off Birnholz-style. WaPo solvers are spoiled.

Also, the two entries whose two consecutive O’s are dropped (trying hard not to refer to them as the “balls” of the entry, though that’s what the title is making me want to say) are symmetrically placed (PATOOTIES / CANOODLES) and are both equally adorable words. The central crossing, DONATES TO / DNA TEST, also shakes two O’s but it still feels balanced as it’s in the center.

Took me a while to see the base phrase DONATES TO. I parsed it as DONA TESTO and thought it was an opera, or a famed Italian restaurant. Seriously.

I’m short on time, so that’s all I can offer for right now! Will update with some snags I hit later if I can squeeze it in.

A good title and a good revealer set up this lovely grid. The revealer is LEAVES NO STONE UNTURNED (99a, [Does everything possible, or a theme hint]). The other theme entries are familiar(ish) phrases that hide precious stones (written backwards) within.

Oh, hey. This puzzle has circles but no awkward 50-word clues. I’m pretty certain I’ve blogged a similar Universal Sunday grid in the past that featured circles as well, and yet the daily Universals still have solvers counting squares. What’s the deal? Their software only works on Sundays?

And now back to our regularly scheduled programming: 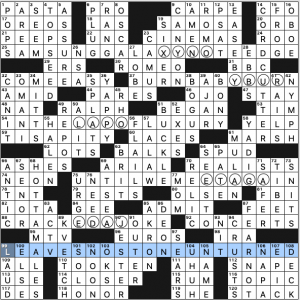 These are all nice finds, and even though I cottoned on to the theme after the first entry, I enjoyed piecing the rest together.

FROG legs in the dish swikee

Theme: The first letter of each phrase in the theme answers spells out GOD and essentially drips down the puzzle (since all are Down entries), connecting to the “rain” of the puzzle’s title. 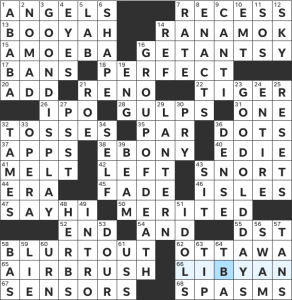 I thought that this title made the puzzle particularly fun and creative. If you were to highlight each first letter in the theme answers, you’d have a cascade of G-O-Ds running down the puzzle, looking like run. Plus, because the theme answers are tiered, with GO ON DISPLAY beginning higher than GROUP OF DEATH, which starts above GOOD OLD DAYS. I really enjoy enjoy Down-themed puzzles, and this made for an additionally fun one.

Have a good week!

THEME: Phrases where the first word is a synonym for winter-like weather 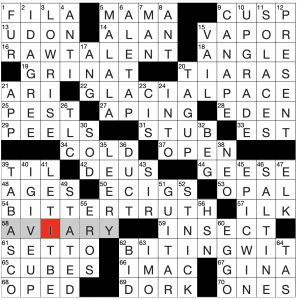 Wanted SNAILS PACE and BITTER PILL. BITING WIT is an unfamiliar phrase to me, I think. Of course it makes sense- just don’t think I’ve heard it.

Other new stuff for me:

I think that’s it. Felt like more during the solve.