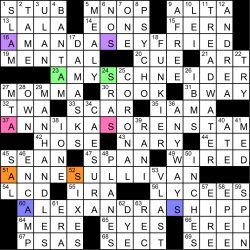 Hello there, everyone! I hope all of you are doing great as we wind down the first month of 2022!

We have five amazing women featured in the grid who all share at least one quality: their first names start with the letter “A” and their second names start with the letter “S.” Knowing the constructor the way I do, I’m sure she might have been rooting for the No. 2 women’s tennis player in the world, Belarus’ Aryna Sabalenka, either at last year’s US Open (semifinalist) or at the Australian Open that’s currently going on so she could be added to this list. Alas, Aryna lost in the Round of 16 last night.

Those lovely paralleling 10s were also a highlight outside of the amazing women, with TREAD WATER (11D: [Stay afloat in a moat]) and MANHANDLES cutting through three of the theme entries (29D: [Treats roughly]). Almost all of the entries that cut through three themes were great fill, with DAMASKS reminding me of the time I watched a video of how swords were forged from damask steel (17D: [Pattern upholstery fabrics]). Those without a classical music background might have been put off by the VLAST partial (53D: [Má ___” (set of symphonic poems by Smetana]), let alone crossing that with a French word, LYCEES (56A: [French schools]). My EYES are still trying to recover from the bonkers football game last night with the Buffalo Bills and Kansas City Chiefs, which pretty much has spoiled me from watching any more American football games for the rest of this season (65A: [Peepers]). Alright, time to head out and dive into another chicken dinner of mine: grilled chicken strips with Cajun-style dirty rice …yes!!!

“Sports will make you smarter” moment of the day: BANTAM (4D: [Boxing weight class]) – A combat sports weight class named after chickens? Let’s do it! In boxing, the bantamweight class is for fighters between 115 and 118 pounds, and in mixed martial arts, the class constitutes of fighters between 126 and 135 pounds. Then there’s the English soccer team Bradford City A.F.C., whose nickname is the Bantams. (A bantam is depicted in its logo.) Though normally a lower division side in the tiered English Football Association, Bradford City made a surprising run to the League Cup Final in 2013, when it was in League Two, a.k.a. the fourth tier of English Football (behind the Premier League, Championship and League One). The Bantams defeated Premier League sides Arsenal and Aston Villa in the quarterfinals and semifinals, respectively, before losing to Swansea City — at the time a member of the Premier League as well — in the final.

Hiya, folks! Jim P here sitting in for Amy. Let’s see what’s on the board for today.

Well, whaddya know! Board games. Each theme answer is a double-feature of common board games clued wacky-style. 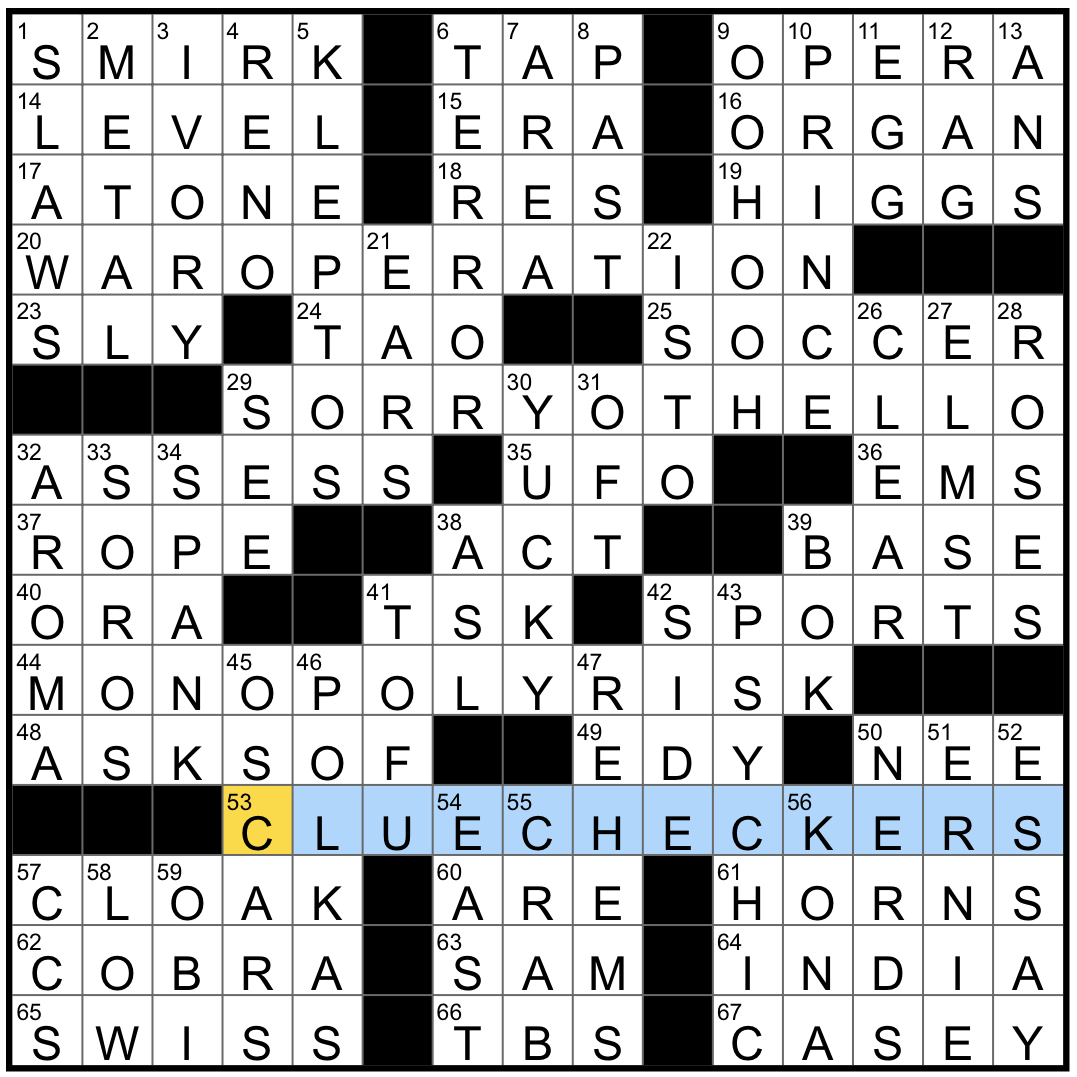 Cute. I will admit to finishing the grid without grokking the theme, mainly because I was solving for time. I’m not a speed solver and I know I never will be, so my enjoyment from a puzzle mostly comes from the grid itself and not my (in)ability to finish in a certain amount of time. So I had to stare at the theme entries for a few moments post-solve to get the aha moment.

And how apropos for me. We recently (for Christmas) splurged and got a game table so we can have longer game sessions without messing with the dining table. It’s one of these. The kid does her homework on top, but when it’s game time, we remove the leaves to reveal the gaming area below. So far we’ve only had one game night, but it was a pleasure to play at the table. What game, you ask? Pandemic, of course. (Wife’s a doctor, and that’s all she’s been wanting to play since forever. That didn’t help; the pandemic won. 😔)

Oh, I would be remiss if I didn’t mention this is a debut for both constructors. I took a peek at the Wordplay blog to learn they are a husband-and-wife team. Nice job!

Hmm. Not a lot of long fill to enjoy, but there sure are a lot of Ks in the grid: KLEPTOS, YUCKY, POLKAS, SPANK. Let’s move on to… 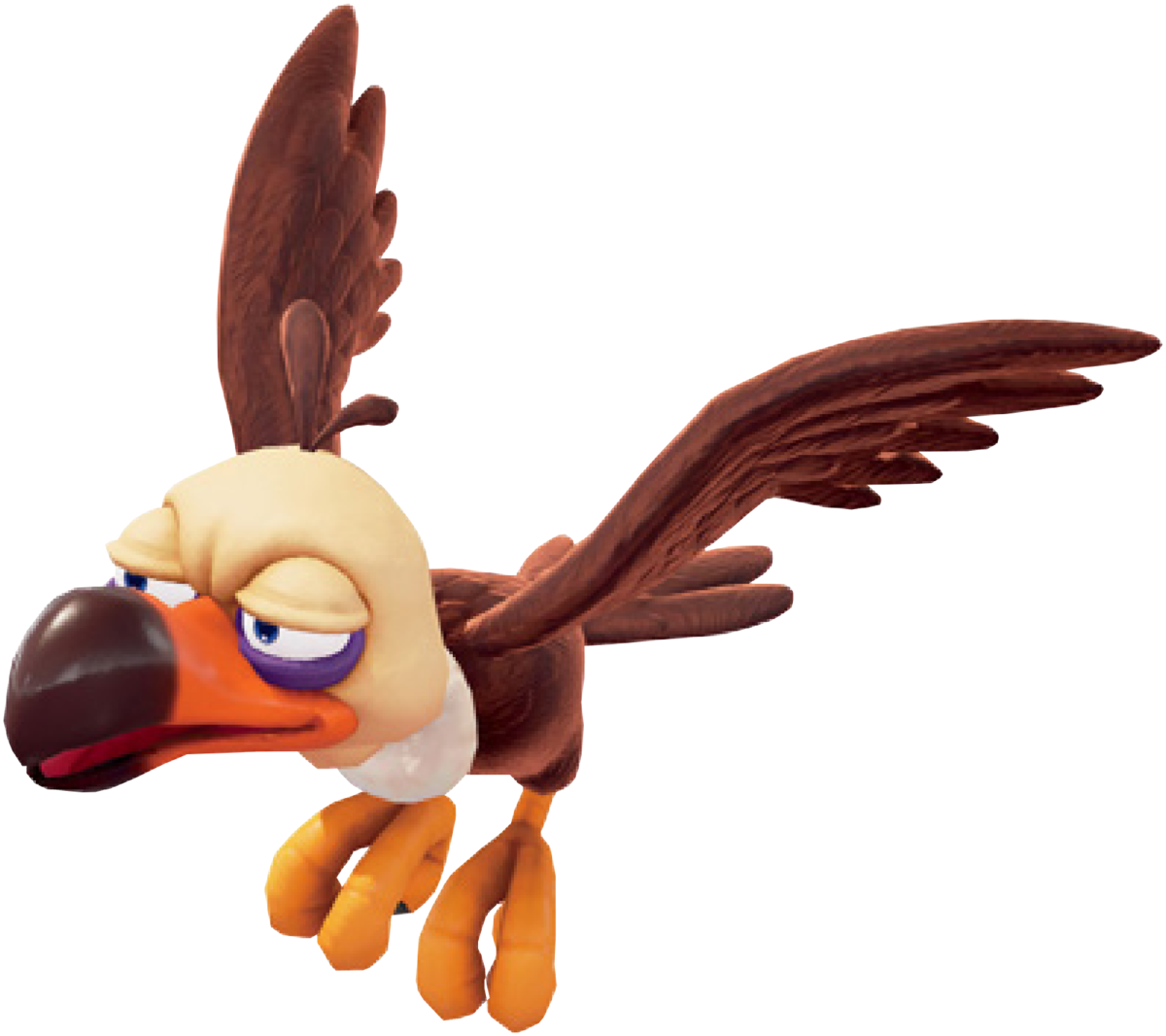 A Klepto from Super Mario Odyssey

An enjoyable grid. I would’ve liked a bit more sparkle in the fill, and the one inconsistency in the theme entries still irks me, but I liked it nonetheless. 3.5 stars. 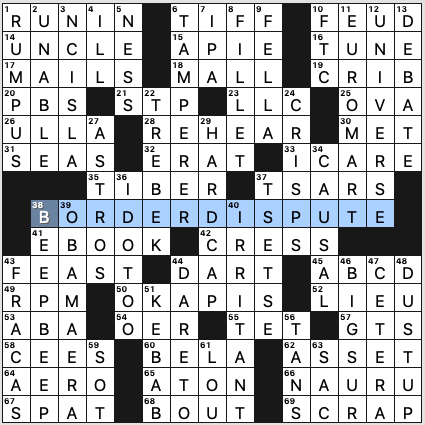 The revealer is in the center: BORDER DISPUTE (38a, [Root of territorial conflict, and a hint to this puzzle’s perimeter]). All the words on the grid’s perimeter are synonyms of “confrontation.”

Proceeding clockwise: RUN-IN, TIFF, FEUD, DEBATE, DUST-UP, SCRAP, BOUT, SPAT, FRACAS, and RUMPUS. I don’t doubt that last one, but my only experience with that word is in the phrase “RUMPUS room” which must mean something different than a room for a [Heated controversy].

I don’t think I’ve seen a theme like this where the edge words are all synonyms. Often, they’re words that precede or follow another word. But this feels like a tougher constraint to meet, so I’m impressed that our constructors managed to find enough synonyms of the right lengths to meet their needs, especially at the corners.

Perimeter themes like this one, especially with a central revealer of an awkward length (13 letters in this case), put a lot of constraints on the the grid. So it’s nice to see some juicy long entries in the fill: BEEP BEEP, OBAMA ERA, EUROMART, UNIVERSE, and BIG SUR are all nice. Sure, there’s TAMPERER, CETERA, CEES, and whoever ULLA is [Max’s secretary in “The Producers”], and the fourth and twelfth rows of four three-letter entries each aren’t pretty. But I felt the fill is quite good considering the constraints. 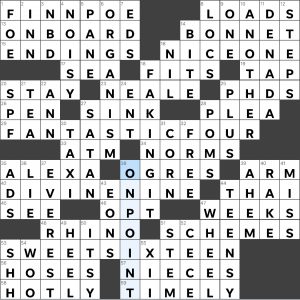 Theme: the second word of each themer is a “perfect square” (the product of two equal integers, or a number times itself)

The title probably should have tipped me off sooner to numbers but instead of taking it as a phrase, I focused in on the second half and had my mind set on shapes or parts of a square. The themers took me a while to fill in, but I figured the theme out once I had the final one in place since 16 is a classic perfect square example. NICEONE has cluing that made me think along the lines of something with “ha ha”, which seems to have cropped up in more puzzles recently. FANTASTICFOUR is probably an easier themer for superhero fans—I know just enough that once I started getting a few crossings then I was able to fill the rest in. DIVINENINE is a great phrase, though new to me; with this one, my sense of the theme started to change. SWEETSIXTEEN has a fun clue though only seeing snippets of the show, I also needed crossings to get me started but then was able to complete the rest easily and realize the number theme. The themers are also in order: 1, 4, 9, 16.

Stumpers: BONNET (still currently in use?), TAXI (I was thinking about car makes), and TEA (the clue pairing had me stumped—now I know about cheese tea and want some!)

Though it was one of my longer solve times, I kept making steady progress, filling in pieces here and there then building out until finally everything came together. This is just the right amount of challenging that I enjoy most—tough but not impossible and I could fill everything in myself, though many entries needed other crossings. Many of the clues were slight misdirections for me, which is probably why it took me so long to puzzle them out, which I found just doable and thus very enjoyable. A great theme with excellent clues for the fun themers, too!

I grokked the theme immediately and enjoyed the revealer. There are six sets of circles in the grid and the central entry at 37a tells us why: [Freight train components….or a hint to each group of circled letter] are BOXCARS. Cars in a box. Cute! 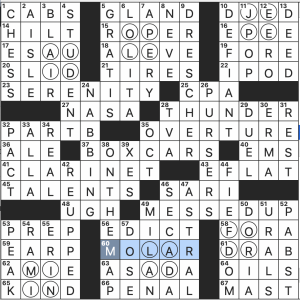 The six cars that make up our train are:

Turns out LADA is a Russian car manufacturer with an English-language website. I didn’t delve deep enough to see if they’re sold outside of Russia. That’s pretty obscure, but we didn’t need to know it because the cars aren’t clued and the crossings are fair for a Tuesday (although the DA is part of John SECADA, so that might be an issue for some folks). Overall I liked the theme. It’s an impressive construction – figuring out how to create the four boxes, make them symmetrical, have all the car models read clockwise from the upper left, and include the central revealer. There was only one eyebrow-roller in the fill. I’ll take that for a theme this unusual and creative. Bravo!

What I didn’t know before I did this puzzle: see above re: LADA. I also did not know that John SECADA was born in Cuba.

THEME: Phrases that have the word TIME in them, but TIME is anagrammed to be other word/words and wackiness results… sorta. 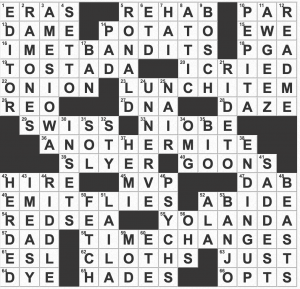 The theme is actually very clever, though it took me a while to grok. I think it took more TIME for me to suss out because the theme entries are not clued with a ? at the end (which totally confuses me). Aren’t the resulting phrases not in-language? And therefore most definitely deserve the ? treatment? But… LUNCH ITEM is, I believe, an in-language phrase (or in-language enough), so… that made it more confusing.

I did not notice TIME anagramming until the very end revealer, but that made it fun to figure out what I’d missed. Another little AHA as I realized the base phrases all made sense with the word TIME. I was unfamiliar with TIME BANDITS as a base phrase. Looks like a a classic John Cleese movie that eluded me somehow.

Some new things for me in the puzzle made it more difficult than normal. Didn’t know BOSCH and had CON for BAN, and with TIME BANDITS being unfamiliar, it made that area very difficult.  LAILA Lalami, YOLANDA Adams, and PEPITA also gave me some trouble.

Fun clue for READ ME [File type hidden in “gingerbread man”]. I mean, it’s not apt at all, but it’s a pretty epic phrase to hide in a phrase.