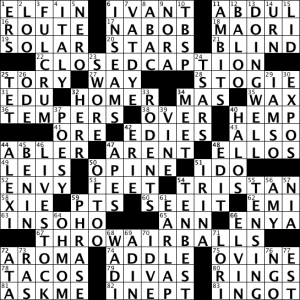 hello and welcome to episode #712 of matt gaffney’s weekly crossword contest, “Which Side Are You On?”. this week 4 puzzle is, curiously, only available as a PDF, and the instructions tell us we’re looking for a five-letter verb. what’s the theme? i don’t really know. why is the puzzle PDF-only? i think i do know, but it’s not for the usual reason that there’s something funky happening with the grid or clue numbering. rather, it’s just one really, really long clue: {Paula who sings “Lost in a dream / I don’t know which way to go / You aren’t all that you seem / And baby I’m movin’ way too slow / I’ve been a fool before / Wouldn’t like to get my love caught
In the slammin’ door / How about some information please” and “I take two steps forward / I’ll take two steps back / We come together ‘cuz opposites attract / And you know It ain’t fiction, just a natural fact” and “Baby just remember I gave you my heart / Ain’t no one gonna tear us apart / He could promise the moon and the stars above / Even if he promised me the world / Just remember I’m forever your girl” and “He’s a cold-hearted snake / Look into his eyes, uh-oh / He’s been tellin’ lies / He’s a lover boy at play / He don’t play by the rules, uh-oh / Girl don’t play the fool, no”} for ABDUL.

what is going on with that? those lyrics are from, respectively, “straight up”, “opposites attract”, “forever your girl”, and “cold hearted”. those are, i guess, the four most famous paula ABDUL songs, but of course, it’s totally gratuitous to quote from four different songs, or even to quote so extensively from any one of them.

now, it’s definitely suggestive that one of the songs is “opposites attract” in light of the puzzle’s title. and “straight up” could also be a cryptic hint to look at words that read upwards in the grid. but i don’t see anything noteworthy reading upwards in the grid, and i’m not sure what to do with “forever your girl” or “cold hearted” (okay, it could words with a C in the middle, of which there are three, but i don’t see what to do with them).

i guess there’s one other noteworthy thing about the PDF, which is that every column of clues breaks in the middle of a clue, which is not usually how crosswords are laid out. there’s also a notable lack of indentation on the second and subsequent lines of clues that are more than one line in length, which made it quite difficult to actually find one’s place in the clue list while solving. okay, this is interesting, and quite possibly clueful; i don’t usually print out matt’s PDFs, but looking back through previous weeks, it’s definitely unusual to have clues broken across a column and to have no indentation. so it could well be that the hint at the meta mechanism could be embedded in the page layout somehow.

is there some way to tie the two things together (page layout and paula abdul songs)? i don’t see it. the orphan/widow clues are:

i guess it might matter that NIA long is another NIA and “long” is the opposite of “short”? but that doesn’t seem to be going anywhere.

well, i’m stumped. looking forward to seeing in the comments what i missed.