Theme: PARTING WORDS – Each theme phrase is a two words, split across two answers. When combined, the end of the first word and the beginning of the second word form a word that means “goodbye” – so the parting words are literally “parted” by a black square, get it? 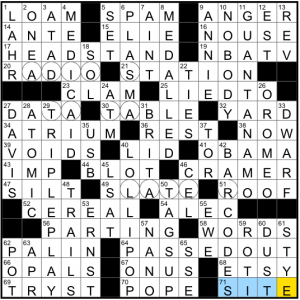 Coming up with this theme set must have been tricky for two reasons: First, the phrases must contain a word that means “goodbye” that spans both words. But then, for symmetry’s sake, the answers must not only be the same length in total, but have corresponding word lengths (like how DATA TABLE is a 4 letter word followed by a 5 letter word, and SLATE ROOF is a 5 followed by a 4). For that reason, it’s understandable that there are only three theme phrases, and that they are solid but not incredibly sparkly. My favorite answer was RADIO STATION, because it breaks up “adios” in an interesting way. SLATE ROOF was my least favorite, because that first word could have been anything to me – luckily the circled theme answers act almost as a second clue.

I’m not sure about the wording on the revealer clue. The circled letters are certainly parting words, but isn’t the black square between them what’s doing the parting? In general I think the double pun works, but there may have been a better way to explain it.

Back to the NFL playoffs for me! Happy Monday all. 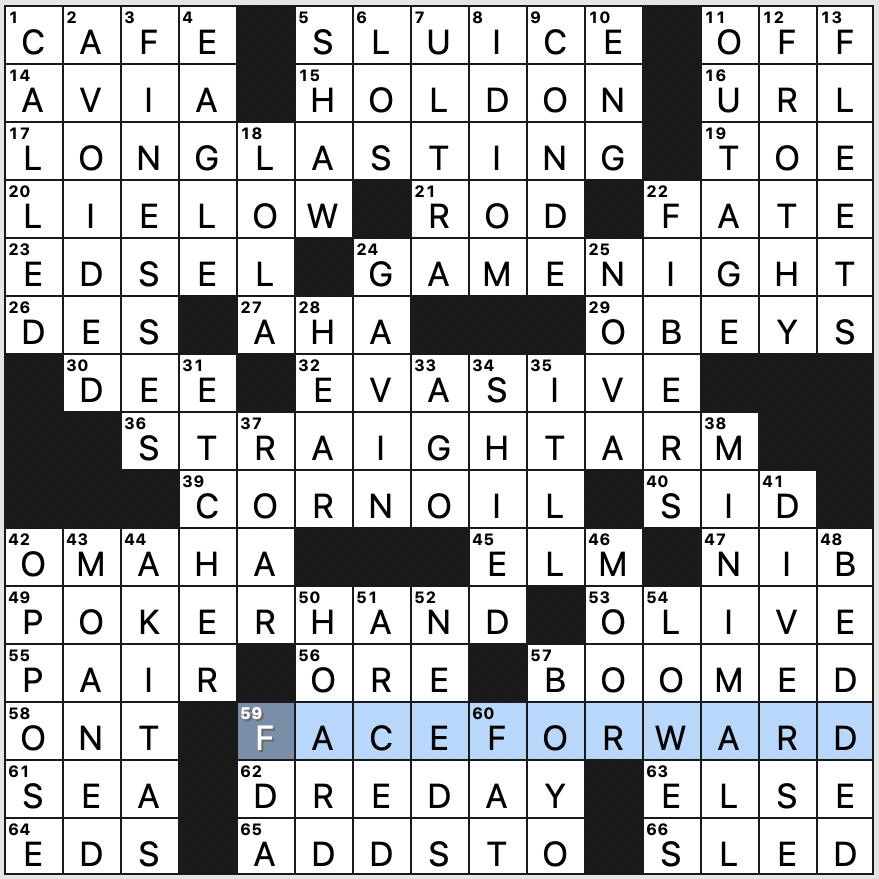 Pretty standard word-following-another-word type theme. It works well enough, and the entries are fun and evocative.

Fill is clean if not especially exciting. I liked FINESSES, MINI MALL, LIE LOW, and “HOLD ON!” Didn’t know the 1993 rap song DRE DAY, and I had to stare down that crossing with 57d [Laddie] before the Y fell into place in BOYO. Other than that, a smooth solve all around. 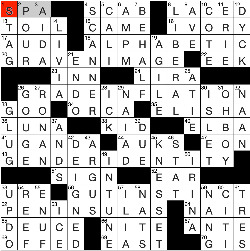 This is a rather uncomplicated theme that I’m nonetheless glad has a revealer, because I spent a little bit after I solved the puzzle trying to figure out what these things had in common before I figured that there must be a revealer, found it at 70A, and then went, “oh, duh.” 70A [USO show audience … and a hint to the answers to starred clues] is GIS, or more clearly, GIs, which on its surface refers to soldiers but in the puzzle points us to the fact that each theme entry is a two-word phrase whose initials are G.I. Like so:

I like the theme entries; there’s a good amount of thematic material and they’re all phrases that are totally legit yet that I don’t feel like I’ve seen in puzzles before.

But, this puzzle got me thinking about a nuance I hadn’t really paid attention to until fairly recently, when I started to get this comment from editors as a constructor myself: matching the difficulty of the fill to the complexity of the theme. “Phrases that have the same initials” is a pretty straightforward theme device, and it makes perfect sense that a theme like that would run on a Monday. But this puzzle has quite a few entries that IMO would be fine later in the week but not so much on Monday: LIVIA, Anthony van DYCK, ILIA, LIRA (as clued, although I think it could be clued a bit easier), ARGUS, CALI, IRINA Shayk. RONAN Farrow and KNESSET might also fall into this group.

So I think there’s a mismatch between the theme and the fill and I’m curious how this affected other more casual solvers, especially since some of the harder answers are in my wheelhouse (supermodels! ancient Rome! Greek mythology!) and therefore didn’t slow me down. 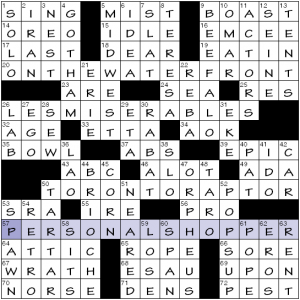 Wasn’t quite sure what the theme was as I was solving, but the final theme entry has a helpful indicator tacked on. So let’s do them in reverse order. (54d [Backward: Prefix] RETRO-)

Half the time these trigrams sound the same, the other half they don’t. Works for me!

After perusing the acrosses and not really finding any individual clues to highlight, I’m struck my the overall smoothness of the fill and the gentleness of the clues. A very good introductory crossword. 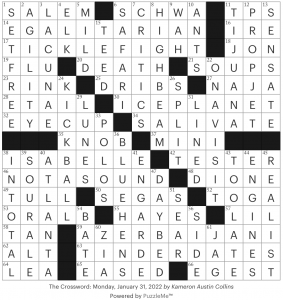 When you see Kameron’s byline on a Monday New Yorker, you know you’re in for a challenge. Not a Saturday Stumper level challenge, though—just a Saturday NYT level.

Fave fill: EGALITARIAN, TICKLE FIGHT, ICE PLANET (this part of Earth feels like one!), ISABELLE Adjani, Scrabbly AZERBAIJANI, TINDER DATES (the clue, [Meetups between right-for-each-other people?], alludes to the “swipe right” yes on Tinder, and not right-wing politics; the question mark had me wondering if I needed a right-wing dating site in the mix), KICKBALL, HIGH BEAM, and TIJUANA.

Questionable fill: ON A VISIT feels contrived to me, not idiomatic, and I’m not entirely convinced that “NOT A SOUND!” works without additional words (“not a sound out of you,” “I don’t want to hear a sound”).

I love when the byline says “puzzle by erik, edited by erik,” it reminds me of that image where a dog is holding its own leash and walking itself. Look at this asymmetric grid!! You’ve heard of Utah Blocks, now get ready for whatever that monstrosity is in the lower right corner. This puzzle has three of my favorite shapes though, The Humble T, The Flying Dove, and The Hinge (although I won’t lie, I prefer a symmetric hinge). 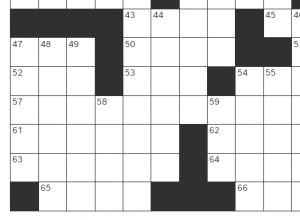 Anyway, onwards: the theme of this puzzle is that there are vertical answers that are topped with double letters. This ties in with the “revealer” of TWO STORIES HIGH, and the “stories” aspect of that ties into the title, “Narrative Structure.”

This was a hard one for me (about six minutes, vs my usual four minutes), lots of vocabulary in the clues that I was unfamiliar with. I logged onto Fiend expecting to see a 1-star rating (What I like to call a “This Puzzle Had References To Other Cultures Rating”) but it was actually slightly higher. (And now, higher still– any time a puzzle has a low rating, I try to boost it with a five star rating, since it’s such an inherently meaningless scoring system.) (One day I’ll go rogue and delete ratings from all the posts, but until then, I’ll merely loudly complain about them :D) 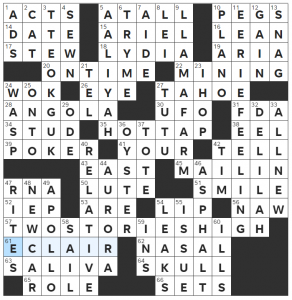 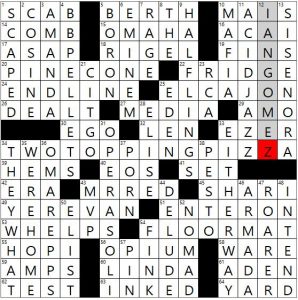 It’s been a long while since a BEQ puzzle has taken me this long, and I’m not certain it’s much more difficult than his usual – I just seemed to consistently gloss over the one or two more accessible (to me) entries in a given area, only for it to suddenly make sense. That happened four times.

Highlights: HALFLINGS, EL CAJON, EITHER WAY as a conversational entry [33d – “I’m flexible], the marquee spanner TWO TOPPING PIZZA [34a Classic pie order] which absolutely *stymied* me (“a two-topping pecan is NOT a real pie, come on BEQ”), and especially, especially THEY WHAT [34d “The kids did that?”], which is just a joy.

I have a quibble with [A low one can cool off bats] for 42a ERA. Feels like that’s out of order a bit; a low ERA isn’t the thing cooling off the bats of hitters, rather it’s a reflection that a pitcher has done it in the past. Some of my slowdown was a reluctance to enter ERA there, for sure. The AMO/EZER/IAN GOMEZ area was another notable slow area, though sussing out ACID JAZZ and actually committing to RCA helped enough to clear out that area.