Be careful as you work your way around today’s New York Times puzzle, or you might end up like this unfortunate contestant on a recent British dating show. 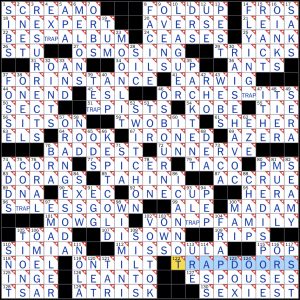 I liked this trick because it was accessible enough for folks not used to tricky puzzles to be able to recognize, but sophisticated / well-executed enough for even the most seasoned of solvers to enjoy. TRAPPISTS was new to me (I’m allergic to alcohol!), but the other themers were fun. I especially enjoyed the clues for BEST RAP ALBUM and STRAPLESS DRESS.

Random thoughts:
– I was surprised to see DORAGS spelled in the puzzle with an O instead of a U, especially given the 2018 New York Times own article on the very subject by Sandra E. Garcia. From the article: “Merriam-Webster renders it as ‘do-rag,’ observing that it is a rag used to protect a hairdo. On the other hand, anyone who has ever worn a durag spells it durag.”
– I did enjoy seeing OSMOSING at 27A. My students often put their heads against their notes right before a test, hoping for some movement of information in their favor.
– My favorite clue of the puzzle was [Subj. for some future bilinguals] for ESL. Usually, ESL (English as a Second Language) is a class usually framed as being for an immigrant coming to the US (or other English-speaking country). What often gets left out is that, even in those cases, the folks in ESL classes already know at least one other language and, with it, the complexities, idioms, and richness therein. I really liked the framing of this puzzle’s clue in that it reminds the solver that English, for many folks learning it, would be at least their second language.

What did you enjoy about the puzzle? Let us know in the comments section!

THEME: Word substitutions from phrases that follow the formula _____ IS ______ 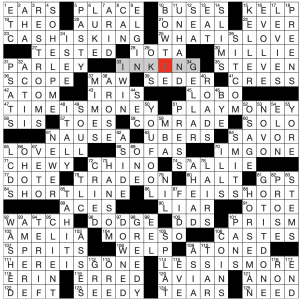 Cool theme! Took me a long time to get enough of a foothold to suss it out and figure out what was going on. My time says otherwise, but this one felt much harder than last week’s puzzle. Just felt like I couldn’t complete enough of one area to garner any sort of confidence. That’s also what made the puzzle quite excellent for me. A lot of suspense was built because I had almost half of the puzzle filled (sporadically) before the (excellent) AHA moment.

I was actually rather stunned when Mr. Happy Pencil showed up, largely because I had no idea what TERRIF was and it crossed three unfamiliar words/names for me: ERIN, AMELIA, and SPRITS. The clue for TERRIF was [Marv’s relative?], and as much as I tried, I couldn’t help but think of Marv as a person’s name (which is exactly what the clue is aiming for). “Marv” in this case is short for “marvelous” just as TERRIF is short for “terrific.”  Anyone else get hung up there?

Felt fairly name heavy (MORESO than usual, anyway… but I think that’s how it felt at the time rather than how it actually is). Proper nouns are often the source of stumbling blocks for me in the WaPo.

Favorite fun fact in the puzzle is that FIDO means “faithful.” Who knew? Has anyone actually met a dog named FIDO?

Very cool, of course, that all of the substitutions don’t simply result in nonsense, but in valid crossword fill. Expected from Evan, yes. But always worthy to note.

Really enjoyed this one and the challenges it posed for me.

I sailed through this without appreciating the theme. But I did appreciate the smoothness of the grid which was lovely.

The theme turned out to be quite lovely as well. The revealer is GET THE SHOW ON THE ROAD at 65a and clued [Begin something, or a hint to an arrangement formed by each pair of starred clues’ answers]. In each pair of starred answers (all of them familiar phrases), the top one starts with a word that is the name of a Broadway show, and the one underneath it ends with a word that is a rough synonym of road. In each case, the show and road name line up exactly which is an elegant touch. I won’t list the clues here for brevity’s sake, but they’re mostly straightforward.

What an elegant execution of a wonderful theme. Fun choices in themers and everything flowed so smoothly. Very impressed with this grid.

And the fill has plenty of highlights as well: HOISIN sauce, EYE MAKE-UP, CRUELLA, an internet SPEED TEST (and an OUTAGE), OFF SITE, LATE FEE, SHE-WOLF, NO DRAMA Obama, and MOCAP (motion capture), which I’ve heard used before but have never seen in a grid. All this and nary an ounce of dreck. Very nice.

Theme: Each theme answer is a phrase in which the first letters of each word spell out TBS. 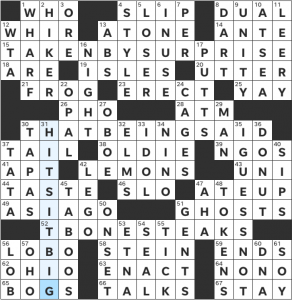 To me, the most satisfying element of this theme is the way that moving down the grid, each theme answer tapers off, with TAKEN BY SURPRISE spanning the whole of the grid and T-BONE STEAKS indented in by two squares at each side. I imagine T-BONE STEAK’s hyphen here played a large role in getting a phrase that could spell out TBS.

The grid is also asymmetric, which was fun and definitely allowed for some additional flexibility. I felt like this was a very clean solve as I went through. In particularly, I enjoyed the fact that 44a [“Bite-sized sample”] TASTE was APTly placed above ASIAGO. Plus, the clue for ASIAGO (49a [“Cheese whose name starts with a continent”]) was very fun as well. Additionally, the two WH- words at the start of the Acrosses were fun as well, with WHO sitting just above WHIR.

I was ashamed to not recognize the state flag for OHIO for what it was in 62a [“Its state flag features a white circular O”]. I think I was perhaps too focused on its pennant shape.

A nice clean Sunday fill to kick off the week.

So very straightforward of a theme that I’m wondering why the theme clues are clued with a ? They don’t seem punny at all to me. I mean, SAINT PETER is literally the GATEKEEPER, right? Or am I wrong about my definition of GATEKEEPER?

As soon as I saw 60A twice referenced in the themers I jumped down there to find the word I was missing. Probably coulda named the puzzle “Gatekeepers” and had another themer in there.

Nothing much popped out in the grid for m. Liked the phrase “Digital DETOX” which is a new one for me, but a break from which I’m sure I could benefit. And our name-hidden-within-the-clue today is ALEC in kALE Chips!